This content was published: April 1, 2015. Phone numbers, email addresses, and other information may have changed.

Is Bigfoot roaming the forest at the Sylvania Campus? The PCC Monster Spotters Student Club says “Grebalsh!” (Bigfoot for “you bet!”).

“This is more significant than when we spotted the Loch Ness Monster in the Rock Creek koi pond,” said Club President Harley Anderson. “This time, it’s definitely not a swimming labradoodle. This is a real monster. It’s Bigfoot!”

The club was informed that a strange beast was roaming Sylvania’s Lesser Park by a team of city habitat scientists who were studying invasive plant species during spring break. The team ventured deep into the park’s forest on the hunt for various ivy infestations when the project lead came upon a creature in the middle of the trail. One of his researchers had a camera fixated on intermediate canopy foliage when he reared around and briefly caught footage of the monster. 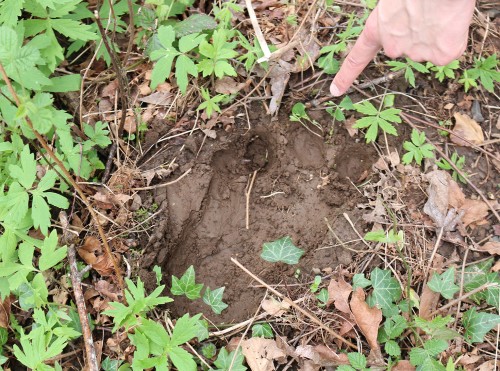 Proof! A Monster Spotters Student Club photograph of one of the many strange tracks they found among invasive ivy in Lesser Park. Tracks lead to a trap students made that is baited with M&Ms. They report no beast has been captured yet, though.

“It was gyrating and seemed out of its mind,” said Simon Quint, project leader for the team. “I was scared. We were maybe, 20 or 30 feet from civilization. If it attacked, we were really out of luck for any quick applications of Bandaids.”

At first, researchers weren’t sure what it was. After analysis of the film, zoology experts were torn if the creature is a new human subspecies, a non-human animal or a student in a mascot uniform. Further super-computer processing at a lab in Silverton determined that by the length of the individual’s legs and arms coupled with its new wave techno dance step style and self-assured hip-movement, they could safely determine that what the city habitat team discovered was, in fact, a Sasquatch.

“Yeah, no human dances like that, at least, not on purpose,” said lab technician Becky Alvarez. “And we know from science that mascots don’t dance that way unless in pain or about to pass out from being bungy-tethered to the rafters of an arena. So, the only other explanation is Bigfoot.”

The PCC Bigfoot discovery is the first film footage of a Sasquatch since the historic Patterson-Gimlin film from 1967 when adventurer Roger Patterson encountered a Bigfoot near Bluff Creek, Calif., and filmed it for about a minute. The college is now considering upgrading the Monster Spotters Student Club into a full-fledged academic program with a one-year certificate in Footprint & Polyester Fur Detection and a two-year associate degree in Sasquatch Dance Floor Behavior.

“This is historic,” said Anderson. “It clearly shows that Bigfoot is #thinkingPCCfirst and we are delighted.”

The Monster Spotters Student Club is one of many clubs on PCC’s campuses. Check them out at a campus nearest you and get involved!

For more on this evolving PCC Bigfoot issue, visit this webpage.

x by Julia Porras 7 years ago

x by Elizabeth Bilyeu 7 years ago

Love it! Thanks for the warning!!

x by Assad 7 years ago

x by Cynthia 7 years ago

x by sheila 7 years ago

Did you make a plaster of the print? Perhaps it should be on display–a very big find.

x by Josephine 7 years ago

If anyone can get close enough to pull off some fur, I’ll have my Biology students use DNA bar coding to determine the species.

x by Kenny GR 7 years ago

I’ve sometimes felt something watching me from the woods in my classes on the periphery..now I know why.

x by Brady 7 years ago

Great there goes any Ch of parking in a timely manner ever again.

x by Tracy 7 years ago

As a long-time Bigfoot “hunter” (camera only, nothing harmful), I love everything about this!

x by Karen Kane 7 years ago

x by Jill Nicholson 7 years ago

I recognize that as one of my advanced writing students.

x by Jenn 7 years ago

What are the pre-reqs for admission into the Footprint and Polyester Fur Detection Certificate Program? (I’m, um, asking for a friend…)

x by Julia Porras 7 years ago

I looked everywhere for this club, and I can’t find any info on it yet. Please notify me when you have your meeting dates. I really want to participate.

x by Kaite Thompson 7 years ago

This is a job for a “Grimm”. I’d say more likely “vessen” than bigfoot.

x by sandra bailey 7 years ago

Now that is funny and cute!

x by Ana Sacramento 7 years ago

If the “monster” is caught, the MLT students would love to have the chance to analyze his/her body fluids. I know that the Vet Tech students probably want the specimen first so please, leave some for us!

x by Andrew 7 years ago

Do the credits within the Associates of SDFB degree transfer to PSU?

x by KAT 7 years ago

Hey, I live near Sylvania! I just caught the beast fishing in my Koi pond! He tried to get my prized 40 pounder Big Moby. However that fish is pretty smart. This large furry beast is no match for my scaly one. Thankfully, I arrived just in time to see the oversized strange look creature as he was about to himself to the contents of my refrigerator.

“Get the broom Frank! Scat you beast!” He looked at me with those big eyes and I could not help but give him a rub behind the ears and some kitty kibbles from my stash. After he felt warm and fuzzy from the free meal, I told him he needs to wait for an invite before showing up with his paws in my pond or my cupboards. He happily loped away while patting his belly and headed in the direction back to Sylvania campus.

x by big fool 7 years ago

x by JCUR 7 years ago

I saw two squatch this morning near the lower entrance that would validate yesterdays sighting.

x by Julia C 7 years ago

I was just checking my e-mails and I spotted you clip. Thanks I needed the giggle. I am going to have to go to the Sylvania campus now just to hunt big foot. BTW I am no kid lolol!!!!

x by Alex 7 years ago

x by Rob Wagner 7 years ago

This video is the gift that keeps on giving…remarkable feet, er, feat.

x by News: 2015 Video Highlights: From Panther hijinx to graduation, this year’s list has it all | PCC 6 years ago

[…] Published on Mar 20, 2015: Habitat Team members accidentally capture footage of a strange creature in the forests of Sylvania Campus. Is Sasquatch really lurking at the college or is it another beast enjoying nature? You decide. […]