This content was published: March 30, 2015. Phone numbers, email addresses, and other information may have changed.

Cascade Job Fair to have many ‘dream’ features for job-seekers

With hiring on the rise and employment returning to pre-recession levels, the 2015 Cascade Job Fair, presented by Brooks Staffing, is poised to be a bigger opportunity than ever to Portland-area job-seekers.

“This is the best time in years to be looking for work in Portland,” said Becky Washington, director of career services at Portland Community College’s Cascade Campus and lead organizer of the job fair. “Employers in nearly all sectors of industry are hiring, and there’s a new energy in the tech community to open things up to women and people of color.” 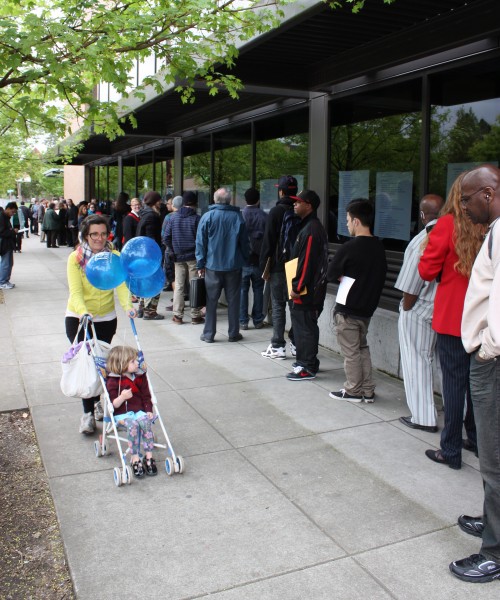 Get to the Cascade Job Fair early or risk being in line around the block when doors open.

New to this years’ event will be a special job-search resource that is unavailable anywhere else. The tech startup DreamPath, the job fair’s social media sponsor, has created an interactive employer database that will “ping” a job-seeker when an opening becomes available that matches a set of custom parameters that they set up. DreamPath is partnering with the Cascade Job Fair to provide a special interface comprised solely of participating employers.

Returning to the job fair this year will be the popular “head shot” service, free for the first 100 attendees, where job-seekers can get a professional close-up photo for use in online networking and more.

“I’m so excited that we will again be able to offer free photos for social media profiles,” Washington said. “Last year’s attendees raved about the great quality of their pictures. We will serve the first 100 people on a first-come, first-served basis.”

Also returning to the fair this year are a series of helpful seminars on topics like networking, resume-writing, interviewing tips, seeking job satisfaction, and more. In addition, the fair is continuing its emphasis on social media with a special seminar on incorporating the power of social media sites – like Facebook and LinkedIn – to broaden a job searcher’s reach and enhance their chances of success.

“The job fair places job-seekers face-to-face with employers from a wide range of industries in both the public and private sectors where they can learn about available openings, pay scales and benefits, and the amount of education needed to obtain a given position,” she added.

Among the employers represented at this year’s fair will be Legacy Health System, New Seasons Market, Hoffman Construction, Portland General Electric, and a host of local government agencies, to name just a few.

“Clark County has attended the Cascade Job Fair for the last seven years and it is one of the best job fairs year after year in the Portland Metro area,” said Leslie Harrington Smith, human resources representative for Clark County. “The diversity and the excellence of the attendees is hard to find elsewhere.”

Would-be employees are encouraged to dress as if going to an interview.

“We attract lots of job-seekers, so it’s also a good idea to show up early,” Washington said. “It’s no secret that the job market is hotter right now than it’s been in a long time. People should try to give themselves every advantage they can.”