This content was published: December 22, 2014. Phone numbers, email addresses, and other information may have changed.

Photos and Story by Amy Mintonye

The Trades and Industry program moved from its former location at Cascade Campus to its new home on Swan Island earlier this year and officially opened to students for the Fall 2014 semester.

PCC purchased the property from the State of Oregon back in 2010 with sights to expand career technical training opportunities in Portland, a priority in the plan for the college’s 2008 bond funds.  In addition to $5.4 million investment from the bond, the Oregon legislature authorized $1 million from the Department of Community College and Workforce Development.

The creation of the Swan Island Trades Center is a direct response to local businesses’ need for specially trained workers. The new Trades Center includes more than 20,000 square feet of new classroom and lab space and the latest equipment and technology. The college also maintains a welding classroom at Vigor Industrial‘s nearby shipyard.

One program seeing the benefits of the dedicated center is the Career Pathways HVAC Installation certificate program. Designed to quickly train students for an entry-level job in HVAC (heating, ventilating, and air-conditioning), the program now has the latest HVAC equipment to train on. Rick Willebrand, HVAC Installation instructor and the Trades and Industry Department Chair, says their new HVAC lab space has improved the quality of instruction. “The mock rafter area is larger and more realistic. We have new energy-efficient heaters, just like the ones they will be installing in people’s homes on the job.” 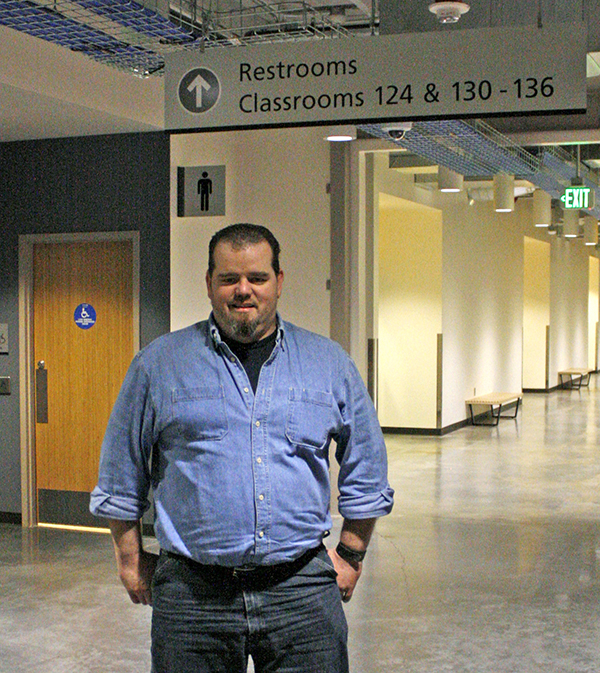 Student Levi Lacey has seen the difference the new Trades Center has made first-hand through his participation in the new Industrial Mechanics and Maintenance (IMM) Apprenticeship program made possible by the expanded space for the Trades and Industry program. Lacey, who has had the experience of studying in both the former Cascade Campus space while earning his Facilities Maintenance Technology (FMT) Associates Degree and in the new Swan Island Trades Center while pursuing his Industrial Mechanics journey card, agrees that the new trades center’s dedicated classrooms have improved the quality of instruction, “Before we only had 10 computers for our PLC (Program Logic Controls) class. Now we have an entire computer lab dedicated to the course.” Lacey has also seen the new community that has formed among Trades and Industry students. “The students here understand that you just came from work, which is why you’re dirty. They understand what that the loud noises coming from the next classroom are part of the class,” Lacey explains.

Lacey’s career in industry began when he realized his job as a bartender and bouncer was not offering the stability and security he wanted for his family. He looked to the trades for honest, hard work that would give him the tools to build a brighter future, and found an entry-level job in production at an aluminum extrusion facility.

Learning he enjoyed hands-on problem solving, he decided to further his job prospects by earning his Associates degrees in both Welding Technology and in Facilities Maintenance.

Always looking to the horizon for new opportunities, he decided to pursue the more advanced Industrial Mechanics and Maintenance (IMM) Apprenticeship program now offered at PCC thanks to the space available at the new Trades Center. Lacey secured an IMM apprenticeship in Land-O-Lakes Purina Division with help of Katrina Cloud, Apprenticeship & Training Specialist. Lacey will earn while learns in his apprentice program, which at the end of 5 years will earn him a journey card in Industrial Mechanics and a Limited Maintenance Electrical (LME) license.

In a true serendipitous fashion, at Land O’Lakes Lacey is being trained under two former Trades & Industry students that are now successful journeyman electricians.

While he has plenty of work ahead of him, Lacey feels optimistic. “You appreciate the things you work for,” he summarizes.