This content was published: November 24, 2014. Phone numbers, email addresses, and other information may have changed.

For Portland Community College students LiShao Chen and Keith Jones each new building at the Southeast Campus has had an impact on them and their southeast Portland community. 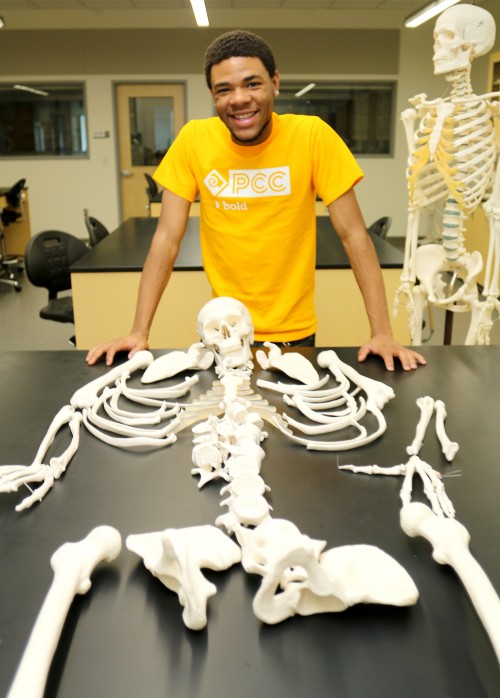 For the 24-year-old Keith Jones, a budding physician and philosopher, the Student Commons represents more space for his science labs and math classes as he works toward an Associate’s of Arts Oregon Transfer Degree.

Take the the Student Commons, which is a three-story, 66,000-square-foot structure finished last spring that houses an expanded bookstore, an Answer Center for all students services, five science classrooms/labs, six general purpose classrooms, four career technical education/computer classrooms and a new STEM center. For the 24-year-old Jones, a budding physician and philosopher, the building represents more space for his science labs and math classes as he works toward an Associate’s of Arts Oregon Transfer Degree.

“It has that very science feel to it, and the math department is there which is important to me,” said Jones, who plans to be a surgeon and has interests in sociology, philosophy and psychology. “But what I like about that new space is that it gives a lot of people way more flexibility in choosing their classes and a place where they can go to for help.”

For Chen, the Library has made her academic life much easier. In addition to the traditional library services, the three-story, 40,000-square-foot facility contains the Student Computing Center, Student Learning Center (including tutoring services), Volunteer Literacy Center, four classrooms and study areas. A first-generation scholarship student, 21-year-old Chen has been impressed by the expansion of library services and student help within the new facility. She is aiming to earn her associate’s degree at Southeast with the goal of someday becoming an academic advisor.

“We finally have a library that has books in it,” she laughed. “You don’t have to wait for them to deliver books you need from another PCC campus. Now I can go up to the third floor and check out the books they have. Before I had to check them out online and wait for them to be delivered from another campus. It’s really nice now.”

Both Chen and Jones said the buildings are symbolic of something much bigger for students.

“Students can earn their associate’s degrees right here in their own backyard,” Jones added. “People felt the Southeast Center was really cramped before, but now it’s a space that’s big enough to be a community, but not so big to where you get lost. It has a community feel.” 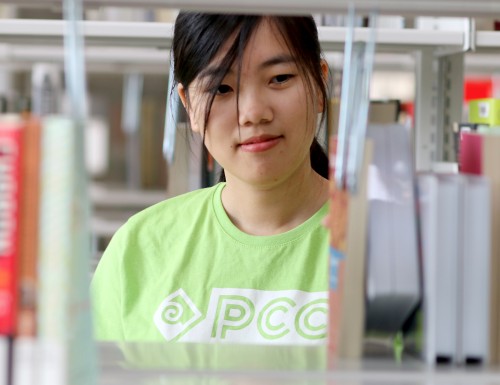 A first-generation scholarship student, 21-year-old Chen has been impressed by the expansion of library services and student help within the new facility.

That is just what founding Portland Community College President Dr. Amo DeBernardis wanted for southeast Portland. Since PCC began in 1961, DeBernardis (“Dr. De”) envisioned that there would be a major campus in every corner of the metro area. From starting out in rented classrooms at the old St. Anthony School on Southeast 78th Avenue to the former U.S. Corps of Engineers Building on Southeast 82nd Avenue and to its current location on Division Street, the Southeast Center has offered a variety of instruction since the 1970s. With the passage of the $374 million bond measure in 2008, the college had the funds to finally transform the center into a full service campus, an accomplishment celebrated by PCC’s newest leader.

“The energy surrounding the transformation of the college’s Southeast Center to its fourth campus is palpable,” said President Jeremy Brown. “At long last we’re able to bring a full menu of offerings, in terms of technology, courses, facilities and services, to our students and staff at Southeast. Instead of a two-building center, there’s now a feeling that this is a real college campus.”

One of the biggest impacts has been the expansion and additions of academic tutoring and student resource centers. Before campus expansion, the tutoring services occurred in a small room within Mt. Tabor Hall and was always packed with students wanting to meet with tutors.

“You had to wait,” Chen remembered. “It was always full, and you had to put your name down and come back later. It’s nice to now have the space where we aren’t packed into a really small room.”

This improvement in services and expansion of study space is having a positive effect on students, and that has a much larger impact on the community at large, Jones said.

“I like seeing the change in the community,” he said. “The students have changed their outlook on how they are going to do their studying with the addition of the new buildings. Now our mindset is going to grow and it’s going to reflect the growth of this campus. I think there is a really good future for this community.”

x by Jennifer McBratney 6 years ago

Thank you James for such a great story. Plus the pictures are a wonderful addition. LiShao and Keith are wonderful students, and I’m so glad they have the facility to increase their potential at PCC. The new facilities does help improve the campus, but it’s students like these two that make the SE community have a bright future. Nicely done.

x by Jessica Howard 6 years ago

The best way to understand the impact and promise of the expanded Southeast Campus is through the experiences of its students. Keith and LiShao, thank you for sharing your thoughts in this article! All of us at PCC-SE are proud to be able to better serve students like you.

[…] writers, thanks to the recent expansion of the campus, have a lot more classroom and study space to utilize as it expands the number of classes offered. […]