This content was published: October 3, 2014. Phone numbers, email addresses, and other information may have changed.

History shows us that change typically happens slowly. Only on occasion is it punctuated by moments that clearly show a break with the past, a tipping point after which things are never the same again.

A student in PCC’s Paralegal Program at the Cascade Campus, though, didn’t just experience such a moment – she was the moment. By all accounts, Mia Macy was a success in her previous career. A military veteran, she was a competent officer with the Phoenix, Ariz., police department, so much so that she had risen through the ranks to become a detective. In 2010, when a lucrative job opportunity in California arose with a federal contractor, she jumped at it. 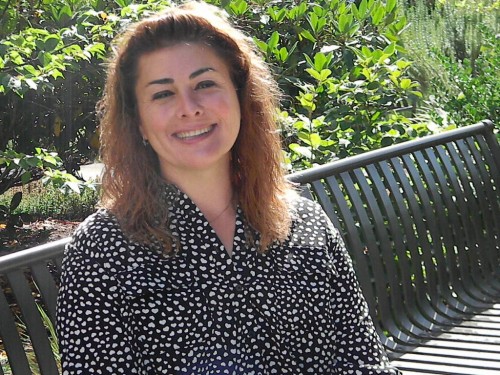 Since the decision, Macy has traveled and spoken about her case around the country, most notably at Harvard Law School. She will tell her story to the Portland community from 4-5:30 p.m., Thursday, Oct. 16, in the Moriarty Auditorium at Cascade.

“I liked being a detective,” Macy recalled. “I spent a lot of years doing it … and I was good at it. But, this was a great opportunity so I went for it.”

All went well, and the contractor – which operated laboratories for the federal bureau of Alcohol, Tobacco, and Firearms (ATF) – offered her a job as a ballistics forensics technician in the San Francisco Bay area pending the outcome of a background check. Macy began her preparations to relocate to California, and waited to hear back from her soon-to-be employer.

And waited. She wrote and phoned multiple times, but the contractor was incommunicado for weeks. Macy wasn’t sure what the problem might be, but she had a pretty good idea — when she had been recruited for the job, and submitted the requisite documentation, Macy had been a man. At the time she was offered the job, and when the background check was being conducted, she was about eight months into her transition to being a woman. In the eyes of the law, she was legally a woman.

Suspecting that her would-be employer might be avoiding her because of her transgender status, Macy went to the nonprofit Transgender Law Center for help – but their attorney was stonewalled as well. Finally, after months of silence, she received a brief e-mail stating that the laboratory job in California had been cut due to budgetary constraints, but that a receptionist position was available for her in Seattle.

Frustrated, Macy filed a discrimination complaint with the Equal Employment Opportunity Commission (EEOC) and embarked on a voyage that would ultimately change the playing field not only for herself, but for transgender men and women across the nation.

Her initial complaint with the EEOC met with failure. The ATF – which, as a federal agency, must answer for the employment practices of its private-sector contractors – conceded that while the lab may have discriminated against Macy, transgender people weren’t protected by federal anti-discrimination laws. She was denied her day in court.

Appalled that someone could be legally discriminated against because of his or her transgender status, she filed an administrative complaint (a more serious step than her previous action) with the EEOC on the grounds that despite the fact that she had once been a man, she was now a woman – and what had happened to her amounted to gender discrimination.

The problem was how to address the fact that transgender people lived in a sort of legal limbo where they existed somehow outside of the traditional binary conception of gender, and were thus denied any gender-based legal protections. Macy recalled a moment of revelation in which she came up with the language that helped her and her attorney to crack this legal nut.

“I was filling out [legal] paperwork on the hood of my car,” she said. “I crossed out the words ‘gender discrimination’ and replaced them with ‘does not conform to gender stereotyping.’ It turns out that this was the first time that anyone had described transgender discrimination in this way.”

And it worked. Her case, Macy v. Holder, prompted the EEOC to affirm that transgender people are entitled to legal protection under Title VII of the Civil Rights Act of 1964. This, in turn, sent the case back to the Department of Justice – which is charged with investigating discrimination cases within its own agencies, such as ATF. This entitled her to a formal DOJ investigation of the circumstances surrounding her employment situation.

The investigation’s findings were released in 2013, and determined that she had indeed been discriminated against for the California job. It turns out that the position had never been cut, and had in fact been offered to a man with a previous criminal history.

This, along with the EEOC’s ruling, prompted two executive orders from President Obama. The first extended nondiscrimination protection to transgender people working for the federal government – and its contractors – while the second instituted mandatory transgender awareness training for federal employees. Macy joined the president in the White House when he signed the orders earlier this year.

As a result of the decision, any transgender employees among the roughly 28 percent of the nation’s workforce that are employed either by the federal government or one of its contractors are now legally protected from discrimination.

While her legal odyssey played out, Macy found her way first to the San Francisco area and – after being unable to find work in Bay Area law enforcement – then to Portland, where she enrolled in the Paralegal Program at PCC’s Cascade Campus. Her experience has definitely piqued her interest in the legal world, she said, and she’s looking forward to interning with a legal defense team after she finishes her studies at PCC. After that, law school is a possibility, she said.

Since the decision, Macy has traveled and spoken about her case around the country, most notably at Harvard Law School. She will tell her story to the Portland community from 4-5:30 p.m., Thursday, Oct. 16, in the Moriarty Auditorium at Cascade.

“I look at Macy v. Holder as a win for society, but it was great for me personally to prove discrimination,” Macy said. “This decision will protect people 150 years from now.”

x by Frances Fagan 8 years ago

What a great example of how self-advocacy can truly benefit society as a whole! Thank you so much for your bravery AND persistence Mia.

x by Traci Simmons 8 years ago

Mia Macy is an amazing person, who turned her personal struggle into a change for the betterment of society. Keep up the good fight, because it is not over yet!

x by mia macy 8 years ago

x by Cara Finlayson 8 years ago

You and your successful actions define perseverance and courageousness. You are an inspiration to me. Thank you.

x by Mia Macy 8 years ago

x by Myra Swift 8 years ago

Thanks for making progress for the rest of us trans ladies! Without women like you I never would have had the courage to apply to PCC under my chosen name and my real identity!

x by Mia Macy 8 years ago

x by Emma Snodgrass 7 years ago

But there’s a receptionist position open? Did they travel back to 1950? So glad there was a happy ending. And way to keep your cool through all that. I would have been spewing fire from my ears.