This content was published: June 17, 2014. Phone numbers, email addresses, and other information may have changed.

Bringing cultures together over a cup of tea 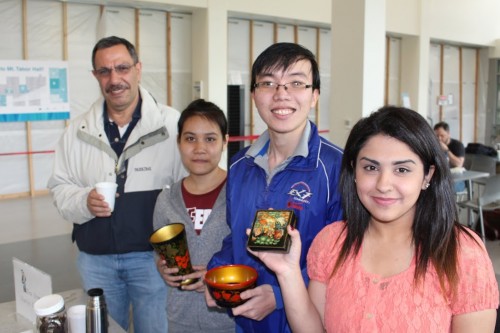 “Tea Transcending Culture” brings a diversity of people together over the bonding aspect of tea.

In late May during the lunch hour, Esther Loanzon, a long-time instructor at PCC’s Southeast Center, poured a cup of jasmine tea for students and staff from more than five different countries. In a corner of the Great Hall at PCC Southeast Center, 50 people came together to enjoy a shared moment that transcends their cultural divides and geography.

“I came up with the idea of hosting these tea events at the Southeast Center as a way to increase cultural awareness,” Loanzon said. “In 2007, while attending a planning meeting for the Asian New Year event that PCC Southeast Center annually hosts, I asked the group made up of students, staff and faculty how other cultures at Southeast Center – and in Southeast Portland – are represented in the event. Members of the group acknowledged that PCC’s Asian New Year event focuses primarily on Asian cultures and that it didn’t fully represent other cultures reflected in our student body and surrounding communities.
“For me, a light bulb lit up,” she added. “Why not look at a tradition that brings more diverse cultures together? There is so much potential at Southeast Center, with more than 45 languages spoken at this campus.”
Loanzon landed on the idea that drinking tea is often seen as a binding factor for many cultures. She took her idea to Craig Kolins, the dean of instructor at Southeast Center, who agreed and encouraged Loanzon to coordinate a campus-hosted event. She immediately set to planning and hosted the first “Tea Transcending Culture” event in spring 2007.