This content was published: February 20, 2014. Phone numbers, email addresses, and other information may have changed. 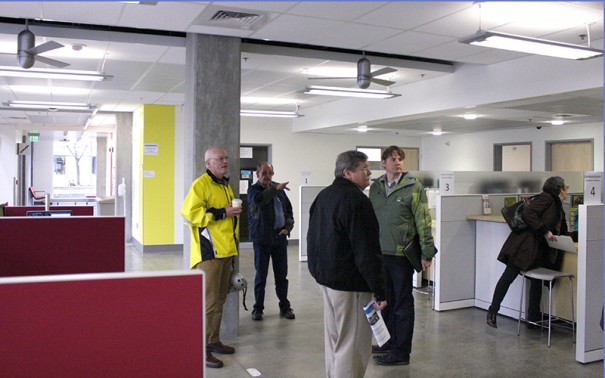 With more than $48 million being invested in new and renovated educational spaces, PCC Southeast Center is making significant changes. Add to that plans by Metro, the regional government, to build a high capacity transit line which could directly serve the campus, SE is poised to become an even more visible and important component in the neighborhood.

“I’m excited about the investments PCC is making at Southeast Center,” said Metro Councilor Bob Stacey, who toured the campus Wednesday, Feb. 12. “The new Student Commons is a boon to the residents in that portion of my district. Having the library open to the public and adding new educational opportunities close to where people live is exactly what we need,” he added.

The campus features two new buildings, in addition to renovations to existing structures. The 66,000 square-foot Student Commons will house an expanded bookstore, several classrooms, a new Answer Center for better student service and a new STEM center (science, technology, engineering and math). The 40,000 square-foot Library will include centers for Student Computing, Student Learning and Volunteer Literacy, as well as independent and group project or study areas.

On the tour, PCC Southeast Center Bond Project Manager Bill Stauffer shared some of the finer points of the new construction, including the unique shared heating and cooling system between the two new buildings. Energy efficiency is chief among the many goals of the 2008 voter-approved capital construction program. In addition, PCC Bond Stakeholder Engagement Manager Gina Whitehill-Baziuk provided the thinking and current status of the college’s effort to activate community development opportunities with ground-floor commercial spaces built into the Student Commons. Stacey welcomes the retail spaces, which face SE 82nd Avenue.

“Street-level retail is very rare in that area of SE 82nd, so a fresh new building, with local service to PCC’s 20,000 students, neighbors and people passing through is a great opportunity. I have high hopes for that area of southeast Portland to be a real people place,” he said, “and I’m very grateful for PCC’s work.”

Stacey noted that TriMet’s current bus lines in the area – the north/south Killingsworth-82nd Avenue and the east/west Division-Fessenden are the region’s most used transit lines, with a combined usage of nearly 200,000 boardings per week.

“The opportunity to connect two busy transit lines to high capacity transit will make the campus an instant hub for the neighborhood,” he said. “If the Powell-Division Transit and Development Project is built, I think ridership will grow, and even more people will be able to get to SE Center,” he said.

High capacity transit makes fewer stops, travels at higher speeds, has more frequent service and can carry more people than local or neighborhood public transit. Metro is studying a possible high capacity line along sections of Division Street and Powell Boulevard, as well as station locations. It is likely that a major station will be located on SE Division Street, prominently serving the SE campus. 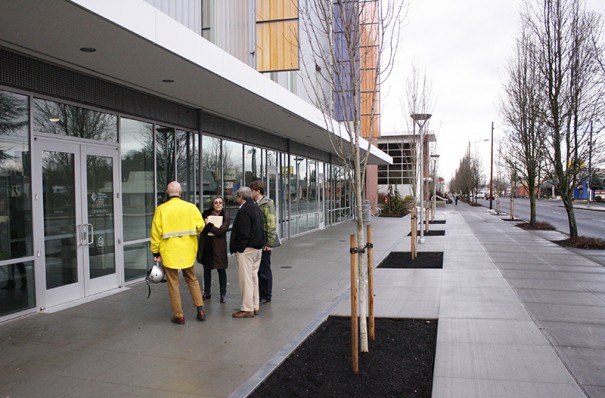 PCC Southeast Center will host a public meeting for the Powell-Division project Thursday, Feb. 27, from 6 to 7:30 p.m. The study will help determine the route and location for stations, which can become important community anchors. Southeast Center’s new Library and Student Commons, which flank the northeast corner of SE Division Street and SE 82nd Avenue, have the possibility to become a hub of activity for this vibrant area if a station were to be located at or near the intersection.

Learn more about the Powell-Division Transit and Development Project