This content was published: November 18, 2013. Phone numbers, email addresses, and other information may have changed.

Jaune Quick-To-See Smith will speak at 7 p.m., Thursday, Nov. 21, in the Performing Arts Center, Sylvania Campus (12000 S.W. 49th Ave.). Admission is free and the public is welcomed. Parking is also free at the campus. The lecture will be followed by a Q & A moderated by Kat Griefen, who is co-owner and director of the Accola Griefen Gallery in New York. 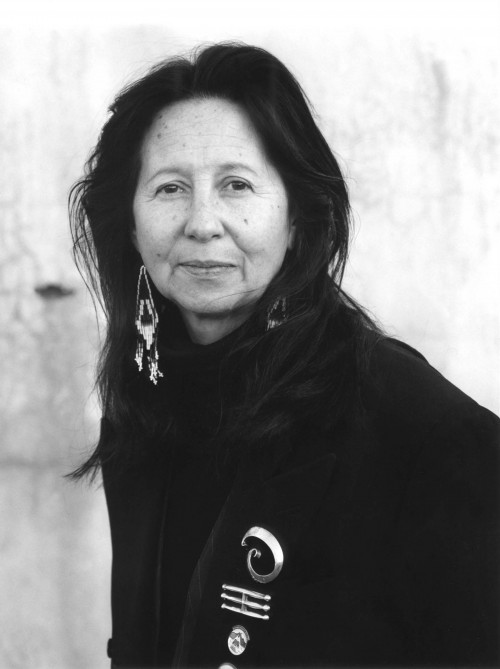 Smith’s lecture is the third for PCC’s Portland Women in Art Lecture Series, which was founded in 2010.

“I am a Native American from the plateau, grew up in many places around the Pacific Northwest with my father who was a horse trader,” Smith said. “Coming to Portland gives me great joy as it feels like a homecoming. I am looking forward to seeing old friends and meeting new ones.”

Smith’s talk “My Life as a Cultural Arts Worker” will address not only her artistic process, but also the complex political and cultural symbols as well as narrative elements she weaves into her paintings, prints and other works. Her paintings and prints combine images and texts that reference contemporary issues as well as Native American history, art, oratory, and mythology. Her work is political as it takes a clear-eyed look at such topics as environmental destruction, reservation politics, the legacies of colonialism, imperialism, and the disasters of Manifest Destiny. But Smith is first and foremost an artist, and the aesthetic strength of her works, with their rich surfaces, passages of abstraction, evocative imagery and sinewy drawing, is as important as the messages her works convey. Smith is represented by Accola Griefen Gallery, New York.

Her career as an artist, curator, and teacher spans five decades. She earned a bachelor’s degree in Art Education from Framingham State College in Massachusetts and a master’s degree in Art from the University of New Mexico. In addition, she holds four honorary doctoral degrees.

Recent awards include a grant from the Joan Mitchell Foundation to archive her work, the 2011 Art Table Artist Award and the Moore College Visionary Woman Award for 2011, among many others. Smith’s work is held in museums worldwide, including the Smithsonian American Art Museum, the Whitney Museum of American Art, the Museum of Modern Art, the Museum for Ethnology in Berlin and the Victoria and Albert Museum in London. She is an enrolled Salish member of the Confederated Salish and Kootenai Nation in Montana and was born at the Indian Mission on her reservation.

Smith’s lecture is the third for PCC’s Portland Women in Art Lecture Series, which was founded in 2010. The goal of the series is to present important women in the visual arts to the students and faculty of Portland Community College as well as to a larger Portland audience. The project focuses on pioneering feminist artists and women significant in the fields of art and art history. In 2011, Carolee Schneemann’s performative lecture, “Mysteries of the Iconographies,” inaugurated the series. Last year Charlotta Kotik, Curator Emerita of the Brooklyn Museum, spoke on the work of sculptor Louise Bourgeois.

For more information on this event, contact Marie Sivak, art department chair and chair of the Portland Women in Art Lecture Series organizing committee, at (971) 722-8314.

American Sign Language Interpretation will be provided and venue is ADA accessible. If you need other accommodations, call (971) 722-8334, or email christine.weber15@pcc.edu. Please make requests by Thursday, Nov. 14.

There is tremendous excitement at Portland State about Jaune Quick-to-See Smith’s upcoming visit! And we’re looking forward to meeting her gallerist Kat Griefen as well.

x by Elizabeth Bilyeu 7 years ago

This will be a spectacular evening! We will hear a voice from a feminist artist whose work is discussed in our art history textbooks and art journals. The 2011 lecture-performance by Carolee Schneemann was quite provocative, and the packed auditorium was enthusiastic. I look forward to Jaune Quick-To-See-Smith’s wisdom about art and cultural identity!

x by Geoff 7 years ago

I don’t attend many events like this (too busy!) but I’m really looking forward to hearing Jaune Quick-to-See Smith talk about her work. Thanks for bringing this amazing artist to Portland, PCC!

This is a fantastic opportunity to hear from an internationally recognized artist about her life trajectory. I encourage students to attend and I expect to see my students on Nov 21st. You won’t want to miss this evening!

x by Ovidiu 7 years ago

What an interesting artist! I am excited about the lecture. Thank you to the PCC art program for bringing such a distinguished artist to Portland.

x by Larry Cwik 7 years ago

Looking forward to this talk – thanks PCC for bringing her here.

x by Granville 7 years ago

It is wonderful to see PCC bring an international, renowned artist to campus for a lecture. What a wonderful opportunity for the students and great benefit to the school.

x by Jennifer Callcott 7 years ago

Just wonderful. This is a tremoundous accomplishment for the PCC art program.

x by Jennifer Sivak 7 years ago

This is very exciting. This really reflects highly on the PCC art department and their chairman.