This content was published: April 24, 2013. Phone numbers, email addresses, and other information may have changed.

PCC Board confirms Jeremy Brown as its next president

Portland Community College’s board of directors has confirmed the selection of Jeremy Brown as the college’s next president.

The announcement was made at the monthly board meeting on Thursday, April 18, at which Brown’s contract was ratified. He will begin his work with PCC on July 1, replacing Preston Pulliams, who is retiring June 30 after serving as president since 2004. 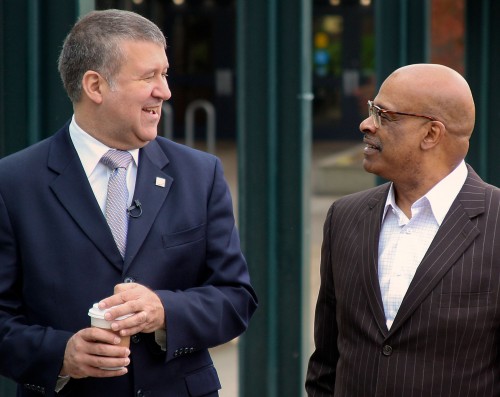 “The board of directors is united in its choice of Dr. Brown as the strongest contender to build on the success PCC has achieved under Dr. Pulliams’ leadership and to lead the college to even greater success through the challenges and opportunities ahead, ” said Denise Frisbee, chair of Portland Community College’s board of directors and co-chair of the college’s president search advisory committee. “Dr. Brown is a collaborative leader skilled at creating strong internal and external relationships; a polished communicator who is insightful and inclusive; a quick learner talented at navigating new environments with new players; and an innovator who will look for opportunities to strengthen PCC, even when budgets are tight.

“These are the skills and talents that PCC’s board of directors wants and needs in its next president,” added Frisbee.

A native of Manchester, England, Brown has served as president of Dowling College on Long Island and of Edinboro University of Pennsylvania, part of the state’s public university system. At Dowling, Brown helped support an increase in applications, retention, annual giving and a variety of new academic programs. During his four-year watch at Edinboro, the university saw record high enrollment, retention and annual giving. Brown’s tenure there also included oversight of more than $200 million in new and future construction projects.

Prior to these roles, Brown was the provost and vice president for academic affairs at the State University of New York in Canton from 2003 to 2007. In addition to four-year degrees, SUNY Canton offers two-year degrees in a variety of technical education disciplines – dental hygiene, early childhood, veterinary science technology and criminal justice, among others. This experience enabled Brown to understand the critical importance of workforce development and career technical education, as well as the institution’s role in preparing students to transfer.

Before SUNY Canton, beginning in 2000, Brown served as the chief executive officer of Florida State University-Panama, an American university in Latin America, where he learned to speak fluent Spanish. 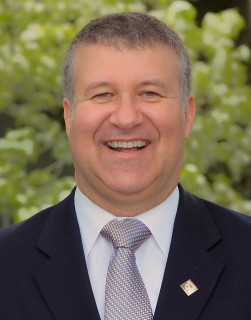 ‘I am thrilled to be coming to Portland to lead PCC at this time and, thanks to the excellent work of Dr. Pulliams, I am fortunate to take the helm of an institution that has an exceedingly strong foundation,’ said Brown.

“I am thrilled to be coming to Portland to lead PCC at this time and, thanks to the excellent work of Dr. Pulliams, I am fortunate to take the helm of an institution that has an exceedingly strong foundation,” said Brown. “From a very personal standpoint, I understand the power of higher education and the doors to opportunity that can open because of it. At the age of 13, my father dropped out of school so that he could help support his family financially. My mother returned to college to be trained as a special education teacher. However, both my parents recognized the value of education and pushed us to excel academically. Being raised in England, I was incredibly lucky to have been selected to attend university on a full scholarship.

“I know, at my core, the value of what higher education can do for students,” added Brown. “And as a former faculty member, I have first-hand knowledge of the challenges faculty face, what students need, the questions they have, and what motivates them to learn. I am beyond excited to apply my experience to PCC and to learn from the exceptionally dedicated faculty and staff at PCC as I become acquainted with the college.”

He added that his family – wife Rebeca and four-year-old son Andrew – can’t wait to move to Portland this summer, where they’re sure to become avid Portland Timbers fans.

In addition to authoring several scholarly papers and articles, he was a visiting scientist at the University of Manitoba, Oxford University, and the National Accelerator Centre in Cape Town, South Africa. Brown made the transition into academic administration when he became associate dean of the graduate school at Yale University, followed by a return to Princeton as the associate dean of faculty.

“Oregon is on the cusp of a paradigm shift, with pending education reform requiring even further collaboration among community colleges and universities,” said Frisbee. “Dr. Brown’s extensive administrative and instructional experience across all higher education sectors will be an asset to PCC as we work to improve coordination across institutions and increase student success in order to meet the state’s aggressive higher education goals. Exciting times await PCC, and the board of directors is confident that Dr. Brown is the right choice to lead PCC through these times.”

x by Russell Banks 8 years ago

Welcome to PCC, Dr. Brown. Here’s to a conversation that’s in line with our values, hoping we can balance respect for the “dignity and worth of each individual” with “open and honest communication.” PCC’s come a long way, and has an even greater future ahead if we stay focused on serving our community.

x by Rob Wagner 8 years ago

Welcome aboard! I’m hoping that Dr. Brown’s Manchester United’s club good luck will rub off on our Timbers!

x by Russell Banks 8 years ago

x by Eli 8 years ago

Good luck Dr. Brown I hope you can help this institution prosper just like you did in Edinboro.

x by billy farrar 8 years ago

Welcome, but don’t forget you were a student too.

x by Jeneane Hamilton 8 years ago

Congratulations and welcome, Dr. Brown! I am very pleased by the board of director’s choice in your “coming on board.” I graduated from PCC in 1985, and have been quite happy(and impressed) with the board’s past choices for PCC’s Presidents.

Attention: PCC Office of the President

Thank you for your comments regarding my recent submission. As discussed in times past, I enjoy the learning environment offered through PCC and appreciate the D2L learning platform. My work is/was late as a result of stress and duress related to what is now shaping up to resemble a legal conflict with the Dean of Student’s.

I regret to inform you that I have been involuntarily removed from your class roster for Spring term 2013.

As it stands I have been prematurely suspended from attending PCC without due process and under false pretense. The social engineering tact being deployed by agency can only result in the full disclosure of the methodologies used by shady administrative agents and artificial corporate subjects alike, to deter students like me from applying our talent(s) towards academic objectives & real-time circumstances at hand.

I enjoyed your class content exploring the historic roots of our education system, and regret to inform you that there’s not much that has changed when considering the historic so called “civilizational advance” of western academic values.

Thank you for willingness to bend to my situation and lend me your ear. This has proven to be a most stressful facet of my experience attending a college who’s “lock down” mentality, surely represents the sign of the time, which clearly resembles that of police state.

It doesn’t take a genius to note that our institutions are rapidly being geared by state and federal authorities for martial law, and a complete melt down of what little is left of our civil liberties. I for one will continue to hold ground until the last shred of justice is compromised by third person parties, who’s intent is to crush all forms of individual self-expression and higher thought.

“Think links” and Google search for my references…

As a former navy seal, Governor, and professional wrestler I’ve learned how to act under pressure, but will Dr. Brown? How about when I’ve got him in a gogoplata chokehold?

We’ve read of your antics, Dr. Brown, and they are very disconcerting. We will defend our school with our large, muscly bodies and no amount of your non-gold-standard currency can protect you.

WWE Hall of Famer, and Fmr. Governor of Minnesota Jesse “The Body” Ventura

x by Michele Marden 8 years ago

These are interesting times for higher education in Oregon and nationally. Those who attempt to navigate the rapidly changing waters are courageous individuals.

Your comment about student needs and what motivates learning captured my attention– my curiosity is piqued! I hope more is shared in the months to come…

Good luck to you in Portland, Dr. Jeremy Brown! We remember you here, at Edinboro.

x by Michael Minkler 8 years ago

Welcome Dr. Brown! Look forward to working with you and seeing you around on campus

x by travis giobbi 8 years ago

In addition to some nice rhetoric about “success” and “education reform”, I’d like to know what the new president is going to do to increase state funding of community colleges, stop cutting courses and stop increasing tuition. Little else matters to us students, so good luck satisfying our needs, Dr. Brown.

x by Zoe 8 years ago

SUNY was my college where I studied in 1995 for my Doctorate Degree.

We need you and your innovating ideas, as well as your skills in making PCC more attractive to students.

We need your just input into all of the affairs of PCC life.

We rely on you!