This content was published: January 7, 2013. Phone numbers, email addresses, and other information may have changed.

Evan Chisholm can’t wait to have a taste of the stew at this year’s Portland Community College “Wacipi” (“They dance”) Winter Powwow.

“I’m really looking forward to this year as we have buffalo,” he said. “If you attend you are in for a treat.”

If you want to take him up on his offer just head on over (it’s free and open to the public) between noon and 9 p.m., Saturday, Jan. 19, in the Health Technology Building, Sylvania Campus. The powwow will feature drum groups and dancers from across the region, Native American crafts and food, activities for children, and raffle prizes. It is sponsored by the Sylvania Campus President, Powwow Planning Committee, Sylvania Multicultural Center, Sylvania Women’s Resource Center and the Native American Rehabilitation Association at Sylvania. 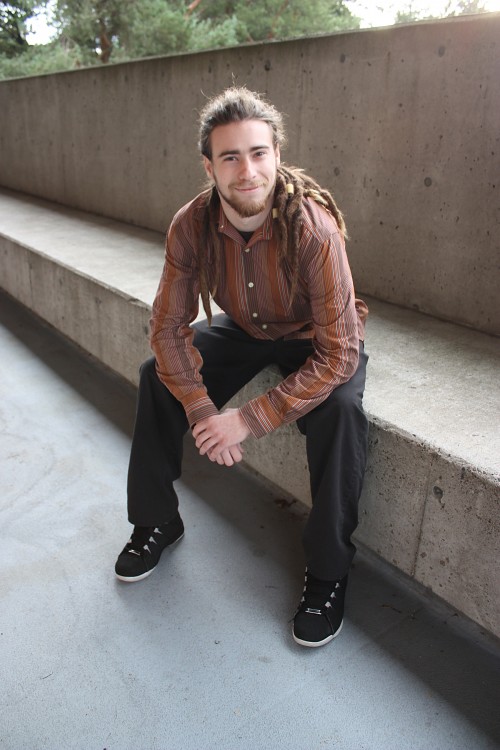 Evan Chisholm is heavily involved with this year’s powwow planning thanks to his volunteer work with the Sylvania Multicultural Center.

Chisholm is heavily involved with this year’s powwow planning thanks to his volunteer work with the Sylvania Multicultural Center. He has helped out with the center’s film series and fund-raised for the powwow. Because of his interest in community development this outreach comes natural to him.

“I was just blown away,” Chisholm said. “The social justice framework that (the Multicultural Center) has fits right on point with my community development goals. I don’t see how I could ever feel like I had before that school wasn’t taking me anywhere because coordinator Amara Perez and the center are taking me to where I want to go.”

The 23-year-old is in his third term with PCC, majoring in community development. He had studied at a community college in San Diego before moving to Portland, but got discouraged when he felt he wasn’t progressing toward his business degree. He left and took a few years off but then found his way to the Northwest and PCC.

“I didn’t want to be working the minimum wage jobs that are really hard to get by with,” said Chisholm, who earned an internship with the Sylvania Learning Garden through his sociology capstone class. “I saw that (PCC) has a really good transfer agreement with PSU, which has a nationally-ranked community development program. After finding that out I knew I needed to be back in school. This college has given me an opportunity that has been amazing.”

Born in California, Chisholm’s academic journey toward community development rather than business began in earnest when he started exploring options with the Peace Corps. An advisor at Portland State sat down with Chisholm, who doesn’t have an associate’s degree, to explore his options with the organization. However, it became clear to him that the Peace Corps would have to wait until later in life.

“I found out after speaking with the PSU representative that 90 percent of the positions available in this field are for people with a bachelor’s degree or higher,” he said.

Chisholm gravitated to PCC and its easy transfer pathway after investigating what it offered and finding plenty of opportunities to indulge in social issues, movements, and peace and conflict studies. Plus, the powwow fits into his Native American background as he has Sac and Fox, and Blackfeet heritage.

“It’s a culture I’ve always felt extremely connected to,” Chisholm said. “Ever since I went back for my great grandmother’s funeral in Iowa, I started really getting connected to it. It’s something that is bred into me, ingrained.”

Which is why he’s so motivated to help out with this year’s powwow.

“It’s an amazing culture event that you’ll never forget,” he added. “There is a free community dinner with buffalo stew, the drumming and dancing, and the whole feel of the space there is very spiritual. You definitely get a heartfelt feeling while you’re in the building and become very connected to the drums. Don’t miss out.”

Images from the 2012 Winter Powwow

[…] Read about a student who says the powwow comes natural to him. […]

x by Aracely Marrron 8 years ago

It’s great to be able to work alongside Evan in the Sylvania Multicultural Center. I can see the dedication and commitment put in by Evan on a daily basis. I can’t wait to see how the POW WOW turns out this year.

x by Susan Weston 8 years ago

I haven’t read the article yet, though it looks interesting. It’s the headline–splashed across MyPCC–that horrifies me! Powwow volunteer work should come NATURALLY, not NATURAL!

x by James Hill 8 years ago

Thanks Susan. Sorry you were horrified. But good catch. And we’ll actually use lowercase “Naturally.” We don’t use all caps in headlines. Might cause further horrifying.

x by Michael Walker 8 years ago

Right on Evan… Keep up the good work…

I can’t wait to attend the Powwow this year, thanks for dedicating so much time and effort into this project Evan~! Don’t forget to check out the Multi-Cultural center for more information and too see if they could still use some volunteers!!!

x by Daniel Peaine 8 years ago

Very nice article. I’m glad that I came across this as I hadn’t heard about it. I will be attending as my family are Sault St. Marie Chippewa of Michigan. My classes are at PCC-Cascade and I will ask others to attend also. The last Pow-wow I attended was downtown at Pioneer Square. It will feel great to see the culture celebrated in the city we live in. I wish Evan all the best with his future, as he experiences some of the rewards of the direction he is moving. Great job.

x by Jamie 8 years ago

How do we find out about future powwows in Oregon? Is there a fb group or a website?

x by Lucas Stillions 8 years ago

I wasn’t able to attend this years powow unfortunately for I was out of town. I read the article and thought that it was really great. My friend Joy attended and told me about it. I think that it is great that PCC does Powwows to bring people together from different nations. I cannot wait for the next one. Hopefully I’ll be in town.

x by Meghan Zimbrick 8 years ago

x by cedar westley 8 years ago

x by James Hill 8 years ago

Video production can tell you if that is available to the public or not… Email: mannus@pcc.edu.