This content was published: December 27, 2012. Phone numbers, email addresses, and other information may have changed. 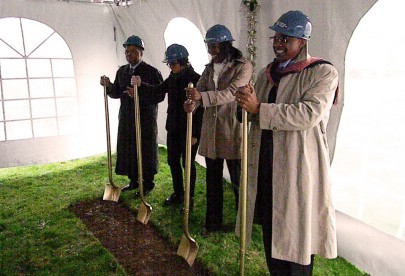 More than 100 stakeholders, including students, instructors and staff, braved the winter weather on December 11 to take part in a groundbreaking event for two new buildings – a student center and an academic building – as well as an underground parking facility at Cascade Campus.  People gathered under a white tent – and even hovered on the edges with umbrellas – to hear Dr. Algie Gatewood, Cascade Campus President, share his perspectives about the “growing excitement on campus” in anticipation of the new student union and academic building. 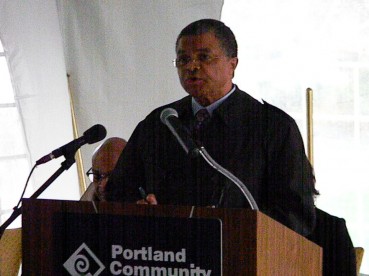 Dr. Algie Gatewood welcomed both campus and community stakeholders at the groundbreaking event.

“These new buildings … represent a wonderful collaboration between the campus and the community,” Gatewood said. “We reached out to our neighborhood and asked what they wanted to see – and, perhaps more importantly, what they didn’t want to see – from a new and improved Cascade Campus. Together, we created a campus that will meet the needs of students, faculty, staff, and neighbors alike.”

“Creating a solid infrastructure of student support can make the difference between succeeding or not succeeding in college,” said Cascade Student Body President Esther Forbyn. “These new buildings, especially the Student Center, will increase and enhance our ability to foster student success, and help students prepare for a better life to come.”

Campus and community members hover on the edges of the event tent with the protection of umbrellas.

Will Dann, a principal withTHA Architecture, the firm that designed the two new buildings and underground parking facility for Cascade Campus led the audience through a “virtual tour” of the future buildings and open space.

“Imagine yourself walking through the open space plaza between the new buildings,” he said. “You notice that the buildings are mostly wood and natural colors, blending into and being a part of the surrounding neighborhood while also exuding the feel of a modern educational institution.”

x by Kathleen Rowlands 7 years ago