This content was published: September 15, 2012. Phone numbers, email addresses, and other information may have changed.


As she walks through the two-story building peeking into classrooms, Christina Unga talks about her two loves — children and sustainability — and how her center is the result of decades of dreaming.

The ChildRoots Center for Young Children in Southeast Portland is built on the promise that raising young minds can be done with sensitivity to the environment. The alumna of PCC’s Early Childhood Education Program has found a niche with her approach to caring for children between the ages of six weeks and six years old. 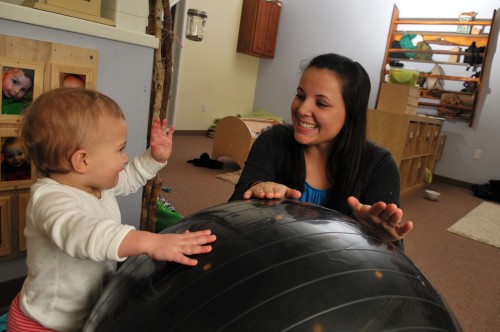 Christina Unga’s commitment to environmentally conscious living is apparent at every turn. Toys are made from wood, soft fabric or natural resources. Cribs, bouncy seats and other contraptions that bind babies won’t be found.

Her commitment to environmentally conscious living is apparent at every turn. Toys are made from wood, soft fabric or natural resources. Cribs, bouncy seats and other contraptions that bind babies won’t be found. Instead, children nap on mats on the floor and fussy babies are soothed in child-sized hammocks. The ceilings and walls are decorated with paper airplanes made from maps, origami birds, and crepe paper lanterns, especially important for young babes who spend so much time on their backs.

There is a full-time chef who cooks vegetarian, mostly organic and locally farmed meals for kids who impressively can tell the difference between kale and chard. Children drink from glass jars not plastic cups.

“I want this center to be a child’s home away from home and I want them to feel safe and secure,” said Unga, executive director and founder of ChildRoots. “I believe we do a lot of good things for the community.”

The waiting list to get into the school is long and it’s not unheard of for pregnant women to reserve spots months before their babies are born. Aside from the main center on Southeast 17th and Burnside, there are three in-home annex sites that share the same philosophy. All told, about 180 children flow into the main center and annex sites each week.

In many ways Unga prepared for ChildRoots her entire life. Growing up in Northeast Portland, she was the neighborhood babysitter who rarely passed up a job. As she got older she found work in a pediatric dental office.

She graduated from Jefferson High School and in the mid 1990s enrolled in PCC’s Early Childhood Education Program. In one class she designed her dream center. Aspects of that rendering are part of ChildRoots.

“I was so proud that I went to PCC because of what I learned from the instructors,” she said. “They knew their stuff and I wanted to be just like them.”

Her studies were interrupted when she got pregnant. After her son was born, she opened a child care facility in her home; her first of about a half dozen centers she went on to operate.

As an experienced child development expert with savvy business acumen, she ventured into the retail market by opening Fairies and Frogs Toys. She closed that store to open another child care center called Growing Seeds.

By 2007 she turned her attention to ChildRoots. She says that age and maturity brought her to the point where she knew exactly what she wanted in each of the 10 rooms. She worked on curriculum and trained teachers.

Her staff of about 40 now shares the load allowing her to slow down a bit. She also has plenty to keep her busy at home as she and her husband Moni Unga have six kids ages 14, 12, 10, 3, 2, and 1. The youngest three are recent adoptions.

Her philosophy for child rearing is simple yet eloquent as she finds herself a pioneer. Last July, The Oregonian wrote about the center’s healthy approach to food. Since then centers from across the country have inquired on how to create such a meal plan.

Gwenlyn,
Do you mean the Early Education program at PCC?

x by sequala 7 years ago

How do i get my 2yr old son in this program.

I want to add my children on the waiting list for the ChildRoots program, how do I do this?

This is absolutely awesome. How do I sign my almost 4 year old son up?
Please get back to me at your earliest convenience. Thank you!

x by Selena Pratt 7 years ago

This sounds wonderful. I want to sign my boys up as well.

x by Lacey Fluharty 7 years ago

Is there a website you can provide to us who want to look into this daycare?

x by Molly 7 years ago

x by Quinn Allan 7 years ago

x by Kathy H 6 years ago

CHILDROOTS IS AMAZING! LOOOVE IT! WORTH EVERY PENNY!ALL of their schools are crazy gorgeous! There’s TREES INSIDE the building! My kids love chasing the school animals around the playground. Goooo Christina!