This content was published: January 11, 2012. Phone numbers, email addresses, and other information may have changed.

Students use powwow, Native American Club to connect to culture

For Jessica Ditmore and Philip Hartman, their first-ever powwow experience was the Annual Traditional Powwow at the Sylvania Campus last year and they loved it.

“The drum circles were really interesting and the dancing, too,” Hartman said of what surprised him. “I didn’t realize how much dancing there was in a powwow as well.”

Ditmore liked the fact that the Northwest Indian Veterans Association Color Guard plays a big part in the day. 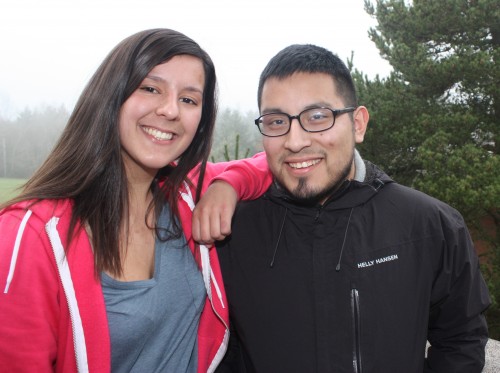 Jessica Ditmore and Philip Hartman are connecting to their Native backgrounds at PCC.

“The veterans talking,” she said. “I didn’t realize that was so much a part of powwows. So that was really neat.”

On Saturday, Jan. 21, the two will get their chance to volunteer for their second PCC powwow. The 13th edition of this community jewel will take place from noon to 9 p.m. in the Health and Technology Building Gymnasium, Sylvania Campus (12000 S.W. 49th Ave.). The first grand entry starts at 1 p.m. and the second at 7 p.m. In addition to drumming and dancing, there will be children activities, a college fair and a community dinner at 5:30 p.m. Admission and parking is free. There will be raffle prizes, Native American crafts and food vendors.

Ditmore (Oklahoma Cherokee, non-enrolled) and Hartman (Quecha, Inca) are both connecting to their heritage through the Native American Club at the Sylvania Campus as well as volunteering with the powwow. The club is a student group, they said, that provides a venue for them to meet likeminded students and share ideas, work on initiatives and support one another.

Hartman had been enrolled in the Men of Color Program through the Sylvania Multicultural Center, which first exposed him to PCC’s powwow. Ditmore is not only part Cherokee but is also Korean and Northern European. Both students are working on their Oregon Transfer associate’s degrees to move on to a four-year university.

“Growing up I’ve always was interested in reading about my culture and in college I’ve been more involved in the community,” Ditmore said. “For me it’s just an opportunity to be involved with the local Native American community and to eat Indian fry bread tacos.”

Hartman thinks the powwow is an excellent tool to expose people to Native traditions.

For information about the Native American Club, head over to the Sylvania Campus’ Multicultural Center in Room 202 of the College Center Building and sign up.

x by jared berkham 1 decade ago

I think the date for the winter powwow may be incorrect, because it says 2012.