This content was published: July 18, 2011. Phone numbers, email addresses, and other information may have changed.

Ngo, a math and engineering student at the Cascade Campus, earned a spot in NASA’s National Community College Aerospace Scholars Program where she got to learn about, and design, robotic rovers. This spring, she attended the agency’s workshop, all expenses paid, at its Jet Propulsion Laboratory in Pasadena, Calif. 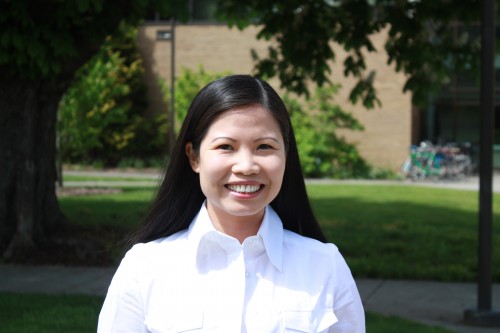 Ngo was one of 80 students from community colleges in 28 states and Puerto Rico that took part in two NASA workshops in Pasadena and the Johnson Space Center in Houston. The space agency’s program encourages students to pursue careers in science, technology, engineering and mathematics (STEM). More than 330 students nationwide applied.

“I’m grateful for the opportunity,” Ngo said. “The highlight of the trip was sharing the video conference room with the engineers and scientists at NASA, going over their results obtained from the rover, ‘Opportunity,’ currently exploring Mars. We also got to see how they plan out their mission and how they give the rover commands of what to do for the next few days. Although most of us did not fully understand the technical terminology and the ‘space language,’ it was an eye-opening experience getting to see how the job was being done.”

Ngo, who plans on transferring to Portland State University to get her bachelor’s degree in math, was selected based on her completion of a web-based assignment and essay during the school year. Once at the workshop, she had to complete a summary of mission goals and objectives, timeline and budget, and a line drawing of the rover and its mission to Mars.

“We were also given opportunity to interact with NASA engineers online through a chat session to help us with the online lessons,” Ngo said. “When we first got there we were divided into four different teams to work on a fictitious rover project. A NASA engineer, who gave us advice, accompanied each team. This made the project more realistic.

“The rover from my team was designed to go over various terrains and obstacles on Mars to obtain Martian rocks and soil to test for any sign of life on the red planet,” she added. “We worked from early in the morning until late at night. I had very little idea about Mars and rovers. Now, I know more about Mars than any other planets, except for Earth.”

The program is based on Texas’ Aerospace Scholars and was originally created in partnership with NASA and the Lone Star state’s educational community. It’s designed to encourage the community and junior college students to enter careers in science and engineering and ultimately join the nation’s highly technical workforce. The goal is to continue the space agency’s investment in educational programs that attract and retain students in STEM disciplines critical to NASA’s future missions.

“This innovative experience allows students to take what they’ve learned in the classroom and apply it to technical questions in the real world, simulating what NASA engineers and scientists do every day,” said Leland Melvin, NASA associate administrator for education. “It will help them develop the skills they need to be the problem solving explorers of tomorrow.”