This content was published: May 20, 2011. Phone numbers, email addresses, and other information may have changed. 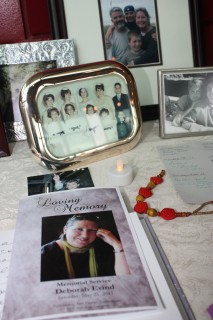 A memorial for Deborah Evind, in the lobby of the Performing Arts Center, Saturday, May 21.

Scores of friends and family members attended a memorial service on Saturday, May 21, for Deborah Evind, founder and long-time coordinator of the PCC Sylvania Women’s Resource Center.

Evind died May 3 in the presence of her family after battling a long illness. She founded Sylvania’s Women’s Resource Center in 1995 and, due to the illness, retired in 2010.

The service took place in the Performing Arts Center, Sylvania Campus. Speakers included Claire Oliveros and Dave Stout of PCC, along with members of her family.

Evind’s family requests that remembrances be in the form of donations to The Deborah Evind Women’s Leadership Scholarship. 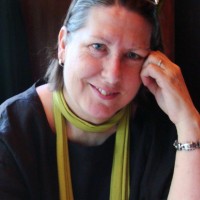 Evind first came to work at PCC in 1990 as an instructor in Steps to Success, an anti-poverty program that assisted low-income women to become economically self-sufficient. A major focus of her work for more than 30 years was the movement to end violence against women and children.

In addition to coordinating the Women’s Resource Center, she created and supported Sylvania’s Illumination Project, a nationally recognized student leadership and education program, and Sylvania’s Transitions Program.  For ten years, she produced “The Vagina Monologues” which raised more than $100,000 for local non-profits and the WRC to address domestic and sexual violence.

Before her death, she established the Deborah Evind Women’s Leadership Award Scholarship, which aims to carry on her goal of expanding access and opportunities for low-income women.

“The Deborah Evind Women’s Leadership Scholarship at the PCC Foundation will forever honor her legacy and life-long commitment to empowering women of all backgrounds to pursue their dreams and fulfill life goals,” said Kristin Watkins, Associate Vice President of College Advancement. “This past spring Deborah enthusiastically led volunteers in planning and hosting a wonderful gala that raised funds to endow the scholarship in her name. We will always remember and celebrate Deborah through her scholarship and through the students who will receive these scholarship awards for generations to come.”

To read more about the life of Deborah Evind, visit our web feature.