This content was published: April 19, 2011. Phone numbers, email addresses, and other information may have changed.

An art exhibit exposing the dangers of plastics pollution in the world’s oceans is coming to Portland Community College’s Sylvania Campus.

“Washed Ashore,” is a community effort to build giant sculptures of sea creatures most threatened by discarded plastics in the ocean. Sponsored by the Artula Institute, hundreds of volunteers and school children have helped create these sculptures, including a sea turtle, giant fish, jellyfish, coral, squid and even a whale skeleton. 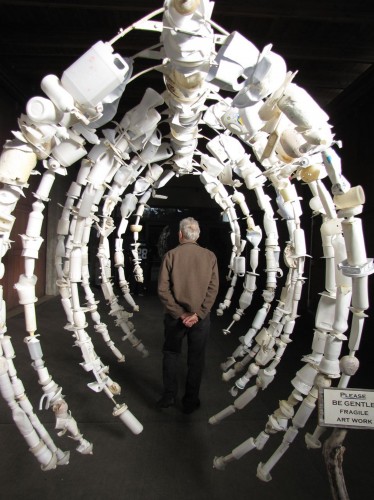 'Washed Ashore' is made up of pieces constructed from plastics garbage collected from the Oregon coast.

The exhibit will be open to the public from 3 to 7 p.m., Tuesday through Thursday, and 10 a.m. to 4 p.m., Friday and Saturday, April 20 through June 10 at the Sylvania Campus, 12000 S.W. 49th Ave. The large-scale pieces will be outside near the campus’ Performing Arts Center. Organizers will welcome field trips from area schools on Fridays during the exhibit.

In addition to the sculpture show, there will be a grand opening celebration of the exhibit from noon to 4 p.m., Wednesday, April 20, in the campus’ Upper Mall, College Center Building. A gala benefit to support the Artula Institute will be held from 7 to 10 p.m., Friday, May 20, Performing Arts Center, Sylvania Campus. The event will include live music, food and a silent auction. The public is invited to attend. To RSVP, visit the webpage: www.pcc.edu/about/sustainability.

All of the plastic that make up the pieces have been picked up from Oregon beaches. Community members of all ages have been working together to gather the beach plastics and construct giant sculptures of the marine animals most affected by the plastic pollution. Since the inception of the project, thousands of pounds of plastic pollution have been processed into art supplies by the “Washed Ashore” effort.

“Pelicans eat lids and lighters and are dying of starvation,” said the project’s director and lead artist Angela Haseltine Pozzi of Bandon. “Fish eat plastic pieces and are getting poisoned. Sea turtles devour plastic bags thinking they are jellyfish. Seals are being choked by plastic rings. Our beaches are being littered by garbage.”

In conjunction with the college’s Art Beat Festival, Pozzi will talk about her artwork from 3 to 5 p.m., Monday, May 9, Performing Arts Center, Sylvania Campus.

Pozzi said she wants to call attention to the voluminous presence of plastics in the marine environment as one of the biggest threats to the survival of life in the ocean. In some places small bits of plastic outweigh plankton by six to one, she reports, and estimates that entanglement kills 50,000 to 90,000 fur seals alone.

Pozzi holds a master’s degree in Arts Education from Portland State University and a bachelor’s degree in Education from the University of Utah. For 30 years she has been an active arts educator, spanning all age and ability levels, as well as an exhibiting artist, with work centered on the ocean. She won best of show in Byron Bay, Australia, in 2007 for her sculptures in the “Marine Visions” exhibition. In 2008 she completed another large-scale work called the “Bioluminescent Sea Cave,” part of a touring exhibit titled “Undermined Species,” that received acclaimed reviews, teaching people about the inner-ocean environment. 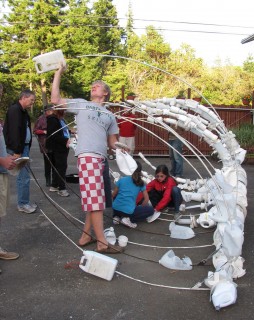 School kids and the community help the artist construct the large-scale works of art.

“The ‘Washed Ashore’ project has taken my artwork in a new direction,” Pozzi said. “I have always used various types of discarded and recycled materials, as well as new materials, to represent the strange and undiscovered creatures that dwell in the underwater world. Now, I have challenged myself to buy nothing except wire and metal framework materials, gathering every other bit of material I use from local beaches – my sculptures are now 98 percent discarded plastic. This way of working is the biggest creative challenge of my life.”

The art exhibit is currently at the Oregon Coast Aquarium and is headed to the Marine Mammal Center in Sausalito after its PCC showing.

“Portland Community College is committed to sustainability and we are proud to bring the Washed Ashore exhibit and this important environmental education opportunity to the Portland community,” said organizer Kim Smith, sociology instructor at PCC.