This content was published: April 29, 2011. Phone numbers, email addresses, and other information may have changed.

Meet PCC’s own music phenom, then listen to him play

In a little less than 10 years, Ian Guthrie went from listener to composer.  Now, it’s time for his spotlight. 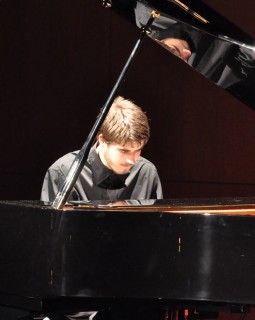 Ian Guthrie started on the piano in the second grade, two months shy of his 8th birthday and started taking private lessons a year later.

At 16 he entered Sylvania’s Music Transfer program and now at 18 his composition “Elegy” will be performed at 3 p.m., Sunday, May 1 at Portland State University’s Lincoln Hall by an ensemble of professional musicians in the Fear No Music Concert Series. Guthrie and his compositions will be featured in PCC’s Spring Term Music Recitals at noon and 6:30 p.m., Tuesday, May 17 through Thursday, May 19 at the Performing Arts Center at Sylvania Campus.  Guthrie will perform a piano sonata at noon, Thursday, May 19 in the PAC.

The Fear No Music Project is an ensemble of musicians who promote the development and education of local young composers.

Guthrie started on the piano in the second grade, two months shy of his 8th birthday and started taking private lessons a year later.  The first piece he performed was a one-page arrangement and at 9 years old he composed his first piano concerto. While at PCC his composition skills have developed to include interests in Caribbean music and stylings, chromatism and Jazz. He said the Music Program classes provided him with an understanding his compositions on a technical level.

“John Mery (Department Chair for Music and Dance and Sylvania Campus) allowed me to learn theory starting at 16 instead of the customary 18 at most other universities and schools,” Guthrie said. “I’ve learned why tonal music and atonal music works because the analysis shows the relationship of the music, so the theory classes here at PCC have explained why and how my own compositions make sense in the musical context.”

Guthrie is currently working on composing a symphony as well as developing his own music business. He has a strong interest to eventually compose film scores and concert music.  To further his studies, he plans to transfer in Fall 2012 to either Texas Christian University or Marylhurst University for a Bachelors in Music moving on from there to a Masters at Julliard where he hopes to study under film score composer John Corigliano (“The Red Violin”).