This content was published: January 6, 2011. Phone numbers, email addresses, and other information may have changed.

Rich history for one of Portland’s own festivals

It is one of the city’s gems. Born from an idea and blossomed from hard work, the Cascade Festival of African Films has become one of Portland’s best kept secrets.

It has hosted a multitude of African directors and enjoyed a surprise visit by film actor Danny Glover. It has attracted more than 54,000 film enthusiasts and has shown 272 films – 208 of which are housed in a special collection at the PCC Library. The second 20 years of the Cascade Festival of African Films begins Feb. 4 – five weeks of screenings, discussions and fun. 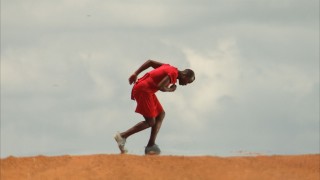 A scene from last year’s film “Nora.” The Cascade Festival of African Films typically shows between 25 and 30 films a year.

It all started in the spring of 1990, when Cascade Alternative Learning Center employee Linda Elegant approached literature instructor Mary Holmström, a native South African, about what she thought about starting an African film festival. Holmström had started teaching African literature at Cascade in the spring of 1989 and was looking for African films to complement the novels and plays she was teaching.

“Since I realized that my students had western images in their heads instead of realistic pictures of Africa, I responded to Linda’s question with an enthusiastic ‘yes’,” Holmström said.

Buoyed by her response, Elegant then set about recruiting English instructor and current District 45 State Representative Michael Dembrow, who taught a course titled “Film as Literature,” and Joseph Smith-Buani, who was from Sierra Leone and was a math tutor in the alternative learning center.

“It was only after Linda invited Michael to join us that she learned he had met and interviewed director Ousmane Sembene as a graduate student,” Holmström recalled. “It was pure serendipity!”

Dembrow recommended opening the festival with Sembene’s new film, “The Camp at Thiaroye,” which was shown at the festival sight unseen beforehand as it was only available from New Yorker Films in 16mm format. Holmström recommended the other three films – “Yeelen,” “La Vie Est Belle” and “Faces of Women.”

“’Faces of Women’ had been shown at the Clinton Street Theatre earlier in the year, but I had missed seeing it,” she said. “I found the distributor and it became part of the first festival’s film program.”

Elegant became festival coordinator while Smith-Buani was the evening host and Dembrow wrote the film notes. Holmström did the film programming with help from Dembrow from time to time.

“Ronna and Baba Wagué became the first community members to join the CFAF Committee (in the late 1990s),” Holmström recalled. “And the rest is history, as they say.”

Number of hours of volunteer time dedicated to the festival: 30,000 hours (estimated)