This content was published: May 13, 2010. Phone numbers, email addresses, and other information may have changed.

Dieterich Steinmetz, interim division dean of Sylvania Science and Engineering, has been elected to the position of president of the Oregon Academy of Science. His term is for one year.

The academy promotes scientific research and education within the state. Divisions of the academy represent all areas of the natural sciences and social sciences, and the association encourages participation by research and applied scientists and educators from all fields. 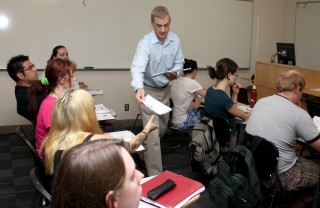 Dieterich Steinmetz in one of his classes at Sylvania.

Discipline sections work to encourage communication among Oregon scientists through the annual OAS meeting which acknowledges contributions by outstanding university and K-12 educators demonstrating dedication to the advancement of science education. Additionally, each year the academy acknowledges an Oregon scientist who has made outstanding contributions in his or her field of specialty.

Prior to serving as Sylvania’s interim division dean, Steinmetz was the department chair for the Life Sciences at the campus beginning in 2005. He first joined the college in 1997 as a part-time instructor, leading laboratories in anatomy and physiology, before becoming full-time in 2002. Steinmetz earned his medical degree from Oregon Health & Science University in 2001.