This content was published: December 14, 2009. Phone numbers, email addresses, and other information may have changed.

If you were at the Cascade Campus on the first day of fall classes the sight was unavoidable – bike racks, jam packed with, well, bicycles. 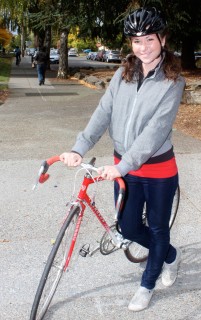 And the racks have been jammed every day since. Krystyna Solodenko is a student at the Cascade Campus (705 N. Killingsworth St.) who rides to school and has been a participant in these daily jams.

“It was terrible finding a spot,” she said. “I had to use a tree to lock my bike. I have never seen so many bikes on campus. It made me pretty happy at the same time. It was awesome.”

Solodenko, who recently immigrated to the United States from Ukraine, just got her citizenship in the summer and is a student government outreach coordinator. The psychology major said that riding bikes is more normal back home in Ukraine than driving a car so it was second nature for her here to cycle to class.

“And it’s a lot faster than taking the bus,” she said.

Cascade is by far the most bike-oriented campus because of its inner Northeast location and proximity to TriMet bus and Max line routes. According to a PCC parking and transportation survey, 10 percent of students at the campus bike to class and 7 percent of staff and faculty bike. Overall, across the entire district, 3 percent of students and staff bike to PCC locations.

The crush of bikers has been so overwhelming that the Cascade Campus installed a line of new bike racks between Terrell Hall and the Student Services Building. The new rack has increased the bike-parking capacity by 40 bicycles and alleviates the shortage of spaces.

And if it isn’t biking it’s the PCC Shuttle. According to fall term, year-over-year numbers, ridership has grown by 21 percent. The Rock Creek Campus (17705 N.W. Springville Road) has surged the most – 48 percent. 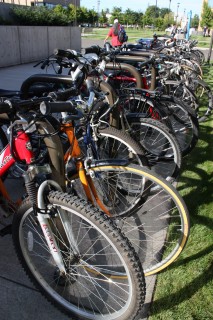 The first day of classes for fall term featured overwhelming use of the bike racks at the Cascade Campus.

At the Sylvania Campus (12000 S.W. 49th Ave.), staff and faculty enter biking competitions in Portland to bond, have some fun and spread the word about commuting on a bike. Kirke Johnson, a Technology Solutions Services specialist, is the captain of the Sylvania Campus team that participated in the Bicycle Commute Challenge, a friendly competition – workplace against workplace – organized by the Bicycle Transportation Alliance.

“Bicycles are becoming a realistic, sustainable transportation alternative for many people,” said Johnson. “And regarding the Challenge, it’s just great to see PCC joining other organizations that have helped to make Portland a platinum-level cycling community.”

Cascade Campus Community Relations Manager Abe Proctor uses his bike and the shuttle for his transportation needs. Like Solodenko, Proctor has watched the number of bikers coming onto campus increase.

“I get here pretty early on most days, so I can usually find a place to lock up my bike,” said Proctor, who has been a regular bike commuter for nearly three years. “But the spaces fill up really fast. It seems like more and more people are biking to Cascade all the time, so the extra rack space is really helpful.”

Proctor said he appreciates bike commuting for a number of reasons, not the least of which is the amount of money he saves.

“When you burn zero gasoline during the week, it really adds up,” he said. “If you’re driving your car less, your monthly insurance bill decreases as well. And it’s much cheaper than a gym membership. I arrive at campus alert, focused and ready to work.”