This content was published: November 16, 2009. Phone numbers, email addresses, and other information may have changed.

If history instructor Terri Barnes could go anywhere in time, she said she’d “go back to Tudor England, meet Henry VIII, slap him, and ask what he was thinking.” Before such a fateful meeting of course she’d make sure that her ride back to 2009 was viable.

The time travel question is one she throws out to her western civilization class at the Rock Creek Campus every term. But in the absence of a real time machine, Barnes immerses her students in the tastes, smells and sounds of ancient Egypt and Greece, medieval Europe and more. 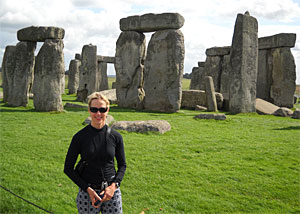 Barnes, who has a master’s degree in history from Portland State University, has taught for six years at the college. During that time, she has taken her classes on museum trips, staged a mock peasant revolt and conducted catapult demonstrations with a trebuchet (to examine, among other things, early biological warfare in which the severed heads of diseased corpses were flung over castle walls by enemy invaders).

Inspired students have also set up a medieval herb garden in the Rock Creek Learning Garden (lavender, rosemary, thyme, lemon balm, oregano, which had medical, culinary, and aromatic uses back in the middle ages). She has brought in Greek food while studying the ancient Greeks and encouraged her students to wear togas while studying the Romans. And, to no one’s surprise, her classes always have a long wait list.

“I want my students to think about history with all of their senses, to ask what it smells like, what kind of clothing would you be wearing and how would it feel on your body?” Barnes said. “My students are fascinated with how people actually lived. Sure there were big political and economic events such as wars, but what did they eat? What was daily life like? I try to make it fun for the students.”

Her division dean of Social Sciences, Karen Sanders, praises Barnes’ unique teaching methods. In observing Barnes’ classes, she has watched students working in groups to decipher original pieces of old English writing and to figure out the era and origin of an art piece from one of the cultures they’d studied.

“The students were really into it,” Sanders said. “She was testing them and they didn’t even know they were being tested. It was very effective.”

Barnes said she has heard it said that history never repeats itself, rather it echoes. That concept in particular resonates with her and she finds herself heartened by a movement she sees among history teachers. This brings her to a point that she uses with her students, one she hopes will illustrate the importance of history.

“Some poor schmuck sitting in a Western Civ. class 500 years from now is going to read about you and the world you created for them,” she said. “You’ll be the history they’re reading about. Maybe they’ll scorn you or maybe they’ll praise you, but you certainly don’t want them to see you as this dead, irrelevant thing in the past.”

Planning a College, History in the Making, RC Kicking Off 40th Celebrations