This content was published: May 22, 2009. Phone numbers, email addresses, and other information may have changed.

Family, friends, faculty and staff will be on hand to congratulate the graduates and celebrate their accomplishments as they take center stage with PCC District President Preston Pulliams, the board of directors and executive staff. This year’s ceremony will include emcee Linda Gerber (Sylvania Campus president), Board Chair Denise Frisbee, student speaker Tiara Jones and faculty speaker James Harrison, history instructor.

Jones, 28, who earned her associate’s degree in general studies and will transfer to Oregon State University to pursue a bachelor’s in liberal studies, plans to aim her message at unconventional students. It’s timely as more nontraditional students turn to PCC for their education. For example, the number of full-time equivalent students 50 or older taking career and professional technical courses at PCC has increased by 18.9 percent since 2005-06. And the overall FTE enrollment for all students has surged by 19 percent this spring compared to spring term 2008 as more and more students go back to community college to retrain or take advantage of its low cost during this tough economic time. 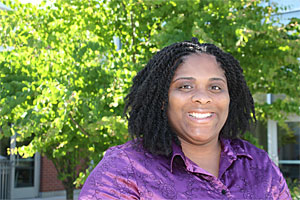 “I want to gear my speech towards the different types of students, not just that one with straight A’s or just out of high school,” Jones said. “I want to talk to that older adult, the single parent or that mom or dad that is working full time with a full class load or the student that is the first to go to college in their family. You can succeed no matter how long it takes.”

Jones, who works full time as a medical assistant at a Providence surgery clinic, wants to pursue a job in healthcare administration. When she completed high school, Jones was already a teen mother. Added to this challenge, she was struggling with caring for her mother who suffered from multiple sclerosis. Jones also was going through domestic violence at that time; however, Jones decided she needed an education if she was going to survive and started to take classes at PCC – some at night, some on the weekend, some online, but bit-by-bit she was determined to get that degree.

“It’s been a struggle,” Jones said. “It’s been 10 years for me to get my degree. For most people that’s a long time, but through raising a family while maintaining a full time job and juggling a load of other responsibilities this extended my educational pursuit for me.”

That’s why Tiara screamed when she got that phone call from PCC’s graduation committee telling her she had been selected to be the student speaker. The announcement was a symbolic tipping of the cap to her perseverance.

“I was in total awe,” she said. “I asked them, ‘You are calling for me?’ It was a surprise. When I started school I always felt down and unsuccessful. I was this teen mom who wasn’t expected to achieve things. It was really a confirmation that no matter what my situation was I could be the graduation speaker if I put my mind to it. I can’t even describe how it felt getting that call.”

The 2009 student speaker said going to college at PCC was made easier because of PCC’s large district – the size of Rhode Island – with more than 200 locations. She has taken classes at the Sylvania and Rock Creek campuses as well as the Southeast Center. With four kids and a family to provide for on top of work and school, it made all the difference.

“I’ve been all over,” Jones said. “Wherever I could take a class, wherever it would work, that’s where you found me. Plus, the classes are flexible with more than one location all over Portland. You don’t have to be at one campus. There are large evening classes, weekend classes and they have really good instructors. It’s good to go to a community college because you have the same instructors that teach at a university, but you are paying a fraction of what it costs there.”

However, she would not have gotten through those particularly rough days or nights if it hadn’t been for her instructors and the staff at PCC.

“I have had some great instructors that have been supportive,” she said. “Rudy Morrow, my speech teacher, was awesome. He was very supportive, energetic and I really learned public speaking. Those nights after work I would come into his classroom really tired and exhausted, but I could really plug into him because he really cared.”

Jones has remarried to a “wonderful husband that supports me finishing school,” and now has four children, and a great support system.

“I am happy that my father will be there, as well as, my sister from Arizona along with my family and friends, who are super excited for me,” she said. “I have this huge support system that will be there to cheer me on because they know how hard it’s been; it has been a struggle.”

Based at PCC’s Cascade Campus, history instructor James Harrison is known for his off-the-beaten-path approach to history, especially concerning African-Americans. During the month of February for Black History Month, Harrison e-mails the community with short passages on unknown historical figures, events or little-understood twists and turns. 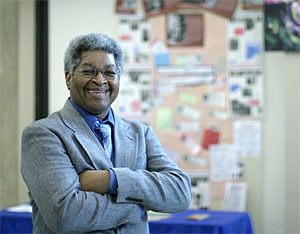 Harrison’s own history is similarly fascinating. He was born in South Carolina and moved with his mother and brother to Harlem when he was seven. He said that they were part of the great migration of African-Americans from the South that populated large sections of the industrial North. A decade of living in New York City opened him up to America as a multicultural society and his mind to a wider world. Harrison graduated from Hunter College in 1967 and volunteered for the Peace Corps where he was stationed in Sierra Leone, West Africa, for two years. Harrison taught and counseled in New York colleges and schools for many years following his return from Africa.

After he became established there, Harrison wanted to move on and see the country so he took a road trip that eventually landed him in Portland. Once here he taught social sciences at three Portland Public Schools for 18 years and even served as the principal of a Catholic grade school. But in 1993, Harrison was hired as a history instructor at the North Portland Campus of PCC where he has become a well-known and respected authority on local African-American history.

“It’s the students,” Harrison said of why teaching is so addictive. “The main thing is that they want to learn something and will ask questions. When they do that they discover a lot of things that were told them in school were only half the story. I want to open their minds. My goal is to have them think critically and think of what they can do to make the world a better place.”