This content was published: May 27, 2008. Phone numbers, email addresses, and other information may have changed. 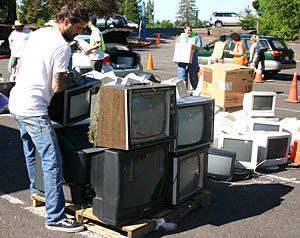 Hosting its first ever e-Cycling drive, the campus joined forces with Bear e-Cycling and GreenWall Industries to take in old, unwanted electronics. Staff and students triaged donations on-site, sorting equipment parts and accessories before they were responsibly recycled.

“We arrived early for set up, so we’d be ready for our open at 9 a.m. – and we had customers lined up at 8 a.m.,” said Diane Shingledecker, interim department chair for the Computer Applications/Office Systems division and PCC’s lead organizer of the event. She said more than 200 cars – and 800 donations – came through until 2 p.m.

Forty-five computer technology and marketing students joined 12 faculty and staff to plan the event months in advance, working on marketing and public relations efforts as part of class projects. On-site, the team helped sort materials and conduct market research regarding incoming donations and ways that donors had learned of the event.

“I talked with drivers waiting to unload their appliances, and many were very appreciative that PCC provided a place to donate their unwanted electronics,” said Linda Ness, a student in the CAS 133 computer class. “It was amazing to see the accumulation and how it was handled, packaged and loaded.”

Aside from large appliances and fluorescent light bulbs, all electronics were accepted free of charge. A cap was set on the number of computer monitors and television sets that could be accepted for free as they’re more expensive to recycle. Bear e-Cycling confirmed that 180 monitors, 92 TVs, 83 computers and hundreds of additional items were recycled – or three truckloads weighing in at 17,824 lbs./8.912 tons.

“We are so proud of our staff and students who volunteered with this event, as their efforts raise awareness about the volume of e-waste going into landfills,” said Linda Gerber, Sylvania campus president. “Based on the turnout, we hope to make this an annual event.”

Gamers Score High on Fundraiser, Q&A with Lisa Avery, Sylvania gets a lift