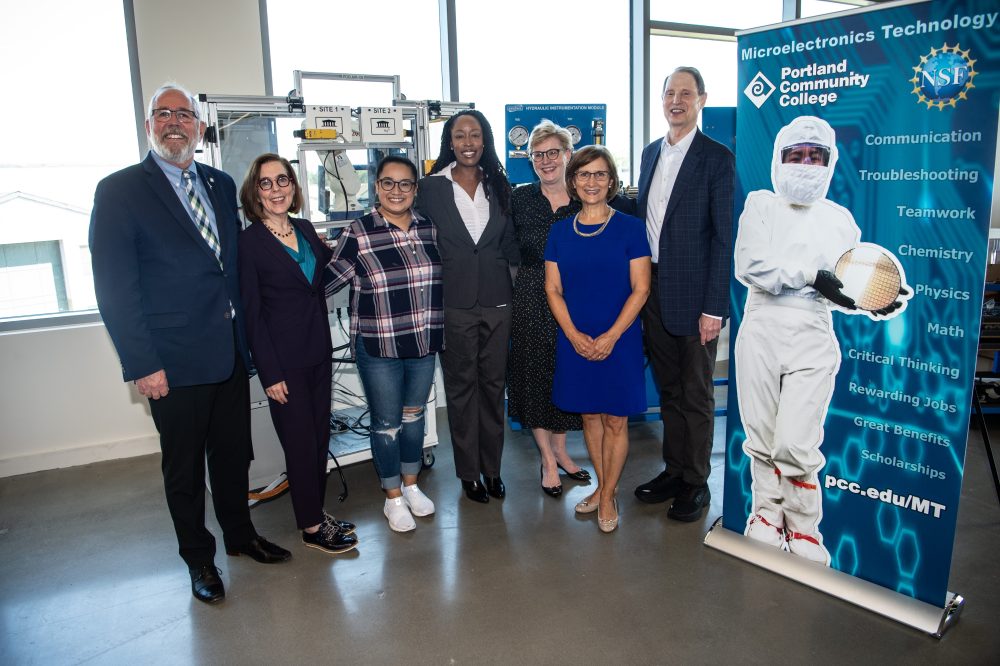 Portland Community College was the scene of a statewide press conference announcing the release of a report that will impact the future of Oregon’s semiconductor industry.

Since March, the task force has analyzed the state’s semiconductor industry and how it can continue to thrive, grow, and create prosperity and opportunity. It centered on key factors that impact semiconductor manufacturing, Oregon’s competitiveness in those areas, and options to position the state to attract industry investment. 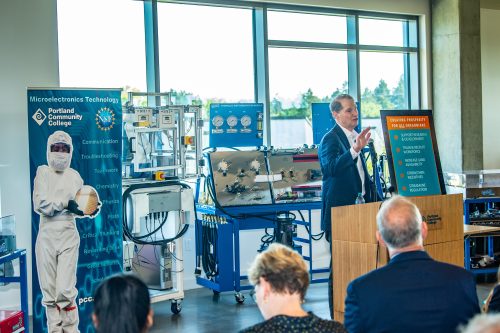 “The work of the task force is a jumpstart to a unique opportunity,” Dr. Bennings said. “Our work provides insight into industry impact, advanced manufacturing needs, and educational and workforce dynamics. Overall, the recommendations are intended to advance collaborative efforts across the state to solidify our position as a global leader in the semiconductor industry and create a sustainable future workforce.”

As a leader in US semiconductor research, design, and production, Oregon has an opportunity to create the jobs and investments the state needs to manufacture a stronger, more equitable economy. Revenues from the industry can broadly impact people across the state, including support for critical community priorities such as homelessness, affordable housing and education.

In July of 2022, Congress passed the $52 billion CHIPS and Science Act. This funding creates a chance to greatly expand domestic semiconductor manufacturing and design, securing Oregon’s leadership in the global market.

“What is being done today is that we’re releasing a battle plan to build an even stronger chip industry that continues generating jobs here in the Silicon Forest and across the state,” said Sen. Wyden. “The major center of chip research and development is Washington County. This is the major center of chip research, and the fabs that are being built in America depend on what is going on in Oregon.”

Student Emily Mom is an example of the success of Silicon Forest and how PCC is key to the future of semiconductor training in Oregon. The part-time PCC Microelectronics Technology Program student is currently working full-time as a manufacturing technician for Intel. Born in Cambodia and immigrated to Oregon in 2008 when she was 12, Mom will be the first in her family to graduate from college. 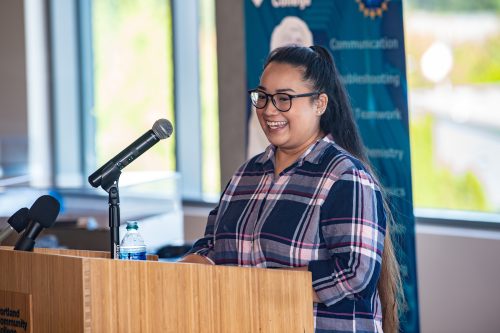 “Everyone that I have met during my time here at PCC and in the MT program has been so helpful and so supportive, even my classmates,” said Mom, who is taking advantage of the tuition assistance program that Intel provides for their employees to continue their education. “We all are eager to learn and when we get to work as a class to troubleshoot an issue, it gives us an opportunity to learn from each other as well.”

PCC’s Microelectronics Technology Program, which enjoys a nearly 100% job placement rate of its graduates, has earned a reputation for excellence. In contrast to similar programs, it is specifically designed to meet the needs of the industry. PCC enjoys a strong partnership with local semiconductor manufacturers like Intel and offers National Science Foundation STEM scholarships to women and students from diverse ethnic backgrounds to help diversify the pool of workers.