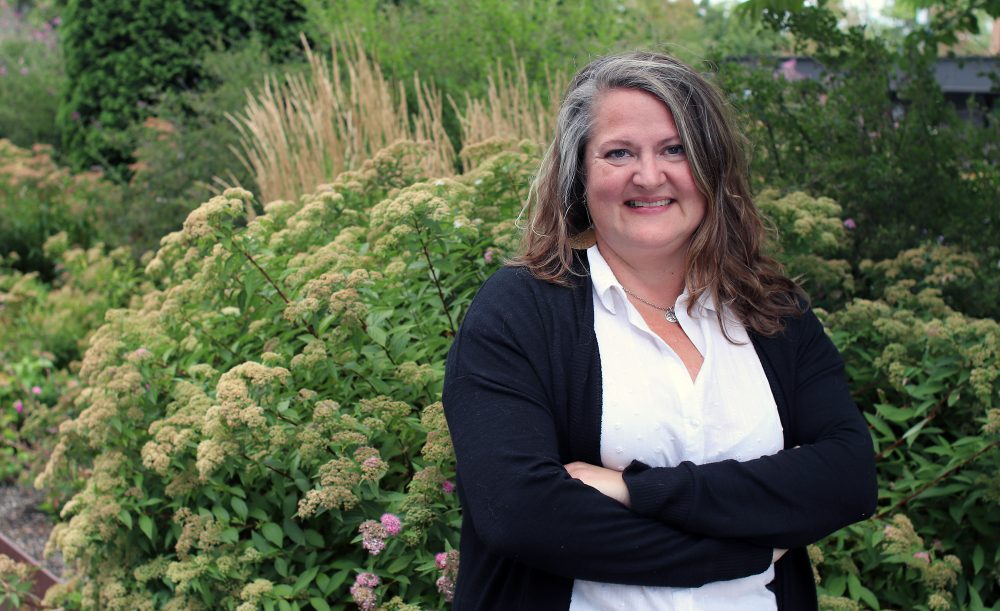 Sarah Mooney is stationed at the Columbia River Correctional Institution where she is PCC’s Adult Basic Education (ABE)/GED computer lab and tutoring coordinator.

The bad news is that she couldn’t return to her Department of Corrections (DOC) job due to the COVID-19 pandemic. The good news, though, was that she was being honored with the statewide Correctional Services Contractor of the Year Award for 2019. Due to the closure of her offices soon after, Mooney couldn’t be bestowed with the hardware until this past summer.

“Sarah Mooney changes the trajectory of their lives,” said James Hanley, the Corrections Rehabilitation Manager at Columbia River. “Sarah believes in all her students even when they don’t believe in themselves. She builds them up and brings them to a place where they know they’ll succeed and they do.”

Columbia River is a releasing facility where the adults in custody she works with are there for as little as two months to sometimes as much as three years. The students Mooney instructs have education plans that are unique, and guiding them to success is what makes her work enjoyable. 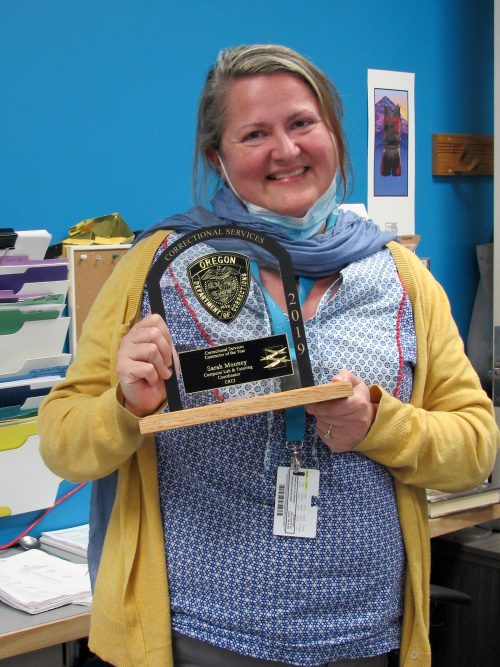 This summer, Mooney finally got her hands on the Correctional Services Contractor of the Year Award, first announced back in 2019.

“I was really surprised and humbled to receive this award,” said Mooney, who has a bachelor’s degree in Literature and Art from the University of Portland. “My favorite thing is to see students all hit the ‘aha’ moment. It varies with small incremental successes to the ‘holy crap I passed that final math test.’ There are not a lot of things to celebrate in prison, but this is definitely one of them, and I love being part of it.

“The work people are doing for the adults in custody population is significant and to be noticed among my peers for a job I absolutely love tells me I am where I am supposed to be,” she added.

Mooney has a history rooted in serving the community, spending her summers volunteering with First Nations people in Colville, Wash., and working on a migrant farm in Hillsboro.

She also has explored the world’s culinary scene. Before PCC and after a stint working as the web developer for the Multnomah County Sheriff’s Office, the Olympia native moved to Italy to earn a master’s degree in Food Sustainability and Ethno-Botany from the University of Gastronomic Sciences in Pollenzo. Afterward, Mooney used those skills to work in Portland’s culinary scene as a cheesemaker, monger and business owner educating foodies about cheesemaking, tasting and the cheese industry.

“I love my cheese world work for its creativity, but I also wanted some stability and a way to empower people in my community who are often overlooked,” Mooney said. “I enjoy working in a corrections environment, and I knew this was the work I was supposed to be doing.”

Mooney is part of PCC’s Adult Basic Education Program, which operates at the Columbia River Correctional Institution and within the Coffee Creek Correctional Facility. PCC uses a blended learning model, consisting of Adult Basic Education and GED instruction, computer lab, peer tutoring and fast-track classes to help those in custody build skills to make their transition out of the facility a better one.

“They show me photos of their kids and moms,” Mooney said of the students. “They tell me stories about how they were raised and their toughest and proudest moments. When I bring my students into education, I want them to feel like they have a safe place to learn. I want them to know that they are now students of PCC and to graduate from PCC with their GED is a big deal.”

Karen Mooney helped me get my GED at Columbia River and I am now just finishing up my last class to achieve my associates degree as a Certified Alcohol and Drug Counselor….well deserved award!

x by Doreen Hanna 9 months ago

Many, Many kudos to you for you dedication and love of your work! What a wonderful story ~ THANK YOU for the work you do!

x by Joshua Davis 8 months ago

As an ABE/GED graduate myself I really appreciate this. I wouldn’t have felt comfortable coming back to education if it weren’t for the kindness of my teachers. Thank you for what you do!

x by Sarah Mooney 8 months ago

Mr Lyman!! It is so awesome to see your name here. Congratulations to you! I could not be more proud of your hard work and successes! God luck in all your future efforts. You will be a wonderful counselor.