This content was published: September 26, 2019. Phone numbers, email addresses, and other information may have changed.

Monica Mayer ‘Translocal Translations’ catalogue to be unveiled at PCC

In 2018, Portland Community College and Portland State University hosted eminent feminist activist and artist Mónica Mayer. Mayer’s visit was the seventh in the Portland Women in Art Lecture Series (PWALS) and was additionally significant because it introduced Portland audiences to Mayer’s work, which had not been previously exhibited in the Pacific Northwest.

In honor of that visit, PWALS is presenting for the first time the catalogue “Mónica Mayer: Translocal Translations.” The catalogue will be released at a 6 p.m. ceremony on Friday, Oct. 4, in the Paragon Art Gallery, Cascade Campus (705 N. Killingsworth St.). Catalogues will be available at the event. The event is free and open to the public, and it coincides with the exhibition “BorderXer” by Patricia Vázquez Gómez. Refreshments will be served. 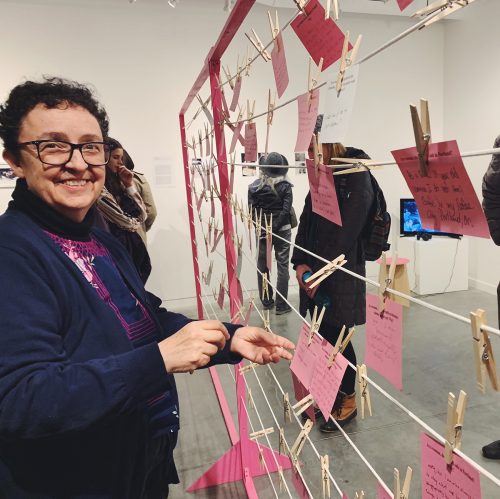 The catalogue documents all of the multi-campus activities surrounding Mayer’s 2018 Portland visit, including a retrospective of her work curated by Portland State University Professor Alberto McKelligan Hernández at the campus’ Paragon Art Gallery. The retrospective featured selections of Mayer’s work from the past four decades, including video, photography and ephemera archiving her performance art and social practice.

Mayer is known for pioneering feminist projects such as “El Tendedero” (“The Clothesline”), recreated repeatedly since its first iteration in Mexico City in 1978, and the catalogue documents the 2018 clotheslines set up at sites around Portland.

The catalogue is bilingual, featuring an essay by art historian and curator McKelligan Hernández. In the essay, McKelligan Hernández positions Mayer within the larger context of political activism and feminism in Mexico while also explaining how her work fits into the concept of translocality and resonates with work produced by early feminist artists in the United States. Her work has been shown internationally for decades, notably in historic survey exhibitions such as “WACK! Art and the Feminist Revolution” and “Radical Women: Latin American Art, 1960-1985.”

The Portland Women in Art Lecture Series was founded in 2010 with the goal of presenting important women in the visual arts to students and faculty as well as a larger Portland audience. Portland Community College, the Regional Arts and Culture Council and Portland State University are sponsoring this catalogue release.