This content was published: August 27, 2018. Phone numbers, email addresses, and other information may have changed. 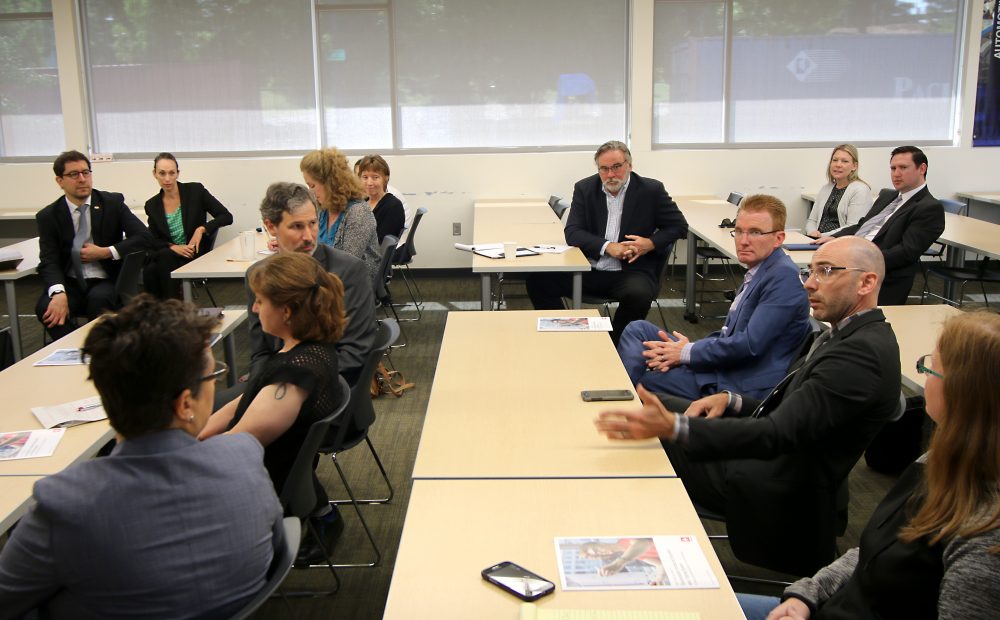 It was a stellar lineup of visitors for the event. The group included representatives from the Oregon Business Council, City of Portland, Greater Portland Inc, Portland Business Alliance and the Governor’s Office.

Time will tell if it comes to fruition, but the seed has been planted in the minds of many key local leaders after an informative presentation this month by Simon Marti, head of the Office of Science, Technology and Higher Education for the Embassy of Switzerland in Washington, D.C.

Portland Community College President Mark Mitsui invited Marti to present at the college’s Swan Island Trades Center in North Portland. The president kicked off the day by introducing Marti and leading a discussion about how the college and the state can more efficiently meet workforce needs. Since Switzerland is known for its efficient and successful apprenticeship model, many believe that it could be a good system for Oregon.

“While we are evolving workforce development training, we are looking at the spectrum of work-based learning opportunities, with apprenticeship being the gold standard at PCC,” Mitsui told the group, which included representatives from the Oregon Business Council, City of Portland, Greater Portland Inc, Portland Business Alliance and the Governor’s Office.

Marti said the success in the Swiss model depends on public-private partnerships. The private sector creates apprenticeship positions and training curriculum, while the government focuses on management and development of the system. The cantons, or Swiss states, provide career guidance, vocational schools and supervision. 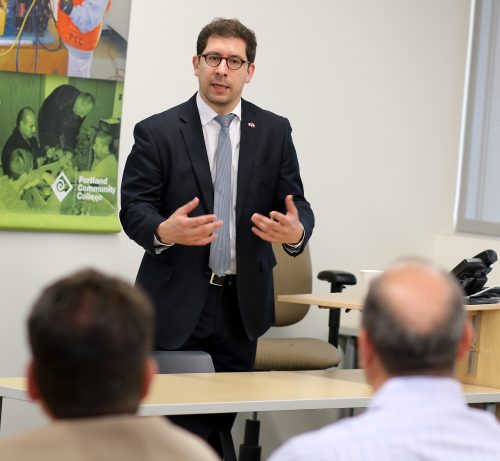 Marti said the private sector in Switzerland creates apprenticeship positions and training curriculum, while the government focuses on management and development of the system.

“The companies form professional associations which function as an intermediary,” Marti said. “They talk to the federal government and the cantons. While the government may not be on the ground and involved, it does serve more strategically by overseeing the system and getting involved only when there is a problem.”

The model is funded mainly by the participating companies, who cover the training costs and wages of the apprentices. There are 238 occupations that apprentices can choose from, leading to one or more two-year federal certificates, three- or four-year federal diplomas or vocational baccalaureates. Students perform two to four days a week of in-company training and industry courses, with the rest of their time being spent in the classroom at a vocational school.

Such a track produces highly educated, highly skilled graduates. The apprentices have job-ready skills that make them desirable to would-be employers, many of which are the participating companies. Currently, Marti estimates that throughout most of the industry fields the apprenticeship program touches, the unemployment rate hovers around three percent. He concluded that 90 percent of Swiss 25 year olds possess an upper secondary degree.

“While we have companies leave the apprenticeship sector, many others join,” Marti added. “It’s better for the students because they can choose from so many options.” 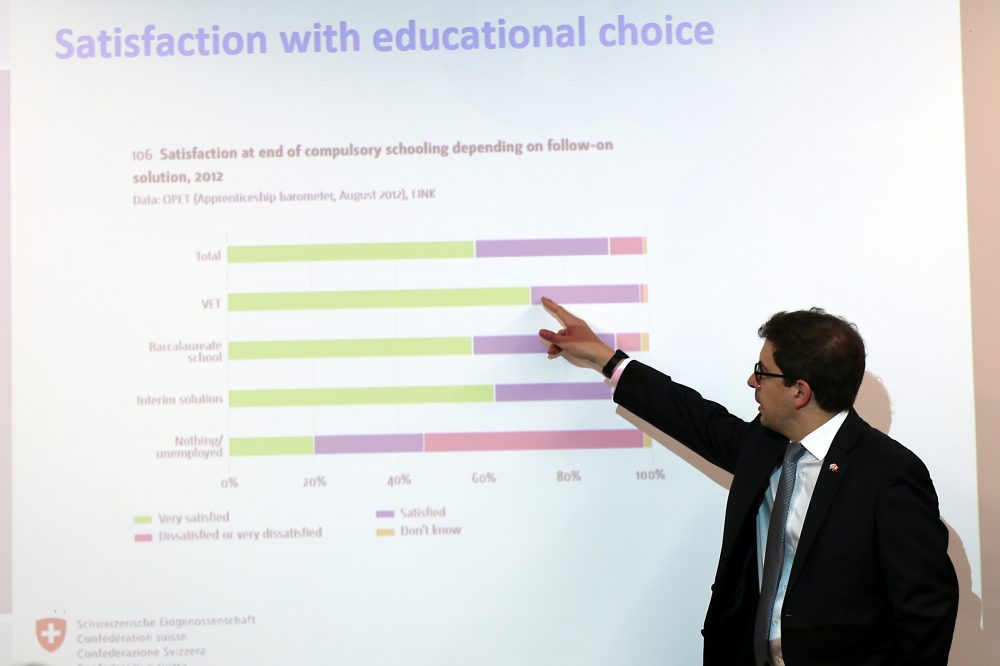 The satisfaction rates of Swiss apprentices is impressive.

The state seems ready for a proven model like Switzerland’s. Elana Pirtle-Guiney with Gov. Kate Brown’s office said apprenticeship training is a core part of Brown’s Future Ready Oregon. In the initiative, Brown wants to expand registered apprenticeship opportunities to fields like IT, healthcare, advanced wood manufacturing, and high-tech manufacturing.

“We have significant skills gap in Oregon right now,” Pirtle-Guiney said. “Future Ready Oregon is all about closing the gap between the skills Oregonians have and those that businesses need in the workplace. We are looking at apprenticeship as being a big piece of the work we are doing now.” 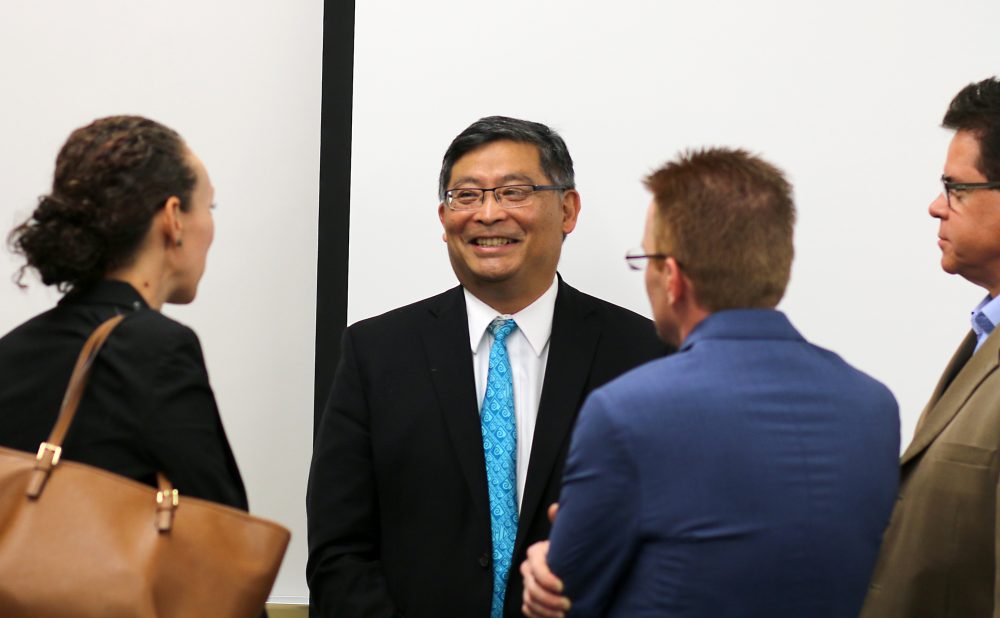 Mark Mitsui told the gathered partners that PCC is focused on CTE training.

Mitsui highlighted how the college and the state of Oregon are increasing CTE certificate completion and facilitating stronger wages locally. He said PCC has more than 1,600 employer partners that advise on curriculum, training practices and job skills to meet industry needs.

As part of the next biennium budget, Mitsui said the community college consortium is asking that $70 million of the $787 million proposed for the 2019-21 budget be used for career technical training. This would go a long way toward planting and growing an apprenticeship model in Oregon, he said.

“One of the things we are really focused on is partnering with our employers to create more opportunity for students,” said Mitsui. “We are leveraging those partnerships for students as much as we can, but we still are not able to completely bridge the skills gap (without additional state funding).” 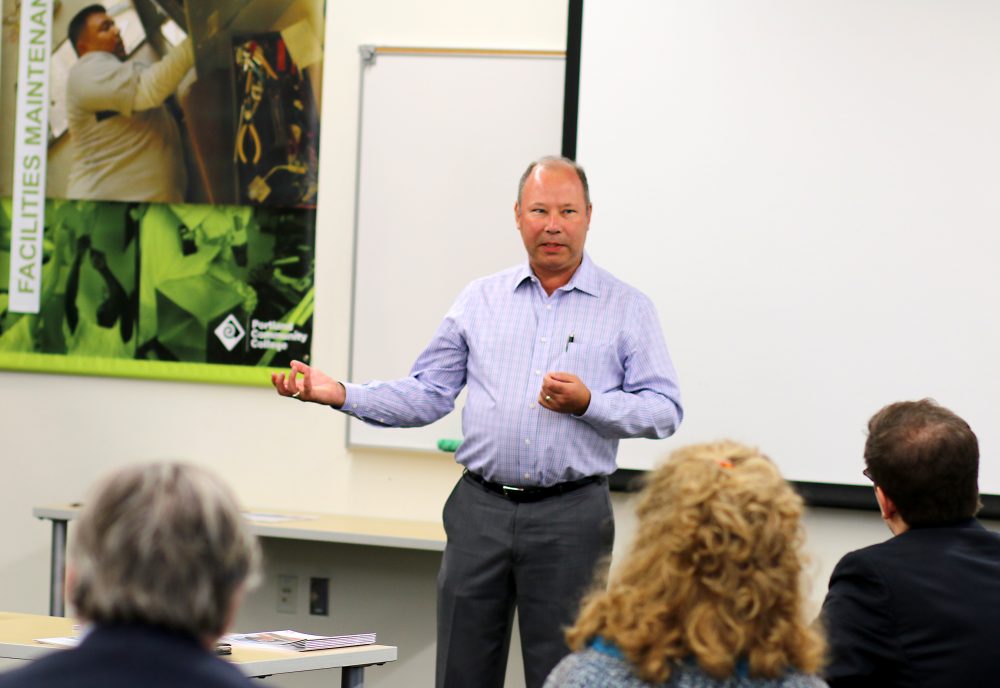 Ken Madden of Madden Industrial Craftsmen talked about the Madden apprenticeship model that he has established with PCC.

x by Tony Hernandez 3 years ago

This is a great idea and I like that PCC is willing to look at other business models that work around the world and try to implement them into Oregon’s current economy. I would like to see more of this type of innovative thinking. Some questions I wish the article addressed are: How does this program align with local unions? What are the wages for students that enter the a specific discipline? Do students get company benefits if accepted thru a participating company? How long does a student have to stay with the participating company after the apprenticeship program is complete?

Overall, I think this is a good start for providing people another option into entering the workforce. It would be interesting the see the business model proposal and compare the demographics and other urban matrixes against Switzerland’s demographics, cost of living, transportation, etc.

x by Cyrus Khemalaap 3 years ago

Workforce training, apprenticeships would definitely be an important part in PCC’s future. It’s worth noting that job mobility, retention, ‘headhunting’, furloughs, layoffs, and opportunism are tough realities in the US labor force that make it difficult to quantify the cost benefit of the Swiss model when it ends up having to enter the for-profit business consulting industry as a competitor. PCC may have to enter the conversation addressing unusually high turnover in the US workforce as a defendant, not an educator in a lecture hall. The concept of a 20-year career ladder with promotions, company loyalty, pension plans, perhaps even worker’s comp, have been institutionally wiped off the conscience of Millennials and emerging Gen-Z workforce.