This content was published: May 14, 2018. Phone numbers, email addresses, and other information may have changed. 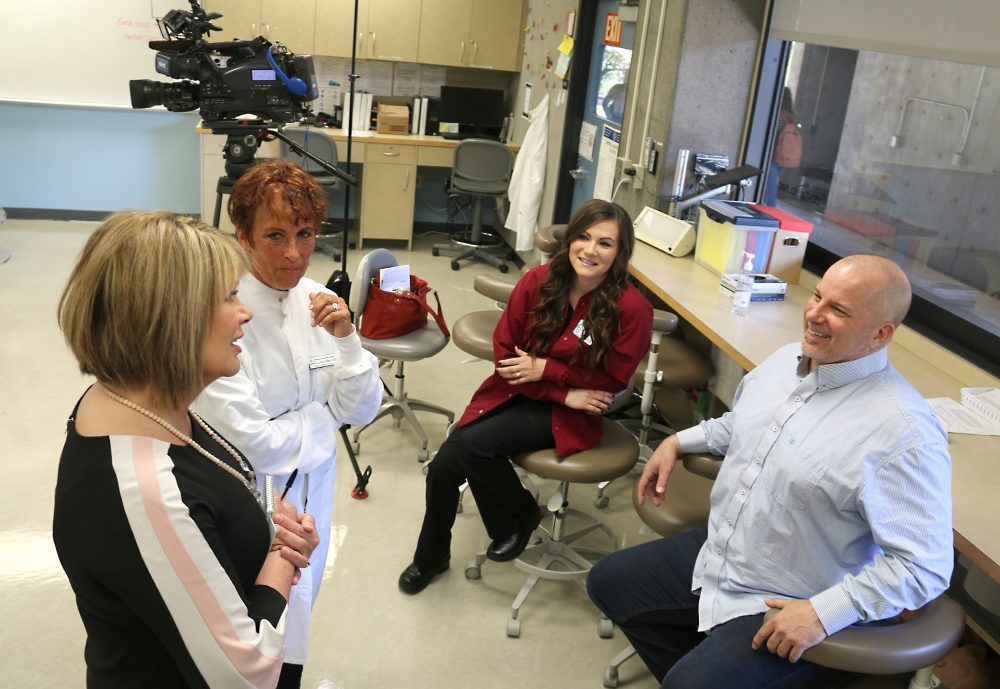 Kayla Roxey simply remembered her training, and it saved a person’s life.

In early 2017, Roxey was finishing her studies in Portland Community College’s Dental Hygiene Program. It was during a community clinic at the Sylvania Campus lab, where dental faculty work with dental hygiene students to provide them with real-world experience, that she noticed it. Roxey spotted a skin abnormality on a patient while performing her “EI” exam, which is a standard review of the patient’s head and neck, as well as inside the patient’s mouth.

“It looked like a clogged pore,” she said of the mark on the patient’s cheek. “It was super dark and had some shadowing around it. It looked like it went deep, but it wasn’t swollen or anything like that. We are taught to note everything on the head and the neck during these exams.”

Roxey then called over Dr. April Love, her supervising PCC dental faculty, to examine the patient.

“Dr. Love thought it looked suspicious, as well,” she said.

The dental instructor advised the patient he needed to consult a dermatologist and have the lesion checked out. It’s the sort of training that all dental hygienists within the PCC program are taught — to bring any potential health concerns to the patient’s attention. 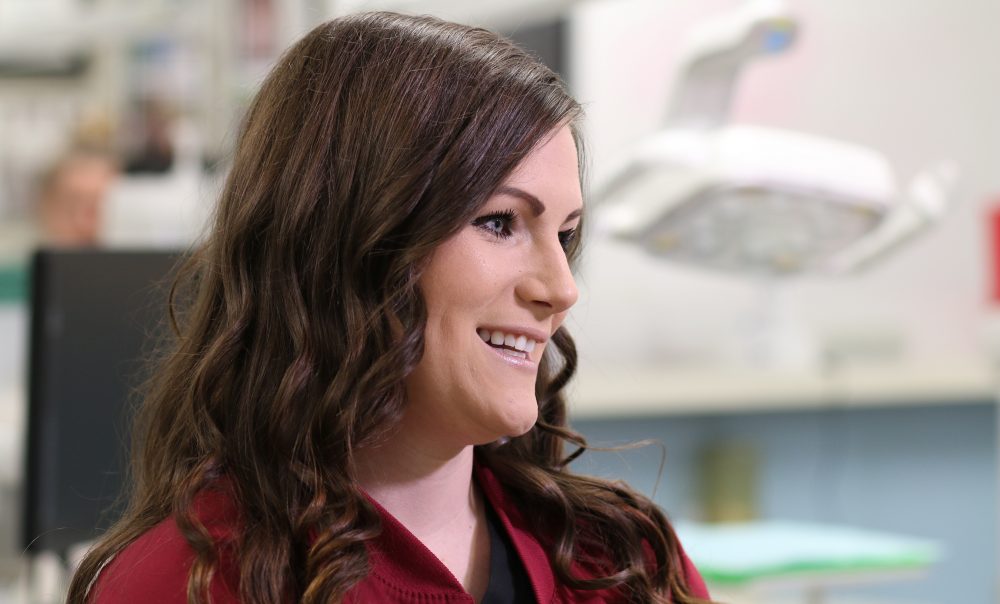 Student Catches What Others Missed

This particular patient was Shawn Montgomery. While attending Sylvania Campus in 2017, he was notified through the Sylvania Veterans Resource Center that he qualified for a free dental cleaning and check-up. The clinic would give him a service, and his visit would help his fellow students with their dental hygiene training.

“I usually go through another dentist for my dental care, but I thought the price was right and I would be helping out the school,” he said.

Laid-back and gregarious, Montgomery was back at school working on his associate degree in community development after a stint with the U.S. Marines. His dream was to work in a field where he could help people find affordable housing in a red-hot Portland real estate market.

He didn’t necessarily need to go to the PCC dental clinic, as he had visited a dentist just four months earlier and got a clean bill of health. As Montgomery saddled into the dental chair, he was assigned to student hygienist Kayla Roxey. He said she performed a scan of his head and neck and then went to work on his teeth. When she was done, Roxey consulted with Dr. Love, who stopped by to ask Montgomery more about the lesion on his right cheek.

“I hadn’t thought twice about it before,” he admitted. “Dr. Love is a light-hearted person, but all of sudden her tone was different and I thought maybe this was serious.” 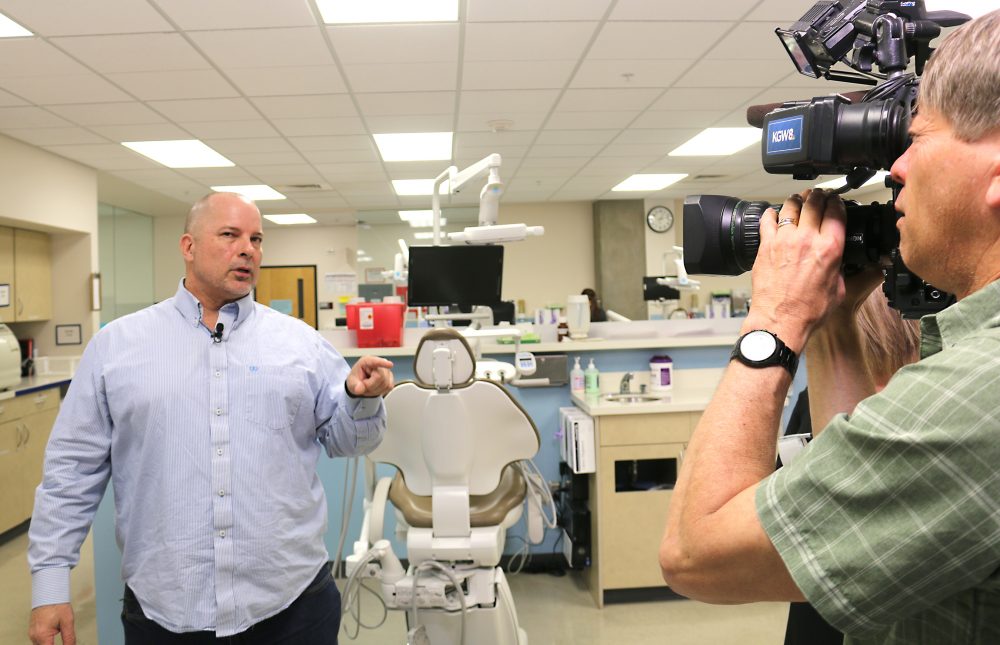 Montgomery tells the KGW cameraman about his lack of skin care as a youth that may have led to his cancer.

Shawn Montgomery waited two more months before he got it checked out because, as he puts it, he’s “a guy,” and prone to procrastination. He admitted to noticing the blemish the previous month and that he had no plans of doing anything about it because it was small — about the size of a pencil tip. “How bad could it be?” he thought. 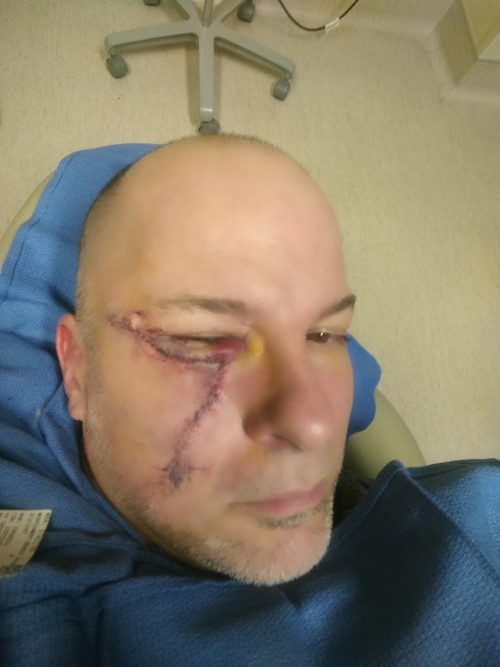 But with Dr. Love’s concerns imprinted on his mind, Montgomery eventually went to the Veterans Affairs Medical Center to see a dermatologist and have a biopsy done. The results came back positive for stage two melanoma, a common and deadly form of skin cancer.

“I should have freaked out, but I thought it would be a little snip and tuck, and I’d be on my way,” Montgomery said. “But that wasn’t the case.”

It took three surgeries at Oregon Health & Science University last November to remove the cancerous growth. Doctors tested the margins at each stage and determined they had to remove more and more tissue, which began to worry Montgomery. The growth turned out to be the size of an egg deeply embedded in his cheek. His surgeries resulted in 44 stitches and a permanent scar on his cheek.

As bad and scary as that process was, Montgomery is now cancer free and is very appreciative of the college, Roxey and Dr. Love.

“I don’t know what would have happened, but I’m here today thanks to PCC and its dental program,” he said. “Kudos to the school for everyone doing everything that they were supposed to. I’m so grateful to everyone who helped along the way.”

Dr. April Love was proud of Kayla Roxey’s attention to detail in her training. She said all of the students learn how to spot abnormalities within the mouth and on the face and neck in their academic classes. If something does not look right, they let the supervising dentist know their concerns so that the dentist can have a closer look.

“His was an early lesion,” Dr. Love remembered. “It was just a little black spot with uneven and reddish borders. I feel really good Kayla brought it to my attention, which is why we like to have dental hygienists in our offices as we count on them to see things that we can’t.”

Montgomery, who is finishing up his degree at Portland State University, turned out to be a prime candidate to have this melanoma. He admitted he had lots of exposure to the sun without sunscreen and went to tanning beds in his youth. In the U.S., a person dies of melanoma once every hour, and 7,000 men will get melanoma in 2018, but this is preventable. Montgomery is now spreading the word on skin protection from the sun and cancer prevention.

“I will forever be grateful to PCC for not only doing an amazing job teaching the students professionalism and attention to details, but keeping patients smiling and informed, and taking the time to look at the big picture while performing their job, and potentially saving a life,” he said.

Kayla Roxey has since graduated from PCC and took a well-earned break to have her first child. Now, she’s getting back into the workforce to become a full-time dental hygienist. It seems she’s hitting the ground running with an inspiring story to tell of how her training has paid off.

“I was shocked it was cancer,” Roxey said of Montgomery’s lesion. “But I’m happy it was caught through early detection at our clinic. It feels pretty awesome.” 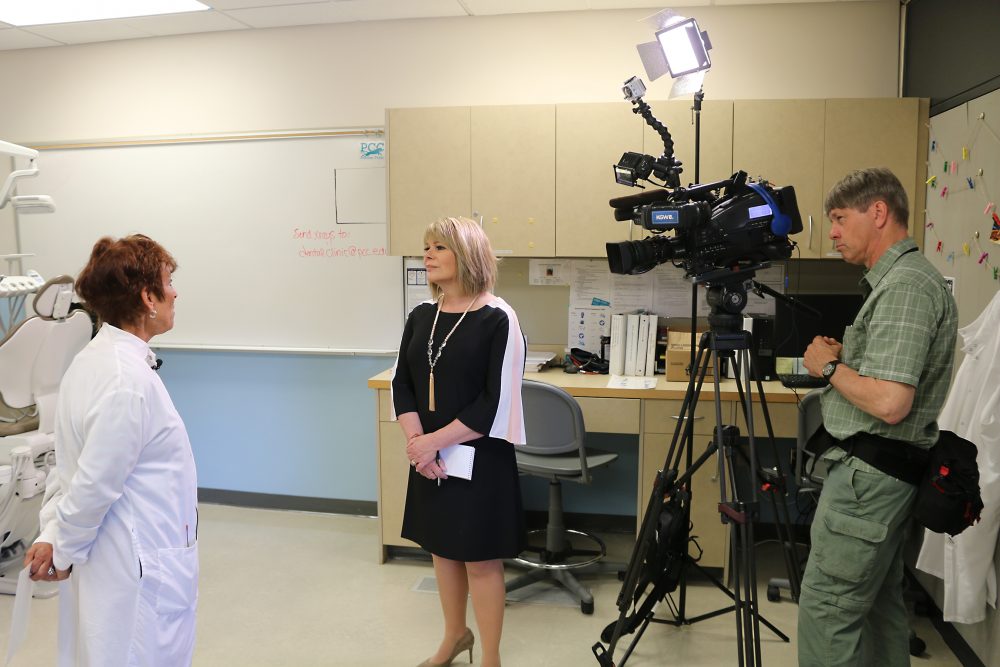 Dr. Love talks about the training students get at PCC.

Really appreciated this story. I’ve never had this happen to me, but in the 70’s, when a student, I took advantage of the dental hygiene program at Sylvania. With all the changes, new programs, technology, etc. it’s good to know that a thorough face-to-face, in person exam is still emphasized.
Katy

x by Tony Greiner 4 years ago

Good work all around, thumbs up. I’m proud of you.

Early detection is key to survival and quality of life. Skin cancer is the most common cancer. Melanoma is the most serious form. There is an old saying in medicine “When a man comes in for treatment, the leg is about to fall off”. Many men put off going to the M.D. They often complain about a “nagging” wife or girlfriend who advises them to see a healthcare practitioner. (Definition of Nagging = not doing something someone does not want to do when requested the first time. This necessitates repeated requests.” )

x by Sara Ries 4 years ago

Wonderful Story, and good work with your examination. I’m sure you will do well in your career.

x by Becky Olson 3 years ago

x by Joan Afflick 3 years ago

Wow! Thank God for grace. This is brilliant. Congratulations to all. Excellent observation!