This content was published: December 21, 2017. Phone numbers, email addresses, and other information may have changed.

Sandra Fowler-Hill, president of PCC’s Rock Creek Campus, was honored with the Carolyn Desjardins Leadership Award by the Oregon chapter of the American Association of Women in Community Colleges at its fall 2017 conference.

Committed to “inspiring, championing and celebrating the talents within each of us,” the organization celebrates this mission by annually choosing an academic leader who lives these values. Fowler-Hill was selected from a competitive pool of candidates, having been nominated for the award by her fellow PCC campus presidents – Lisa Avery of Sylvania, Karin Edwards of Cascade, and Jessica Howard of Southeast. 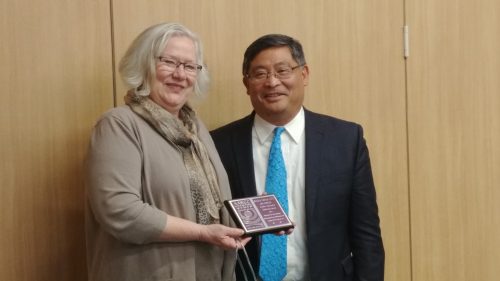 “I am deeply honored to have been chosen for this award,” said Fowler-Hill. “Carolyn inspired me, was a mentor to me, and believed in me at the beginning of my career when I worked in the Women’s Programs at Olympic College. For all of these reasons, this award means so much to me, personally.”

Desjardins helped to pave the pathway to opportunity for women in community colleges with the creation of the National Institute of Leadership Development in the 1980s, in partnership with Mildred Bulpitt, another highly respected community college leader. A part of the Maricopa Community College District (Tempe, Ariz.) for 26 years, Desjardins was the recipient of numerous awards and honors over the course of her career. During her tenure with the college system and NILD, more than 3,000 women — and many men — saw their lives enriched, enabled, and changed forever through programs, scholarships, articles and presentations Desjardins sponsored or made, and because of her advocacy and encouragement to live up to one’s potential.

Fowler-Hill was selected for the NILD leadership program in 1989, and it was that experience that confirmed, then helped to shape, her career as a community college leader.

“My life was certainly changed by Carolyn’s influence, and I have attempted to continue to ‘pay it forward’ by mentoring, supporting and believing in others throughout my career at four community colleges,” said Fowler-Hill.

“My goal to inspire, champion, and celebrate women leaders has been based on wanting to mirror the work of Carolyn, whom I greatly admired. To now be honored with this leadership award, in her name, is humbling.”

x by Maria Juarez 4 years ago

Congratulations on receiving this well deserved award Sandra. Thank you for all of your hard work and dedication.

x by Dorina Cornea 4 years ago

Well deserved, congratulations to our RC President and Champion!