This content was published: December 4, 2017. Phone numbers, email addresses, and other information may have changed. 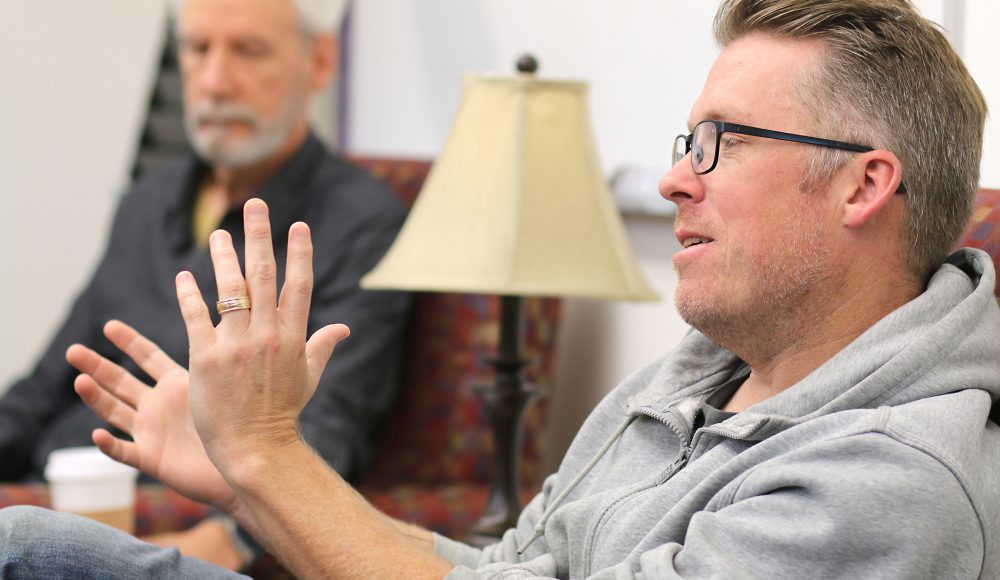 The discussion began with Colin Kaepernick of the National Football League, and what ensued was a spirited discussion about patriotism in America.

On a dreary and cold fall day, a modest gathering of Portland Community College staff and faculty sat in a circle within the comfortable confines of the Sylvania Campus Teaching Learning Center. The focus of the conversation was “Patriotism and Protest,” where attendees evaluated the associated philosophical and practical issues. Despite differences of opinion — and the potential for conflict given the topic — there was no shouting, aggressiveness, petty insults or mock gesturing. People shared their thoughts, listened, and learned in a respectful manner, exploring a national issue that has been everything but these things.

The group explored a myriad of questions:

“While Colin Kaepernick galvanized the conversation, this is something that has been stretching back in history with athletes since as far as I can remember — this idea that if you protest during some sort of athletic event, it’s somehow out of place,” said John Farnum, philosophy instructor. 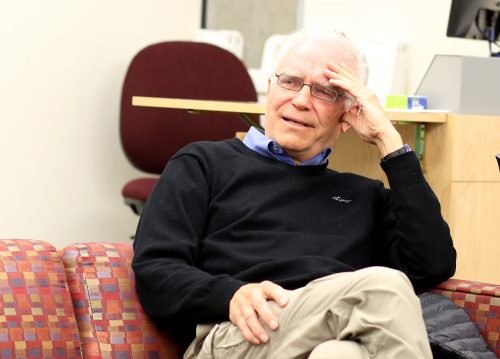 The Center for Civic Participation at PCC (CCP@PCC) regularly presents conversations dedicated to current topics of concern that affect the college and community.

The Center for Civic Participation at PCC (CCP@PCC) regularly presents conversations dedicated to current topics of concern that affect the college and community. Its “Meaningful Conversations” is an informal, discussion-based format where facilitators strive to create a place for open and honest dialogues that challenge participants to think about and reflect on difficult topics. The effort is part of a broader movement to create alternatives to polarized, adversarial, and polemical conversations. The sessions are held every term; the date and time for the 2018 winter term is being scheduled.

“I’m always excited to have these conversations,” Farnum continued. “For me, I want to learn something new from others who attend. The new information can change my mind in different ways.”

The CCP@PCC is inspired by the work of the National Issues Forum model developed by the Kettering Foundation. The underlying philosophy is that people need to come together to deliberate and discuss common problems. With decision makers often far removed from the everyday person, participants believe that democracy requires ongoing, informed dialogue among citizens in order to be effective and successful.

Farnam added that all points of view need to be brought to the discussion table, but expressed within a structure that helps people listen and learn across their many differences. Leaders of this movement at the college include Farnum, Matt Stockton (philosophy instructor) and Neal Naigus (PCC community partnerships manager).

A similar approach could be applied to addressing differences embedded within the national conversation about whether what Kaepernick did on the football field in 2016 (kneeling for the anthem before his NFL games) was unpatriotic and has the response to it been appropriate. Currently, the ex-San Francisco quarterback hasn’t found work with any NFL team, and some suspect it’s because of his anthem protest.

During the “Meaningful Conversations” event about patriotism, computer science instructor Michael Trigoboff responded, “There is a saying, ‘family, right or wrong,’ which I totally subscribe to. Somebody in my family could do something really bad, but it’s my family and I feel different toward my family than other people. It’s more of a tribal, emotional thing than anything intellectual.”

The discussion raced on but never got heated: Just a rational point-and-counterpoint roundtable between people. Something that is typical of CCP@PCC’s “Meaningful Conversations” — and that seems scarce these days, in the greater community.

The CCP@PCC is inspired by the work of the National Issues Forum model developed by the Kettering Foundation and is a forum where people come together to deliberate and discuss common problems. Format mirrors:

I am glad faculty members were able to discuss these issues of importance. If people with opposing viewpoints don’t have discussions, rather than shouting matches, then our country will continue to radicalize in both directions. I have twice at PCC been shouted down by students in my classroom for simply having a different opinion and it is a serious problem on campus. Nobody speaks their mind out of a fear of being called a racist, islamophobe, sexist, homophobe, etc. However, when I spoke up and set an example the second time, others stood up and defended me while the discussion was able to head in a direction that otherwise would never have happened.

Typically, the politicization of any source of entertainment is going to sour it for some audience members. Alienating a majority of your audience is acceptable and legal, but stupid. The NFL will reap what is sows. They have every right to engage in protest, but the NFL has the ability to reprimand them as they see fit. This is often unfairly enforced, such as patriotic garb (socks for example) being banned on the field. Also, christian and muslim players alike have been reprimanded for praying on the field. It is a good thing Americans are aware of their purchasing power and are sending a message to the NFL with their boycott. The NFL’s hypocrisy shows the entire league has a progressive slant that has been alienating their fans.

x by John Brown 4 years ago

Patriotism, as a whole, never has been and never will be a beneficial thing. It is roughly defined as an emotional devotion to one’s country. It is just a loaded, more savory term for extreme nationalistic fervor. Nationalism is one of the most destructive paradigms that we are suffering under today. I, as an American citizen, feel a stronger bond with a factory worker in Bangaladesh than with a Rockefeller in New York. American nationalism specifically has caused so much unspeakable pain throughout the world and in our own community. This country was never great. It was built with slave labor on stolen land. The genocide of the indigenous and the slavery of African folks never ended. The sooner that this nation is torn asunder the better.

x by Sharon Bolden 4 years ago

I would like to participate in the next discussion. Where and when will it be?

x by Jan Zingraf 4 years ago

I really appreciate this concept. I think many of us need to learn some new skills in approaching difficult topics. I will watch for an opportunity to attend a future session. This article also prompted me to look up winter term philosophy classes. Thank you!

x by Zac Long 4 years ago

To those who think the country is not great, I must disagree. This country is not perfect by any means, but it is great. We, as a nation, have produced the highest standard of living in the history of mankind. The world as we know it was built on slave labor and stolen land. Is this acceptable in our modern society? Absolutely not, it’s barbaric. Is there injustice in the world today? Certainly. There always will be. There is no such thing as a utopia. I’m not saying we shouldn’t continue to strive toward that noble goal, but I think to say that this modern society we live in isn’t great due to its past indiscretions is ridiculous at best. I strongly encourage you to spend some time abroad in a few third world countries before passing such strict judgement on your own.

x by Dallas Davis 4 years ago

When the winter date is planned please make it obvious for online students. I’m worried I wont see any flyers because I’m only on campus once or twice per term, but I would love to attend this.

x by Don Anonymous 4 years ago

Mr. Brown, with all due respect I have to disagree with you. There is nothing inherently wrong with nationalism. Desiring independence and the success of the nation which you were born into or more importantly the nation you CHOSE to immigrate to is NOT a position of ignorance or hate. Extremism in any form is toxic. That goes for extreme nationalism and extreme globalism. This country IS great. I challenge you to spend time in places like the former Soviet Union. Maybe you would understand then why some of us chose to come here. Perhaps you would understand why this nation – even with its flaws – is still a great place. The nation absolutely has problems. No one can deny it and call themselves serious. All nations have problems but it also sounds like your solution is to throw the baby out with the bathwater. I can’t agree with that approach. You don’t want to burn down the entire forest because a few trees have disease.

I can’t warn you people enough of the dangers of radical leftism and the dangers of communism. Millions of dead proles and bourgeois are hard to argue with.

x by No Thankyou 4 years ago

I have a hard time feeling comfortable in a discussion led entirely by white men, one of whom pictured here failed to intervene in a class room screaming match and did not stand up to, confront, or kick out a student who shared such gems with the class as ‘when I was in the military, I didn’t mind killing people. It wasn’t bad.’ and ‘well, mentally ill people are basically pets, right?’. That student, who was a young white man, was allowed to remain in the class and comment without intervention. It was up to the students to defend the mentally ill, gay, trans, and people who aren’t white. It was a wild, unfortunate ride, and I am not sure why this discussion would go any better.

x by No Thankyou 4 years ago

^ that being said, I haven’t probably wont be attending any of these informal meetings and while it is probably going to be horribly activating for any person who is not a straight white cis vaguely christian dude, maybe you other white dudes will help change their minds. Kudos for trying.

The double standard with the above poster is amazing, look at how they group all white men together and assume a level of privilege. This is what college students are being taught today. This person would feel uncomfortable listening to a white male in a discussion?? What a racist/sexist comment to make, and I suppose they would rather we censor the speech of their classmate than confront it. This is a problem, freedom of speech is integral in protecting minorities, not just the majority. Freedom of speech is under attack on college campuses and we should not stand for it. Where are the conservative/libertarian instructors??