This content was published: October 31, 2016. Phone numbers, email addresses, and other information may have changed. 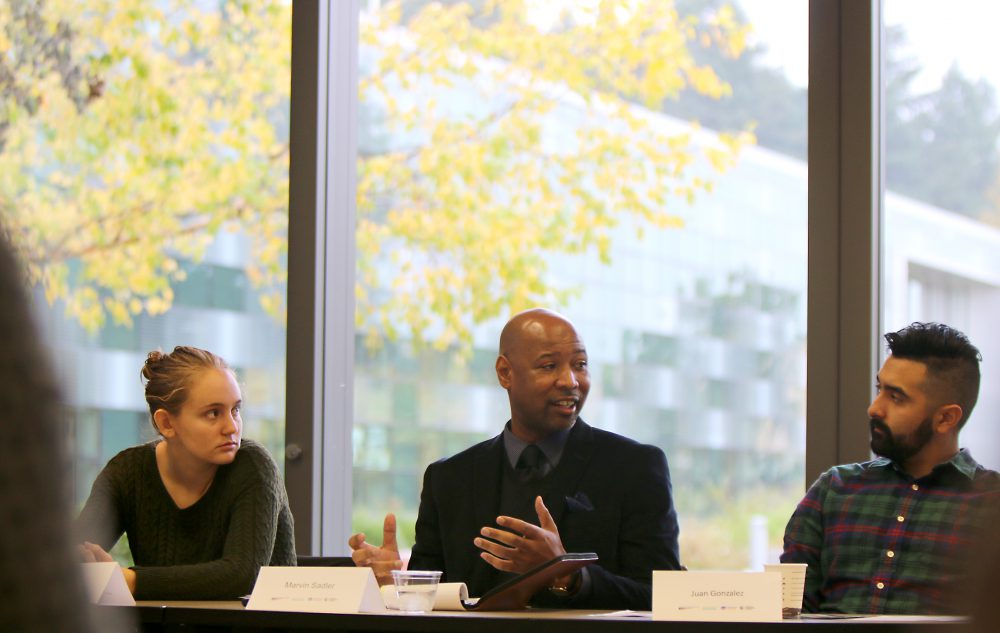 During October PCC became the epicenter for the topic of college affordability.

The college welcomed best-selling author Sara Goldrick-Rab, a professor of Higher Education Policy & Sociology at Temple University, to its Cascade and Sylvania campuses for several talks. She discussed affordability, food instability and student debt – all issues PCC is exploring.

Goldrick-Rab’s book “Paying the Price: College Costs, Financial Aid, and the Betrayal of the American Dream” is an Amazon Best Seller. It explores the public debate about the value and price of college and tackles the assumption that if students work hard enough, they’ll be successful. 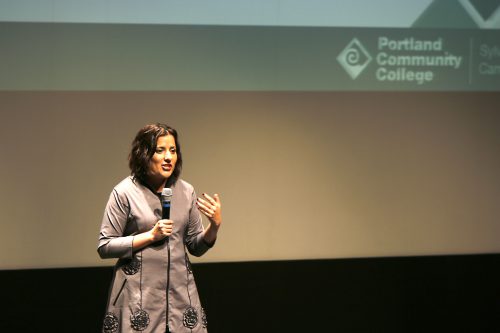 Her book focuses on a study of 3,000 young adults who entered public colleges and universities in Wisconsin in 2008 with the support of federal aid and Pell Grants. Goldrick-Rab, who taught at the University of Wisconsin prior to being hired by Temple, found that students suffered from a lack of money once they’d arrived at school; they were unable to afford books and living expenses, in addition to tuition. As a result, they worked too many hours at outside jobs, dropped classes, took time off to save money, and at times went without adequate food or housing.

“We worked with a student who was forced to go into a homeless shelter, got raped and had a baby,” she said, noting 13 percent of the students were homeless. “And there were many more students who found themselves on the street. And this isn’t a Midwestern thing. Ivy League schools struggle with these issues (in different ways.)”

Goldrick-Rab discussed how students dealt with their homelessness. She shared that some universities had staff stand in line at local homeless shelters on behalf of students. This ensured the students could have a bed once they finished their day’s classes. Some students masked their body odor from lack of showering by ripping fragrance ads out of magazines at their school’s library. She added that men, especially, had a hard time as they typically refused to ask for assistance.

“Their sense of shame prevents them from reaching out for help because they feel it wouldn’t be beneficial, but hurtful,” Goldrick-Rab said.

Goldrick-Rab wasn’t the only big name visitor hammering home the importance of college affordability. U.S. Sen. Jeff Merkley made a visit to PCC’s Sylvania campus where he encouraged students to register to vote and addressed the problem of student indebtedness. The final event on this topic was the Student Debt Workshop and Roundtable at the Rock Creek campus, headlined by U.S. Rep. Suzanne Bonamici.

The roundtable helped the Congresswoman gauge the issues and experiences of the panel, made up of community members and PCC students and staff. Rep. Bonamici said she wants to push income-driven repayment plans as a way to help students avoid digging too deep of a hole. The loans are based on income and family size, and are operated under the Federal Direct Loan Program.

But there’s a long way to go to fix a system where students of modest means are forced to take out large loans to earn a degree, according to the panelists. Elijah Herr, PCC’s assistant director of Financial Aid, talked about how nontraditional students at the poverty level can demonstrate signs of post-traumatic stress disorder after they’ve opted to take out loans to pay for college. Even Marvin Sadler, a senior student account specialist and financial success coach at PCC, has had challenges funding his education. He told Bonamici he maxed out his credit card to pay for the first year of his graduate program and will have to borrow more in student loans to pay for the second year. 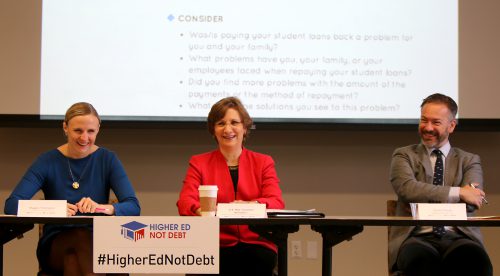 “It’s great to hear your stories,” noted Bonamici. “It takes this from the abstract to being real.”

Student Sirianna Lilly told Bonamici that she hasn’t had to take out loans to fund her PCC education, but knows she’ll have to when she enrolls in graduate school, which scares her.

“I’ve worked with students from various backgrounds and it’s a balancing act to fund their education,” said panelist Jim Perez, PCC’s interim vice president of student affairs. “Sometimes they leave with the question of wondering if pursuing an education is worth it. This is a continuing problem.”

For more on these initiatives, visit www.studentaid.ed.gov.

x by Steffan Rigoulet 4 years ago

Any discussion regarding college funding must begin with the questions “What do I expect from my college degree?” and “How viable is my degree in today’s employment market?”. Pursuit of a college education must first and always be about quenching a thirst for knowledge and true learning. To expect that a degree will open golden doors to financial success is unrealistic; the job market is too competitive for such an expectation. As cold as it may sound, colleges and universities are first and foremost money-making enterprises. As such, students should take heed in the words “buyer beware”.

x by Cato Boblet 4 years ago

Steffan Rigoulet, your statement sounds cold because it is.
How about instead asking the questions “How will I expect to make a decent living in this country WITHOUT a college degree?” and “How ‘qualified’ am I as a candidate for a particular job if everyone else applying has college degrees?”.

x by William A. 4 years ago

I have to agree with your first sentence, but past that I have to respectfully but wholeheartedly disagree. If you want to flip burgers, work manual labor, retail or service industry for slave wages, then by all means don’t get a degree OR go to school. IF however you want to get a job paying enough to NOT live paycheck to paycheck, hand to mouth, with functional medical and dental insurance, and the ability to invest, and eventually own property, there aren’t many options other than military service for those who don’t start “well off”. There are some exceptions to this, involving luck, hard work over many years, or being at the right place at the right time, but these are few and far between. You are correct, the degree won’t “Open magical doors to instant wealth”, but you may want to review the application qualifications and requirements for many companies around the US and Canada for jobs with starting wages 50k plus. They begin with Bachelors (or higher) of ‘related field’ as one of the first requirements.

Additionally, while you are correct that there are a good many for profit colleges, keep in mind that PCC is a non-profit public institution, with one of the lowest costs per credit in the area. Also keep in mind that many of the folks that work for PCC chose working for this institution at a lower pay rate then they could get working in the for profit industry. Why? Because for some of us it is more important to have done something good to advance society, and help people, then to increase our personal wealth. Additionally, one of the largest driving forces of the increase in college tuition is the cost of books and materials, which you can thank all the greedy publishing corporations for. This is being challenged with OER’s (Open Educational Resources), and slowly increases its saturation. There are also tons of free MOOC’s, and other autodidactic resources available, like Kahn Academy, that are making the enrichment of knowledge at the fingertips of any with a computer and the internet (your local library is one option).

I agree with the “buyer beware” sentiment, and encourage taking advantage of the career exploration centers (they have tons of resources to help you match your strengths and interests to careers, and help research possible careers including average starting pay, long term pay, supply/demand in the region and the like) and other resources like career pathways and the like. Also you might be interested in one of the many programs at PCC like the ‘PCC Foundation’, whose goal is to improve access and opportunity to college. Scholarships, that is one of the few ways to help with the burden of the cost of education.

While I agree that the academic systems in place in the US are seriously flawed {especially compared to many in Europe, Norway as a shining example} and skewed towards the upper middle class and above, there are a good many institutions that are working hard to bridge this gap for the many disenfranchised members of our society. This is just one of many systems and institutions in the US that need systemic change, and there is a lot of work to engage in conversations, and work towards not only understanding these issues, but finding long term solutions to dramatically change our society to become an inclusive one.

x by Joshua 4 years ago

I agree with Steffan Rigoulet, however, I would also say that with government money comes government restrictions and mandates. Our system of Education is already heavily propagandized and free speech is suffering. We should find a way to lower the costs without more government intervention in education. We have the power as students to choose not to attend expensive schools, this is just one way we can do this.

To William I will say that I have actually worked in fast food with two people who have had masters degrees. The degree matters. Debt matters.

x by William A. 4 years ago

To Joshua, I don’t doubt it, especially in the years following the dotcom bubbles burst(2002). Since that crash, many have had to grovel for any scraps available to get by, myself included. One of my jobs since that point, I had not 1, but 2 Nasa engineers with either a Masters of a PHD (and 20+ years exp at NASA), working as first tier phone tech support agent, for just above minimum wage. Having a degree is not a guarantee of success and wealth, nor is not having one a guarantee that you can’t attain a decent paying, benefitted career. What I am saying is that not having a piece of paper that says you stuck it out and learned subject X (a degree), is often a barrier to decent paying careers. The potential with a degree vs without one, not only exists, but is increasing. In fact one of the most recent studies, shows the median wage difference between a HS grad, and a college grad is $17,500 per year. Many more doors will be open with a degree than without one (like officer candidate vs enlisted military).
I also wanted to clarify that I’m not disparaging working fast food, retail, or the like. I’m disparaging the pay for the work done.

x by News: College wants to gauge impact of affordability issues on its students | PCC 4 years ago

[…] Last term, the college hosted noted author and sociology professor Sara Goldrick-Rab, who discussed these issues and more at forums around the […]