This content was published: October 30, 2015. Phone numbers, email addresses, and other information may have changed.

Acoustic upgrades at Cascade gym prove to be a sound choice 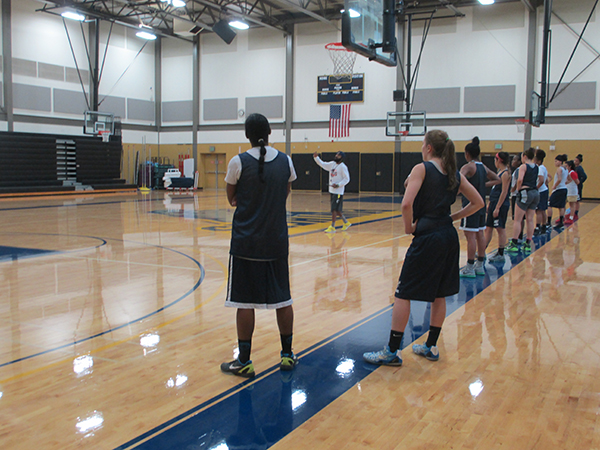 PCC’s John Slaughter leads a women’s basketball class at Cascade. Thanks to 2-inch-thick acoustic foam panels that were recently installed on the walls and ceiling of the gym, many instructors say that they no longer have to shout to be heard by students, or use a microphone.

Up until this fall, being a spectator, student or staffer in PCC Cascade’s Physical Education Building wasn’t all fun and games.

By most accounts, the gymnasium there was the worst in the college for acoustics – to the point where audience members couldn’t converse face-to-face, instructors had to yell to be heard during classes, and office staff was subjected to the constant cacophony of basketballs slamming against hard surfaces.

Now, because of improvements funded by the 2008 bond measure and completed in August, Cascade’s gym has the best acoustic quality and sound system in the college.

“The gym is a big classroom and the new system has really improved the overall sound quality, especially when it comes to instruction,” said Dick Magruder, PCC’s athletic director. “PE Department Head and Instructor Levi Query said students came up to her after their first class in the newly renovated gym and said they thought she was speaking louder, and she said ‘No, we got a new sound system.’ ”

The acoustics were also a problem during large events. The gym – home of the PCC Panthers basketball teams – seats 500 people and is one of the busiest in the college.

The first step was to bring in an acoustician to study the sound delay time in the gym, a measure of how long it takes noise to disintegrate, said Tyler Brown, media services specialist for the bond program.

“Ideally you want a half-second to a few seconds’ delay. We were well over a four-second delay time,” he said. “We were dealing with quite a bit of noise bouncing around the room to where you couldn’t have a face-to-face conversation because you end up talking over the sound you’ve already put out. It just builds and builds and builds, and when you get too many people in there it’s impossible to hear anything.”

During classes, instructors often had to use a microphone or shout over the noise to be heard.

The other challenge was the sound system. According to Brown, the speakers were inadequate for the space and were aimed at the corners of the gym instead of the audience. Re-positioning them helped somewhat, but for many events the college had to bring in a free-standing sound system. 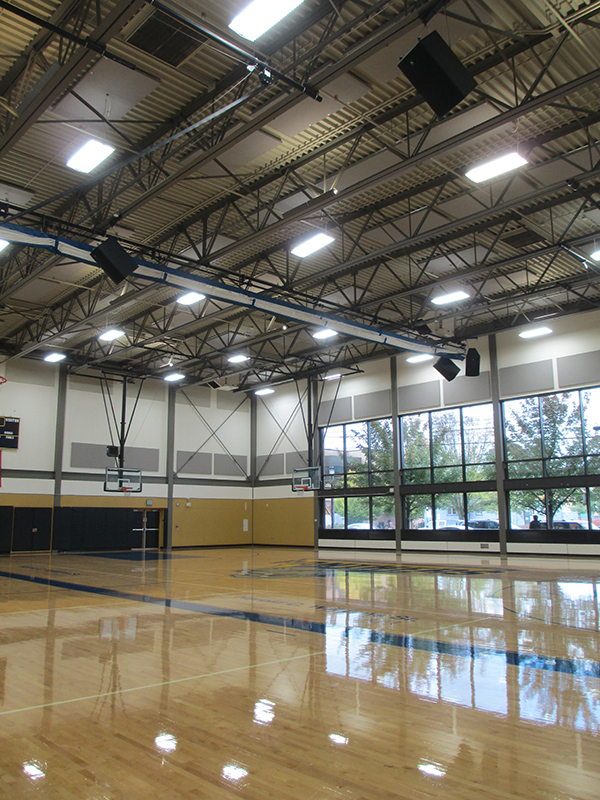 To deal with the acoustic problem, 2-inch-thick fiberglass foam panels designed to absorb sound and resist the impact of basketballs were installed on the gym’s ceiling and walls. This treatment dramatically reduced reverberations, which are the continuation and multiplication of sound that reflects off hard surfaces and causes an echo, said Brown.

The speakers were replaced with a new system, which includes components from Biamp, a company located in Beaverton.  The five new speakers – two for classes and floor-seated events and three for the bleachers – can be used separately or together in different configurations; the old system had just two settings, on or off, said Tyler.

As required by the Americans with Disabilities Act, an assistive listening system was added for the hearing impaired.

Thanks to the upgrades, the change in acoustics in the gym is like “night and day,” said Brown.

“We totally cut the reverberation time,” he said. “We have students who noticed the difference without even knowing we did anything. They could hear and understand their instructors so much better, without any kind of microphone. It’s been a vast improvement and something that the space has needed for a long time. It’s going to make basketball games so much better.”