This content was published: June 1, 2015. Phone numbers, email addresses, and other information may have changed. 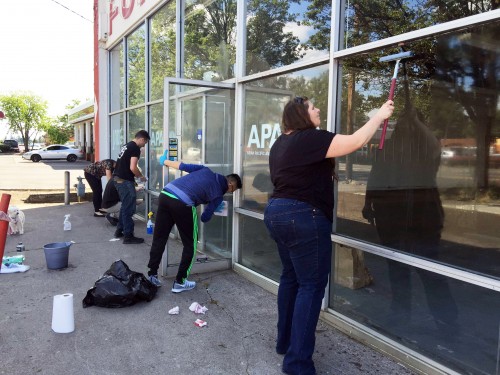 ASPCC student leaders chip in to help remove graffiti on building across the street.

Over the Memorial Day weekend, the building across the street from the Student Commons at the Southeast Campus was tagged with graffiti along SE 82nd Avenue. Even during the busy academic month, student leaders with ASPCC jumped into action to assist Jade District staff remove the graffiti a day later. The students included Tai Pham, Ben Beiser, Blake Dressel, Miranda Kuntz and LiShao Chen.

This building and the southwest corner of the intersection of SE Division Street and 82nd Avenue is a key site in the community visioning led by the Jade District, a Neighborhood Prosperity Initiative urban renewal area. It was purchased by Metro Regional Services last January to support the future Powell-Division Bus Rapid Transit alignment.

Metro is planning to solicit development proposals for the property in the next 18 to 24 months. In the meantime, the agency partnered with the Jade District and APANO to temporarily lease the space for use as a community meeting center.

x by Christine Egan 6 years ago

We have amazing students at PCC SE Campus. Even with their very busy schedules at work, school and home, they make the time to contribute to the surrounding community in SE Portland. Thanks guys — I am in awe!

x by Esther 6 years ago

x by Lacy Wooldridge 6 years ago

I am so honored to be in the presence of such amazing people every day!

x by Nicole Seery 6 years ago

Our students in ASPCC Southeast truly embody the spirit of servant leadership. I couldn’t be more proud!

x by Dona Auer 6 years ago

It makes you proud to say you work for PCC or go to PCC as a student when you find there are so many students willing to give back to their community. The four students mentioned in this article and countless others throughout PCC campuses, make us all proud. These are the types of people we want to represent us. It’s reassuring to know that their motivation and service to the community will help them grow into even more responsible and caring adults. Young people are our future.