This content was published: May 18, 2015. Phone numbers, email addresses, and other information may have changed.

Portland Community College is bringing in an internationally recognized art historian, curator, artist and educator for its 2015 Portland Women in Art Lecture Series.

Leslie King-Hammond is set to speak at 7:30 p.m., Thursday, May 21, in the Performing Arts Center, Sylvania Campus (12000 S.W. 49th Ave.). King-Hammond’s talk, “An Odyssey of Opportunities: My Life in the Art World,” will address her multifaceted career, whose roots stretch back to her childhood in New York City, where she first discovered her love of archaeology and art. Through her research, writing, and curatorial endeavors, she has brought many historical and contemporary African-American artists into the canon of American art. Admission is free and the public is welcome. Parking is also free at the campus. American Sign Language interpretation will be provided. 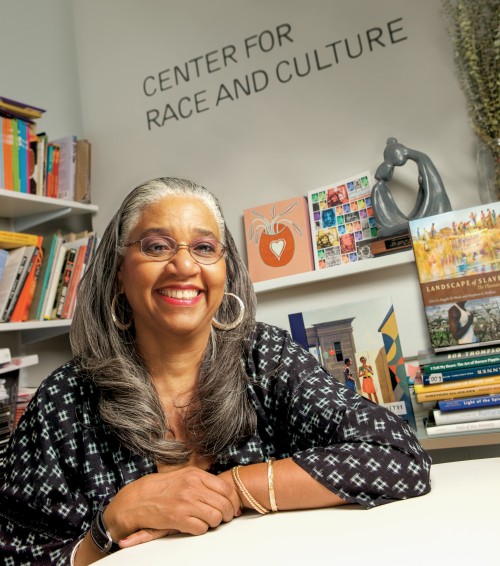 Through her research, writing, and curatorial endeavors, Leslie King-Hammond has brought many historical and contemporary African-American artists into the canon of American art.

The goal of the lecture series, which was founded in 2010, is to bring important women from the visual arts field to the students and faculty of Portland Community College as well as Portland. The series focuses on pioneering feminist artists and women significant in the fields of art and art history.

“I am especially excited to share my life in the arts with the Portland academic and arts community,” said King-Hammond. “My fascination has been with those aspects of America that have not been perceived as part of the mainstream art world. Portland has always had its own sense of identity and artistic richness. It will be a joy to share my experiences and learn more about the wonders of Portland.”

King-Hammond received her bachelor’s degree in Fine Arts from the City University of New York, Queens College. In 1969, she moved to Baltimore to attend Johns Hopkins University, from which she received her doctorate in art history in 1976. Her artistic and professional life has unfolded in that city, primarily at the Maryland Institute College of Art, where she served as dean of graduate studies and taught art history. She is founding director of the Center for Race and Culture and Graduate Dean Emerita at the college.

She has written on the works of such artists as Jacob Lawrence, Bettye Saar, Aminah Robinson, Beverly McIver and Hughie Lee-Smith. Her exhibitions include “Celebrations: Myth and Ritual in African American Art” (Studio Museum in Harlem); “The Intuitive Eye” (The Maryland Art Place); “Art as a Verb” (Maryland Institute College of Art, Studio Museum in Harlem and the Met Life Gallery); and “Black Printmakers and the WPA” (Lehman Gallery of Art, New York).

King-Hammond has won lifetime achievement awards from the Studio Museum in Harlem (2002), The DuBois Circle (2006), the Women’s Art Caucus of the College Art Association (2008), and the James A. Porter Colloquium, Howard University (2008). In 2008, she was awarded an Andy Warhol Curatorial Fellowship while the Detroit Institute of the Arts gave her the Alain Locke International Prize in 2010. Recently, the Maryland Institute College of Art honored her by creating the Leslie King-Hammond Graduate Fellowship Award, which will allocate scholarships for diverse candidates to its graduate programs.

The lecture series is funded by Portland Community College and the Sylvania Campus ASPCC. Additional support has been provided by the Sylvania Campus’ Diversity Fund, the Rock Creek Women’s Resource and Multicultural centers, and the School of Art And Design at Portland State University.