This content was published: May 11, 2015. Phone numbers, email addresses, and other information may have changed. 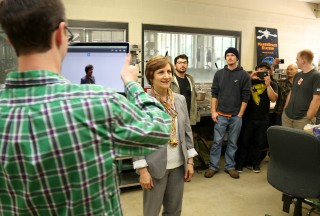 Congresswoman Suzanne Bonamici is scanned by Ben Hill at the MakerSpace for 3D modeling.

On Wednesday, May 6, United States Representative Suzanne Bonamici was given her own personal tour of Sylvania’s MakerSpace laboratory, an interdisciplinary innovation studio that caters to the art and science of transforming creative ideas into tangible objects. Thanks to rapid prototyping machines such as 3D printers and scanners, CNC machines, lasers, vinyl cutters, sheet metal tools and an injection molder, students and faculty can create everything from prosthetic hands to recumbent bicycles, animatronic theater and wearable tech.

During her 45-minute visit, Rep. Bonamici visited with faculty and students, in addition to Dieterich Steinmetz, M.D., division dean of Science and Engineering, and Gregg Meyer, engineering faculty and MakerSpace lead. While touring the space, the Congresswoman posed for a headshot, which was scanned and converted to a 3D image that became part of a plastic mold. Boiling metal was poured into the mold, producing a medal displaying Rep. Bonamici’s photo. Next, she was presented with an individualized box cut from a 3D printer, to hold her medal. And finally, using a laser Rep. Bonamici cut two stars to add to a 48-star United States flag from 1907 belonging to engineering support technician Ben Hill.

The MakerSpace lab was made possible in part by Intel Corporation.