This content was published: March 17, 2015. Phone numbers, email addresses, and other information may have changed. 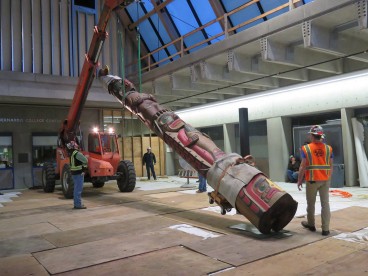 After years of being weathered by the elements outdoors, PCC’s prized “Welcoming Pole” has been erected inside the newly constructed east entry of Sylvania Campus’ College Center.

Early this morning, the 30-foot “Welcoming Pole” that once stood watch over a grove of fir trees on the north side of PCC’s Sylvania Campus was erected inside the new two-story atrium in the east entry of College Center.

Howard S. Wright Construction, the college’s construction manager/general contractor for the Sylvania Campus, hired Ness and Campbell Crane Inc., a 47-year-old Northwest company, to raise the pole in its new home while another Northwest firm, Structural 21, bolted the pole to the steel column that will hold it in place.

While the new entry was being remodeled as part of the 2008-voter approved Bond Program, the “Welcoming Pole” was first moved by Santana Crane Co., a firm from Salem, to a temporary location outside the HT Building where it spent several weeks drying out under the eaves. It was then moved by Santana to an indoor space on the south side of the new entry area in College Center.  Here, Richard Hunt, the totem’s artist,  painstakingly refurbished the pole, which had sustained considerable natural wear and tear from exterior elements, including a resident woodpecker. Hunt and PCC art faculty members repainted and performed restorative work in preparation for the pole being erected in its new interior home. 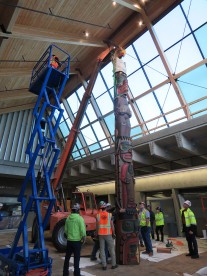 In addition to being protected from elements, the totem’s new home in the busy east entry atrium will allow it to be enjoyed by more people.

The new entry’s tall beamed ceiling and generous windows will provide a perfect venue for viewing one of the college’s most prized possessions. With the “Welcoming Pole” in place, finish work on the east entry will continue through April. The new light and vibrant east entry is scheduled to open May 2015.

Notes on the “Welcoming Pole”

The totem was commissioned by PCC and first installed in 2001. Richard Hunt, a noted fourth-generation Kwa-Gulth (Kwakiutl) artist in British Columbia, carved the single log of red cedar largely with hand tools using traditional techniques, and painted it with house paint. It depicts the imposing visages of an eagle, bear, serpent, and man holding a salmon and was inspired by the ceremonial crests of the Hunt family of Kwakwaka’wakw Nation.

Since it was first erected on campus, the pole has been an important visual feature, welcoming visitors and serving as a reminder of the school’s cultural awareness of indigenous people. 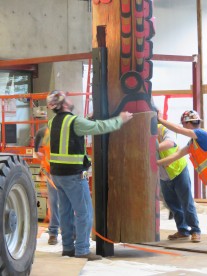 Erecting the “Welcoming Pole” in its new space required heavy equipment and many hands. 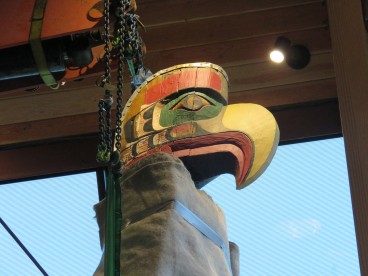 Before being moving into its new home, the totem was restored by its artist, Richard Hunt. In addition to applying new paint, Hunt repaired several holes created by woodpeckers.