This content was published: March 19, 2015. Phone numbers, email addresses, and other information may have changed.

It was snowing and seven degrees below zero, but for a handful of Portland Community College students headed to the U.S. Hispanic Leadership Institute (USHLI) in Chicago, it was all good. 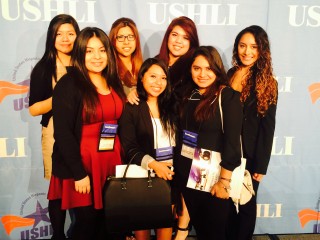 Irene Ramirez, a sophomore from Hood River majoring in chemical engineering, returned from the trip with two particularly clear memories. “The weather for sure, but I’ll remember what it felt like to be one of 1,500 students at the conference and how inspiring the speakers were. We are expected to motivate other students. Get them to vote. Get them involved. One way is through voter registration.”

For Casandra Garcia, a dual-credit senior at Beaverton High School and a sophomore majoring in biology at PCC, what was most memorable was that most states had five or six student representatives at USHLI, while Oregon had 101.

“We were very lucky with our fundraising,” she said. “Rock Creek’s Multicultural Center sold Trail Blazer tickets online, and the center had some funds in its budget that also helped. It was enough to support seven students and one coordinator, just from our campus.”

Other surprises listed by the students included the strength of the workshops, Chicago’s architecture and food, the Field Museum of Natural History and the people of Chicago. They were surprised by the difference in diversity. “In Chicago, we saw very few Hispanics but a lot of African Americans,” said Garcia. “I didn’t expect that.”

Students who participate in USHLI must agree to share what they learned with other students, both to motivate them to engage in civic life and to encourage other students to consider attending USHLI in 2016. Ramirez and Garcia hope to lead a discussion about their conference experience during Rock Creek’s Semana de la Raza week at the end of April.

x by Josephine 6 years ago

Congratulations to all of you! It must have been a great experience. I look forward to hearing more about it in April.