This content was published: January 22, 2015. Phone numbers, email addresses, and other information may have changed. 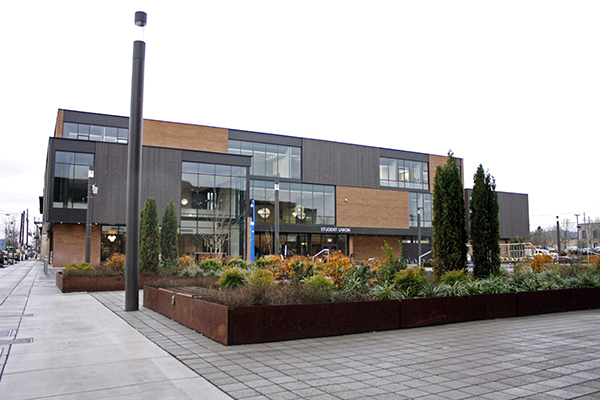 THA Architecture designed Cascade Hall and the new Student Union to each have their own identity, yet “feel part of a larger whole.” Thanks to several sustainable features, both buildings are expected to achieve LEED Gold certification.

With Cascade Campus surrounded by a bustling urban neighborhood, space for improvements and growth doesn’t come easily. But with the first phase of bond-funded improvements now complete, the existing space on campus is more efficient, productive – and enjoyable – than ever. And the Cascade community is relishing the results.

“We’ve certainly seen the satisfaction of the students,” said Rebecca Ocken, bond project manager at Cascade. “They are excited about having classes in the academic building, and student leaders are thoroughly enjoying their new space in the Student Union. “

PCC is investing nearly $58 million from the bond to add new buildings and make other improvements to the 23,000-student campus. The goal is to expand and upgrade, as well as encourage the vitality of the historic Killingsworth commercial district.

Phase I was the construction of Student Union and Cascade Hall, as well as an underground parking facility, PCC’s first. The two buildings sit on opposite sides of the new outdoor plaza that extends the campus mall toward the west. Both buildings are three stories tall and distinguished by clean, modern lines, large windows, and generous use of natural wood.

There was an extensive early engagement effort that included the surrounding residential and commercial community, faculty, staff and students throughout the planning and envisioning process and then into the design phase and beyond, said Gina Whitehill-Baziuk , bond stakeholder engagement and public involvement manager.  As was the desire expressed by these constituencies, the site was developed so that the surrounding communities and the college were more integrated in both form and function. The buildings were designed to each have their own singular identity but also to “feel part of a larger whole,” said Nick Hodges, senior associate with THA Architecture.

The interiors of Student Union and Cascade Hall feel light and open, even on gray days. The striking light fixtures, which serve as key focal points, are large, elegant white spheres of graduating sizes that seem to float in the airy space.

“A big design driver was the intent to ‘blur the boundaries’ between indoors and outdoors,” said Hodges. “For example, when you are in the new Student Union lounge, you still have a strong visual connection with the plaza and Cascade Hall. Another example is the large sliding glass wall that allows the Student Union lobby to open to the plaza creating a larger ‘living room’ for special events.” 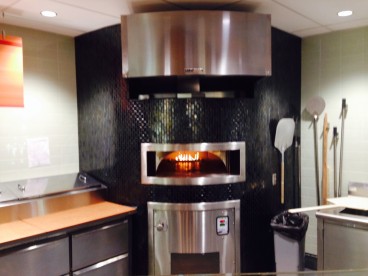 The dining facilities in Cascade’s new Student Union include a gleaming pizza oven.

The 36,000-square-foot Student Union has given the College its first true student union, meaning that it houses only student services, and no academic or administrative activity.

It replaces an outdated, 1970s-era structure that was the oldest building on campus, and one that had deferred maintenance of about $4 million, said Ocken. Although the building was slated for improvements during the last bond, cost overruns prevented the work. So for the 2008 bond, a new building was a priority.

“The (old) building had an outdated infrastructure and it was difficult to keep it running given the equipment we had to use,” she said. “Our student union was down in the basement and it was unacceptable for what they were trying to do. They had very little space … and it was hindering their program implementation.”

In the new building, the campus’ three main resource centers – serving women, and multicultural, and international students – occupy the top floor. It is the first time in the campus’ history that the three centers have been housed under the same roof.

The Student Union also contains student clubs and government offices, a study/lounge area, and flexible meeting space, as well as food service and dining facilities. The kitchen was updated to serve a wider variety of menu items — including adding a dedicated pizza oven.

Classrooms for all ages

Across the plaza, Cascade Hall, the new academic building, has been open since the start of fall term and already feels like home to a diverse group of staff, students – and young children.

Tenants of the offices include the Teaching Learning Center, which promotes professional development, personal enrichment and community engagement for faculty, staff and administrators. Here too is the Portland Teachers Program, which prepares teachers for a special focus on closing the achievement gap for children of color and underprivileged white children.

Another office houses the Center for Careers in Education, a new program that supports students who are pursuing a career in teaching, paraeducation or library sciences, and provides outreach to K-12 school districts. Director Gabe Hunter-Bernstein said the generous space is an ideal environment for the center’s work.

“It is wonderful that the College now has a physical space to provide resources for students who are interested in working in the field of education,” he said. “Research shows that up to 5 percent of students at any given community college are interested in becoming teachers. That is a few thousand students at PCC.” 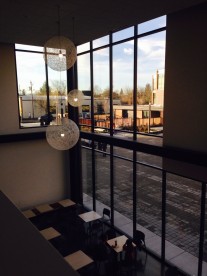 The dramatic, airy mood inside Cascade’s Student Union is achieved in part by its generous windows and open spaces.

Both buildings were designed by THA Architecture and built by Hoffman Construction working with Pacificmark Construction, a state-certified minority- and women-owned, emerging small business (MWESB).

According to THA, Student Union is 60 percent more energy efficient, and Cascade Hall more than 73 percent energy efficient, when compared to the national average for their building type. Both buildings are expected to achieve LEED Gold certification thanks to several sustainable features, such as:

The college has also made a commitment to the surrounding neighborhood to reduce college-related parking on local streets, so the new underground parking facility will help meet that commitment while saving space above ground for future campus development within existing boundaries.

x by Melissa Pyle 5 years ago

Where could I get more information about Cascade Hall and the Student Union buildings becoming LEED certified?

x by Katherine Miller 5 years ago

Melissa, I spoke with Rebecca Ocken, project manager at the Cascade Campus, and here is her reply: “Our application is now under consideration with LEED. We are seeking LEED Gold status for both buildings. I’m not sure how long it will take for LEED to review and award, but we will certainly post the determination on the web site when it is received.”

Hope this answers your question!