This content was published: July 21, 2014. Phone numbers, email addresses, and other information may have changed.

Sara Seely honored for her dedication to Rock Creek community

Sara Seely once worked at the Central European University Library in Budapest, Hungary where she helped to oversee the Open Society Archives. But her most memorable work of her career may have come from her continuing experience as a PCC librarian for the Rock Creek Campus Library.

A dedication to the community and student learning has earned Seely the 2014 Bill Christopher Building Community Award. Her name will be added to a plaque on display in Building 7 along with past winners. She will be awarded $300 to be used toward professional development, work materials and supplies, professional travel, or related applications. 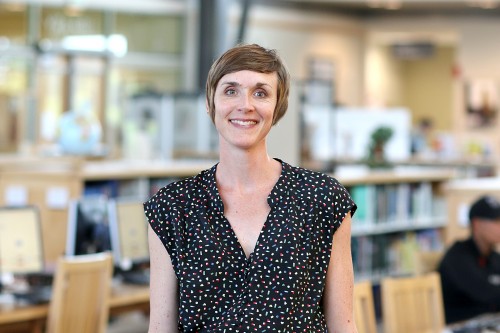 At Rock Creek’s Library, Seely spends one-on-one time with students to assist with their research through the help desk or online chats via the PCC Library website.

The annual honor is designed to help celebrate an outstanding Rock Creek employee who seeks to improve the PCC community by building connections with employees and students. The Bill Christopher Building Community Award was created in honor of the past executive dean’s contribution to the campus community at Rock Creek when he led the campus (before the role was converted to president). Recipients are nominated by their colleagues, and the winner is announced during the campus’ service awards every May. Past winners include Terry Lookabill, Debbie Tyner, Paul Halloran, Aaron Dunn, Bob Frasco, Jim Johnstone, Bob Cook, Brenda Ivelisse, Christine Paull, Pam Kessinger, Linda Timmins and Charlene Hansen.

“I was completely surprised and humbled because this is the third college I’ve worked at, and I’ve found that building relationships here comes so easily college wide,” Seely said. “I feel like I could pick up the phone, call anyone and get a response. With the focus on students, teaching, and student achievement and success, I think that breaks down a lot of barriers.”

At Rock Creek’s Library, Seely spends one-on-one time with students to assist with their research through the help desk or online chats via the PCC Library website. She also teaches, leads workshops and collaborates with other faculty to support assignments. Seely serves as a liaison for the sociology and microelectronics technology programs where she buys materials and textbooks. In addition, she assesses how students use sources and identify gaps. For example, in a recent Writing 121 class, students were given sources and asked to write a paper on why they selected the one they did.

Everything she does is geared toward enhancing the student’s educational experience.

“If you show up and if you engage, work gets done, and things happen and I feel people here really do that,” Seely said. “I’ve learned a lot about the community and relationships since I’ve arrived at Rock Creek. I’ve learned so much the last three years watching other people work.”

On top of all this hard work, Seely has served on planning committees for the New Faculty Institute, International Education Week and PCC Reads, to name a few. The awardee even finds time to represent PCC on a bigger scale as well, working with a consortium of 37 Northwest college and university libraries to buy books collectively. However, her fondest activity to date has been helping to open the new PCC Library at the Southeast Center where she led the collection development effort. Seely said it was a rare chance for her to assist in the building of a library from scratch.

“When the doors open, you have to think about what books you put on the shelves and how you are going to do that,” Seely said. “That is a once-in-a-career opportunity. I don’t know when I would ever be able to open a library again. It has been so much fun and it’s such a privilege.”

x by Monica Marlo 7 years ago

x by Joshua Andersen 7 years ago

x by dorothy payton 7 years ago

Thanks Sara for being such a bright light to the entire PCC Community.

x by Xochitl Ramirez 7 years ago

I’m so happy for you Sara congratulations.

x by Kevin Moore 7 years ago

Fantastic! You certainly deserve it.

x by Alp Goldsmith 7 years ago

Nice going Sara. I can now say that I had her as a teacher before she became famous. –Alp

x by Priya Boopathi 7 years ago

I am in F2 Visa.I have come from INDIA.I have completed B.Tech in India & have 4 years of IT experience(Testing).What courses I could are offered in PCC???.I need a rough estimate of the cost & term.With F2 Visa Can i do a course?

x by Jaime Rodriguez 7 years ago

Congrats and great work your doing with assisting students.

x by Tom Bolling 7 years ago

Sara!! How fantastic!! Heartiest congratulations, with immense love and admiration!!

x by Ernie Jones 7 years ago

Wow! Why am I not surprised?! And she does it all with a smile that you can tell comes from the heart. PCC is very lucky to have her. Congrats Sara!

x by E KNight 7 years ago