This content was published: July 14, 2014. Phone numbers, email addresses, and other information may have changed.

It’s no secret that health disparities exist in the United States. Diabetes, heart disease, asthma and many more chronic conditions appear at disproportionately high levels among some communities as compared to the population as a whole.

What’s less known is that similar disparities exist with regard to underrepresentation among the ranks of biomedical, behavioral and health science researchers who fight these conditions by seeking to identify their causes and solutions. Thanks to the Portland Bridges to Baccalaureate Program, a partnership between Portland Community College and Portland State University funded by the National Institutes of Health, more students from underrepresented populations are being recruited into the biomedical, behavioral, and health sciences, where they can put their skills to work addressing the health disparities that disproportionally beset poor, racial and ethnic minority communities. 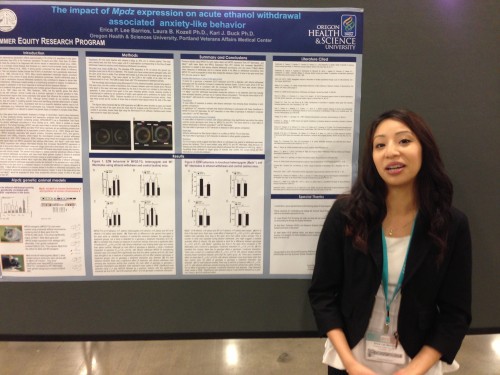 “Certain minority groups and other underserved communities are underrepresented in the scientific research work force of the United States,” said Shari Rochelle, director of the Bridges Program at PCC. “The Bridges to Baccalaureate Program recruits PCC students from these underrepresented groups and supports them on the way to degree completion.”

PCC is one of about 50 institutions nationwide to offer a Bridges to Baccalaureate Program. It maintains Bridges coordinators at three PCC campuses – Sylvania, Rock Creek and Cascade, where Rochelle is based and where many of her students get started on the path towards a bachelor’s degree. Bridges coordinators support students in the program by providing one-on-one support in mapping out educational pathways and through connecting students with campus-based student support services. Coordinators also offer Bridges colloquium workshops to help students develop their academic, interpersonal, and college success skills in preparation for paid PSU summer research internships where interns work directly with a PSU science mentor in their chosen field of study.

The program also supports Bridges interns to present their research nationally where they compete against other students from around the country. Coordinators also organize the district-wide Bridges to Baccalaureate Seminar Series to acquaint PCC students, faculty and staff with local researchers and to increase awareness of the diversity of research going on in these fields.

One of the features that makes the Bridges to Baccalaureate Program unique is that its students are co-enrolled at PCC and PSU. This allows students greater flexibility and choice by combining the best course offerings and student support resources of both institutions. Co-enrollment also provides for a seamless transition to PSU when students are ready to move on from PCC, Rochelle said.

“The Bridges program has helped me profoundly,” said Bridges student Kalera Stratton, who is pursuing a psychology transfer degree at PSU. “It has helped to turn what was once just a dream of pursuing a Ph.D. into what feels like an attainable, concrete goal.” 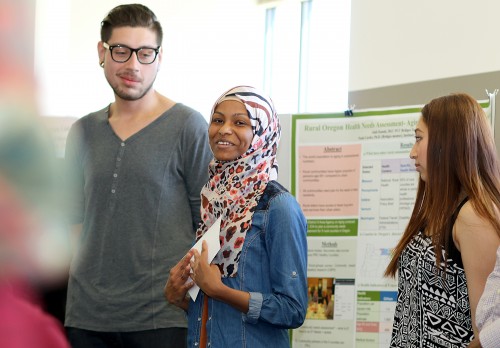 In addition, Kalera just received a Ford scholarship. She said feels the support she received from Bridges was instrumental in receiving this award.

Abdi Hamid has been studying public health at PSU since the fall of 2012. An immigrant from Ethiopia, he credits the Bridges program with helping him to realize a lifelong dream.

“I always dreamed about our world free of diseases, wars and poverty; about a better tomorrow where I can be an important contributor,” he said. “The Bridges program gave me an opportunity to meet with health care professionals, scientists, instructors, and grad students who are in my field.”

Kalera and Abdi have been selected as Bridges student peer mentors this summer with the 2014 interns.

In addition to their regular coursework, students are eligible to apply for one of 15 paid summer internships at PSU where they conduct research alongside PSU faculty. Each student is paired with a PCC faculty research mentor in a particular field of study – biology, chemistry, psychology, etc. They also get something that’s on the mind of college students everywhere: a paycheck. And even better, they get to develop a relationship with an experienced research professional.

“The internship introduced me to an excellent mentor, Dr. Greg Fowler, who has taken a strong interest in my education,” said biology student Rick Rollins. “With his help, I’ve secured student research positions in laboratories at OHSU. The encouragement from the Bridges program and Dr. Fowler has helped me to move beyond thinking that I may not be quite as capable, being a non-traditional student, and it’s pushed me to higher aspirations than those with which I entered PCC.”

Ideally, Rochelle said, a Bridges student’s internship falls between their sophomore and junior years of college, as they are transitioning between PCC and PSU. Depending on a student’s interests, though, and the particular internship opportunities that are available at a given time, he or she might do it earlier.

“They get to spend the summer in the lab or in the field and it’s not just ‘bench’ research,” Rochelle said. “They work closely with faculty doing pretty sophisticated work.”

Over the course of the internship, each student intern creates a poster detailing his or her research project, and presents it at the PSU Bridges Research Symposium at the end of the summer. The posters function both as a document of each student’s project, Rochelle said, as well as a good way to practice the sort of analysis, communication, and research presentation skills that will be required of them on the job.

Students who do a particularly good job on their posters can apply to present them at the Annual Biomedical Research Conference for Minority Students, a yearly conference where aspiring student researchers from around the county present their research, complete for cash prizes and hope to catch the eye of college professors and recruiters seeking potential students for their programs.

The obvious benefits aside (more underrepresented students are finding solid careers in the sciences) Bridges often has a more subtle, but incredibly profound, impact on its students, Rochelle said. Many Bridges students are the first members of their families to attend college and, as such, perhaps believed college wasn’t in the cards for them. But then they find themselves in a program that not only helps steer them into a rewarding career, but supports them and helps them to succeed along the way. Suddenly the dream is within reach, and the effect is nothing less than transformative.

“The best thing about being part of Bridges is the support, being part of a cohort, and having a support system of people who don’t simply believe, but know, that my higher education goals are achievable, and who will support me in reaching them,” said Stratton. “I really can’t express how helpful and inspiring the program and the people in it have been to me. Just knowing I have their support is so significant.”

x by billy.farrar 7 years ago

is this program just for minorities, or can anyone get support from P.S.U? just asking

x by Narce Rodriguez 7 years ago

Erica, so proud of you!

x by Roran Hatfield 7 years ago

As someone who never thought I would go to college and then found I was a successful student training to be a medical assistant, I am very interested in this program. My goal for starting down the path of a 4yr degree is to become a healthcare provider & social justice wizard. I know there isn’t a degree for that, but I feel pretty passionate about social Justice and healthcare. I would like to learn more about this program. Please let me know how I can do that.
Thank you