This content was published: March 26, 2014. Phone numbers, email addresses, and other information may have changed.

Photos and Story by Stephan Herrera 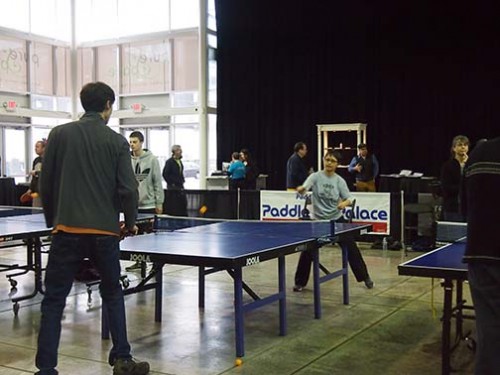 Some competitors in action at Pure Pong in Northwest Portland.

Roger Frank was a psychologist who helped many with his kindness, competence, generosity, spirit, and friendliness. Due to a spinal cord injury, Frank worked and lived from his wheelchair. One of his pleasures was playing Ping-Pong with family and friends. In 2012, Roger passed away unexpectedly. After his death many staff, students, and community members contributed gifts to start a scholarship and sponsor a Ping-Pong tournament in his name.

“Roger Frank loved helping students and was an avid ping pong player and enthusiast,” said Catherine Sills, a PCC counselor and instructor. “This event was a huge success and we look forward to honoring Roger and supporting students for years to come.”

If you were not able to attend this event and would like to support it, please visit the First Annual Roger Frank Memorial Ping-Pong Tournament ​page and click the “donate” link. All donations are t​ax deductible and will benefit the lives of students at PCC.​

x by Jordan Ritchie 6 years ago

This was a great event. Although I was quickly eliminated in the tournament I enjoyed watching others and some were highly skilled. I am looking forward to next years event!

want to join in