This content was published: January 14, 2014. Phone numbers, email addresses, and other information may have changed.

PCC Asian New Year ushers in year of the horse

Portland Community College’s Southeast Center is ushering in the “Year of the Horse” in style.

The 12th Annual Asian New Year Celebration will be packed with dance, live music and martial art performances as well as vendors, Chinese calligraphy bookmarkers, raffle prizes, face-painting and much more for the whole family. The celebration, which will include lunch, is from 11:30 a.m. to 2 p.m., Monday, Feb. 17, in the McGuire Auditorium, Warner Pacific College (2219 S.E. 68th Ave.). 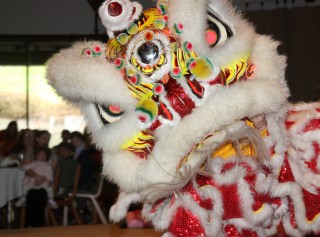 Festivities will begin with a traditional lion dance by the NW Learning Studio dance group followed by live martial arts, dances and music performances that represent countries across the Asian continent.

Tickets are $4 for general admission, $2 for PCC students and free for children under the age of 8. Parking is also free at Warner Pacific and PCC’s Southeast Center (2305 S.E. 82nd Ave.). The college will provide a free shuttle between locations from 11:15 a.m. to 2:15 p.m.

Festivities will begin with a traditional lion dance by the NW Learning Studio dance group followed by live martial arts, dances and music performances that represent countries across the Asian continent. In addition, the Associated Students of PCC (the college’s student government organization) is sponsoring a free International Market from 10 a.m. to 2 p.m., Tuesday, Feb. 11, in the Great Hall, Southeast Center. The event will feature a “Showcase of Cultures” presented by PCC students and vendors, along with samples of food from Asian countries.

Every February since 2002, PCC students and staff have worked together to organize the Asian New Year Celebration to highlight the rich cultural diversity of the people living and working in Southeast Portland. The celebration honors the communities in Southeast Portland that represent more than 45 different Asian countries, from the Middle East to India to Southeast Asia.

For more information, contact Josh Peters-McBride by e-mail at joshua.petersmcbride@pcc.edu, or call (971) 722-6328.

x by Anonymous 8 years ago

How can you refer to the Chinese New Year as “Asian New Year”?

Japan is in Asia, and they use the Japanese and Gregorian calendars.

Israel is in Asia, and they use the Hebrew calendar.

India is in Asia, and they use the Saka calendar.

In my opinion, it is racist to lump all Asian cultures together and imply that they are all the same.

x by Preston Tracey 8 years ago

Similar complaints were raised by one individual over the prior celebration , and the decision was apparently made to retain the original title. The Chinese New Year is celebrated in many countries all over the world, and this particular celebration involves many individuals from differing Asian backgrounds; thus, semantics aside, the terminology indeed describes the occasion.

x by Anonymous 8 years ago

The explanation of, “There are people throughout the region who believe in this, so it must represent the whole region” makes no sense and is the definition of a stereotype. There are Klansmen in areas throughout the United States – so I guess PCC should celebrate lynching and call it “America Day.”

I’m really disappointed at how often PCC pats itself on the back for being “multicultural” while still posting overt racism on the front page.

x by Van Tran from PCC 8 years ago

“Luna New year” because it’s base on the moon.
A lunar calendar is a calendar that is based on cycles of the lunar phases. Because there are slightly more than twelve lunations (synodic months) in a solar year, the period of 12 lunar months (354.37 days) is sometimes referred to as a lunar year.

A common purely lunar calendar is the Islamic calendar or Hijri Qamari calendar. A feature of the Islamic calendar is that a year is always 12 months, so the months are not linked with the seasons and drift each solar year by 11 to 12 days. It comes back to the position it had in relation to the solar year approximately every 33 Islamic years. It is used mainly for religious purposes, but in Saudi Arabia it is the official calendar. Other lunar calendars often include extra months added occasionally to synchronize it with the solar calendar.

The oldest known lunar calendar was found in Scotland; it dates back to around 10000 BP.[1]

x by Seth 8 years ago

“…so I guess PCC should celebrate lynching and call it “America Day.”
Well, that escalated quickly!

Seriously, that is a really poor comparison and I think you know it. This festival is not celebrating a violent, or racist act – quite the opposite. Don’t smear the festival, just because you don’t like the name. If you take such exception to what it is called, you should contact the committee directly and offer to get involved. Maybe then, you’ll learn what a great event this is and why they continue to call it Asian New Year.

x by Anonymous! 8 years ago

x by Johna 8 years ago

I really like volunteering for this event every year, and looking forward to do it again this year. The students and staff who put this event together do a excellent job, both at PCC and Warner Pacific College. Looking forward to see you on Feb. 22, 2014.

x by Janet 8 years ago

Calling it “Asian New Year” is misleading to people who do not know much about different cultures and traditions. If they want to educate or inform others about Chinese New Year, they should just call it that.

x by Michael P 8 years ago

They should just call it the “LUNAR NEW YEAR” since it correlates with the lunar calendar.