This content was published: December 1, 2013. Phone numbers, email addresses, and other information may have changed.

Construction careers come to life for students at Cascade Campus

On a sunny fall day in October, seventeen students in PCC’s Trades Preparation course moved the class outdoors to tour the construction site at Cascade Campus. Dwight Page, the PCC class instructor coordinated the tour with the PCC Bond Program and Hoffman Construction,  the construction manager/general contractor for bond improvements at Cascade, so his students could see the construction trades in action. 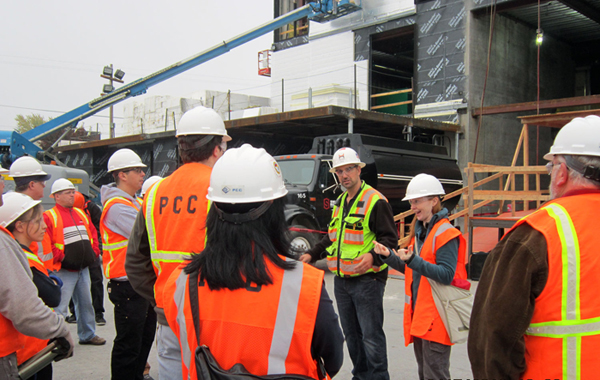 Jacob McKay, Site Superintendent with Hoffman Construction gives the group a general outline of the site.

Jacob McKay, the Project Superintendent and Derrick Beneville, the Project Manager, both with Hoffman Construction, told students about the history of the site, explained what was being built and led the tour. Thanks to McKay and Beneville, the tour highlight for the students was having five people from different trades share their personal and professional experiences. Each one – an iron worker, a carpenter, a plumber, a glazer and an electrician – discussed their backgrounds, how they had first entered the trades as an apprentice and described what a regular day was like on the construction site.

“Being an iron worker is a very physically demanding job, especially as an apprentice,” shared Fenton Mayes, the structural iron worker.  Several students nodded their heads when Mayes said, “for me, I was never one to have desk job. I always say ‘we build the office – we don’t go to it.'”

In response to a question about women and age in the iron worker trade, Mayes explained that, “there are a lot of women in the trades and often they become welders. Age doesn’t matter. It’s definitely a very equal opportunity trade. For example, my company has a 35 pound weight limit for lifting. Any heavier, you have to find a mechanical solution. That rule applies to men and women, and regardless of age.”

Brent Charbonneau, a plumber and project foreman with HydroTemp is a subcontractor on site. He told students that he started out as a sheet metal apprentice, and switched over to plumbing and HVAC. When asked what he liked about his job, he said, “working in a living, changing environment, taking a design concept and turning it into reality is what I like best about what I do.” 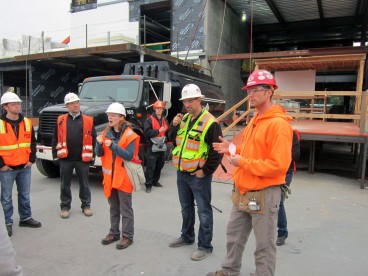 Pete Anderson, an electrician on site, told students that he started as an apprentice four and half years ago.

The electrician, Pete Anderson, explained that he had entered the trades directly after his service in the U.S. Marines where he was trained as an aviation electrician. Anderson underscored the importance of math in the trades. “You need at least high school algebra to start in the trades. They taught us trigonometry while I was an apprentice. I think the instructors in the trades are the best math teachers around.”

Beneville echoed Anderson’s comments with the students. “We can’t stress it enough. For any of these guys, math is a big part of these trades.”

Following the tour, many of the students traded business cards with McKay and Beneville, and talked about the importance of having exposure to these types of in-the-field opportunities.

“As a minority and Hispanic man, the bond work at Cascade, this tour and the class create a tremendous opportunity for us – to come out onto the construction site and talk to these people who are already in the trades,” said Rudy Martinez, one of the students.

Tracy Cooper, one of two women in the class said, “I never had any exposure to these fields. I wish I had had these opportunities to go into the trades in the 1980s when I first went to college. I heard that PCC’s pre-apprenticeship program was a good one. I am a voter in this community and I knew PCC was building this amazing campus. I told myself – I want to be there!” Photos taken by Todd Mallette, PCC student and intern with Hoffman Construction.

Check out this video to hear what the apprentices have to say about their experience on the construction site.