This content was published: September 23, 2013. Phone numbers, email addresses, and other information may have changed.

After a whirlwind tour of Portland Community College and the communities it serves, Jeremy Brown is ready to tackle his first academic year as college president.

Since he’s taken over on July 1, Brown has been listening. He started with his “Tour de PCC” where he rode on a PCC Shuttle to 10 locations across the district in one day to meet staff, faculty and students. From there he’s attended meet-and-greets and many big Portland events like the Safeway Blues Fest at Waterfront Park (he introduced rock legend and fellow Brit Eric Burdon) and threw out the first pitch at a Hillsboro Hops home game, to name a few. 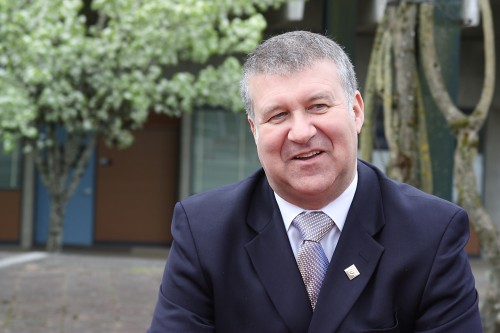 Since he’s taken over on July 1, Jeremy Brown has been listening to staff, faculty, students and the community. He’s had a “Tour de PCC,” attended meet-and-greets and participated in many big Portland events.

“‘Tour de PCC’ enabled me to better understand the depth and breadth of PCC’s district, how diverse the college is, and the many different communities it serves,” Brown said. “Subsequent longer visits to the campuses and centers over the summer have given me even better snapshots of PCC’s programs and culture, student backgrounds and experiences. Also, I’ve learned more about the community at large this summer by attending or participating in a variety of festivals, community events and meeting community leaders, mayors, and elected officials as part of them.”

Brown plans to keep the line of communication open with everyone by holding regular monthly meetings with staff, have regular office hours, routinely visit all PCC sites and encourage people to email him questions at president@pcc.edu.

There’s lots to do for PCC’s sixth president. The college is becoming more important in the higher education process as a greater number of students choose to start at PCC instead of universities. For example, 40 percent of Portland State University graduates started at PCC. In 2011-12, approximately 7,100 students transferred from the college to a Oregon university – up from 4,800 in 2007-08. And despite dramatic increases in enrollment over the past several years, PCC’s share of money from the state is second to last among the 17 community colleges in support per community college student.

In addition, community colleges are under the microscope with increased accountability required, such as completion goals with Oregon’s “40-40-20” Initiative and President Barack Obama’s emphasis on awarding degrees. Although state funding has declined to 30 percent of the college budget (from 45 percent in 2006-07), PCC is doing more with less. PCC is already producing innovative, life-changing programs like the Middle College and Future Connect programs, which both help at-risk students succeed and graduate. 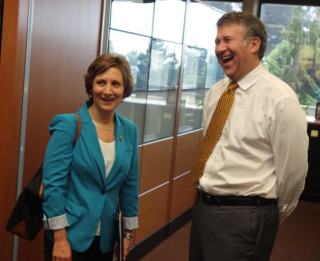 Brown has met with several local leaders such as Congresswoman Suzanne Bonamici.

“Our people at PCC are our greatest assets,” Brown said. “The creativity of the staff and faculty shines through regularly – they know how to do more with fewer resources. One of the opportunities of changing leadership is identifying what’s working really well, keeping those elements in place and identifying opportunities for growth. We can’t rely on state funds any longer. We need to grow sources of funding that we generate for ourselves. Also important is that we maintain a strong sense of service to students and our core values, and maintain a ‘small feel’ as we grow and expand as a college.”

The college is entering into a time of strategic planning to meet goals for its accreditation coming up in the fall of 2014. The strategic planning process will set direction and priorities, build on successful foundations, align the college budget with these priorities and initiatives, and combat resource challenges. The strategic plan will be reviewed and updated annually, developed to cover all elements of operation, have five-year goals and annual quantifiable objectives. A steering committee will be formed to review the mission, vision and values, as well as institutional goals and objectives.

As the college goes forward, this planning will position the college as a leader in Oregon. To achieve this, Brown said, the college will work more closely with businesses, expand external funding sources, be active in state higher education discussions with PCC taking a lead role, research national case studies and find aspirational peers.

“This is ultimately being done to serve our students better,” Brown said. “Strategic planning sets the direction and priorities for an exciting future, and creates a road map for the college.”

[…] Monday, Sept. 23 was the first day of the new academic year at PCC. Parking was at a premium, but well-placed welcome stations and the business office seemed to be handling the crowds at all the campuses pretty well. Watch here for more photos throughout the week as we take a look at what’s happening during the first week of the new school year. Our army of intrepid photographers are scouring the campuses to deliver even more pictures of the college’s biggest week. Also, interested in what our new college president has to say about future goals and the direction of the college? Check out our feature on Jeremy Brown! […]

x by Christopher Bergs 7 years ago

I have grave concerns about the ongoing(4 semesters) of disorders concerning PCC “programing” guys.

Specifically: The current Information Technology Department on many occasions has failed to be user friendly Or worse.

Example 1: Since the semester began I haven’t been able to utilize the printer credits “WE” paid for! Printer programs (shut off)? How to know…The librarians are apologetic.

Example 2: My first semester I had to file a complaint; because to access “Word” it required the user to type it in literally type WORD enter. WHY? The icon was returned……

Example 3: Why does printing a document require 3 passwords. We are not working at the oval office.

My hope is that in your tenure, you will find time to bring back common sense. Or hire people who do….

x by Liz Ryan 6 years ago

Dr. Brown,
Here at WCC, we have a huge space on the 3rd floor that is not built out. Instead of doing all the new building at various sites, or leasing other non-PCC buildings/office space, why isn’t this space utilized?

It is my understanding, PCC owns other various sites throughout the city and surrounding area that are not being used. Seems like a waste of money not to take advantage of what PCC already owns.
Thank you.

x by Jon Kinzer 6 years ago

Online classes have been experiencing rapid growth. However, the quality among the offered courses are varied and seemingly unsupervised.

During this semester I am enrolled in an accounting class that has moved the class from Desire2Learn to a third party website (McGraw Hill Connect). The professor does nothing. Homework, lectures, tests, quizzes and grades is all on the third party website. Zero content is provided by the instructor.

What’s more, in the past, professors take vacations during the semester or are full time professors at other universities. Obviously, PCC comes a distant second in correcting papers or answering students questions.

I hope you can bring some consistency as well as quality control to this fast growing segment of PCC. Unfortunately online classes cannot be visited or have their photo taken.

Dr. Brown,
I can appreciate the concerns about online education. As with any instructional method, there are benchmark institutions setting the standard for excellence and other programs with notable improvement opportunities.

I believe PCC has an opportunity to create a benchmark in online education using strategic planning including focused process improvement. Practice continuous improvement.

x by Burke Thornburg 6 years ago

This ship’s direction could be enhanced through the science(s)with the inclusion of curriculum favorable to “Intelligent Design” models.
PCC’s focus during our Cascade In-service, was asking to get involved in a conversation about Race-ism. Part of the issue of “White Superiority” as Algie Gatewood mentioned, in my learning is a result of “Darwinian” models to Human Evolution, which set a foundation for this. Regards/Thoughts