This content was published: March 15, 2013. Phone numbers, email addresses, and other information may have changed.

On April 13, Tualatin Riverkeepers will present their Green Heron Award to instructor April Ann Fong for her significant contributions to protecting and restoring Oregon’s Tualatin River System in a ceremony at the Tualatin Country Club. Fong teaches Biology and Environmental Studies at the Sylvania Campus and was selected as the Outstanding Teacher in Science and Mathematics in Higher Education by the Oregon Academy of Science in 2008. 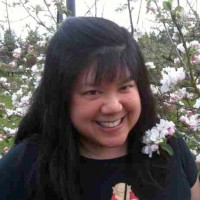 One of April’s biggest achievements has been establishing the Sylvania Habitat Restoration Team in 1996, where students and staff volunteer to improve the ecosystems on and surrounding the campus. The team works with the Grounds Department on many projects, such as the Sylvania Learning Garden, the Wildflower Display Garden, and others.

Thanks to grants from the Portland Bureau of Environmental Services, her students have also worked at Sylvania Natural Area Park. At the 2.7-acre park, which contains a Douglas fir forest, students got to help manage the biodiversity of the area through decisions regarding what plants stay and which types to buy and plant under the guidance of Portland Parks & Recreation staff. For its hard work, the team earned a 2012-2013 Community Watershed Stewardship Program grant through the Bureau of Environmental Services.

In addition, Fong was instrumental in establishing Sylvania Campus’ Green Team, where students and staff who help improve sustainability at the campus. Some of the team’s work includes an annual waste audit, improving recycling, supporting PCC’s shuttle fleet to operate on bio-fuels and spearheading the hiring of a full-time campus sustainability coordinator.

“April has earned the respect and admiration of her students who find her to be a great source of inspiration,” stated the Riverkeepers’ press release. “We were inspired by her, too, and are pleased to present her a Green Heron Award in honor of her dedication to the sustainability and health of the Tualatin River watershed.”

x by Linda Browning 7 years ago

Congratulations, April! It is nice to see you honored for your work.

Thank you, Linda! :D I feel very honored and am still a bit stunned!

Congratulations April! =) I just happen to be browsing pcc.edu and saw your name. I’m excited for ya. You’re are an instructor with great heart and lots to share. Let’s reconnect soon.

Thanks, Huan! :D So nice to hear from you. Hope all is well!

x by Lucy Solar 7 years ago

Way to go April! You deserve this recognition and more, for all your work to preserve many natural areas and for teaching your students about why this is important. I’m happy for you!

x by Wayne Owen 6 years ago

April – you were always a hero to me!

(blush) Thanks, Wayne! You’re one of my flower heroes! I miss the Lingua Botanica!