This content was published: January 2, 2013. Phone numbers, email addresses, and other information may have changed. 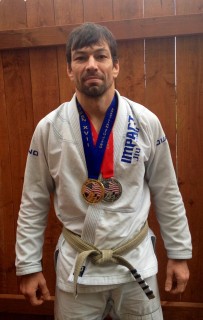 Richard Rangel, a part-time instructor in Sylvania’s physical education department, proudly displays his gold and silver medals from the recent Brazilian Jiu-Jitsu U.S. Open tournament. In addition to teaching mixed martial arts at the college, he travels throughout the world to compete in Jiu-Jitsu competitions.

Rangel – a brown belt master who graduated from PCC’s fitness technology program and now competes locally, nationally and internationally – is a member of the Beaverton-based Impact Jiu-Jitsu Academy. He and 15 academy teammates traveled south to participate in the competition, where Rangel placed first in the light weight division (154-168 pounds). He lost in the finals but took second place in the absolute weight division.

“Our department is so proud of Richard and his accomplishments,” said Moe O’Connor, faculty chair of the Sylvania Campus physical education and fitness technology program. “And the fact that he’s one of our graduates, too, makes news of his honors and awards extra special.”

x by Scott judy 8 years ago

Richard, Great Job! All of your instructors in the PCC welding shop are proud of your accomplishment. Congratulations!