This content was published: January 15, 2013. Phone numbers, email addresses, and other information may have changed.

Melissa Gregory Rue is a filmmaker with a cause and many awards. 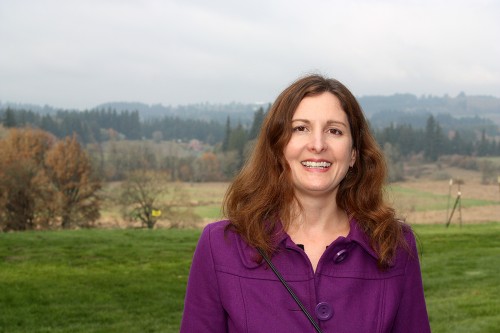 Melissa Gregory Rue directed and produced the short documentary that follows the Gates, a fourth generation farming family in Helvetia, Washington County whose way of life is threatened by encroaching urban development.

She directed and produced the short documentary that follows the Gates, a fourth generation farming family in Helvetia, Washington County whose way of life is threatened by encroaching urban development. The parents confront the possibility that their children may be the last to know of their family’s connection to the land. Last fall, The Oregonian highlighted Rue’s film, which she produced as her final project for the certificate program at The Northwest Film Center.

“I felt really great about it,” Rue said. “I was excited about the response at that first screening.”

The screening and subsequent positive reactions were the result of a lot of hard work. She started filmmaking classes at the Northwest Film Center in 2003. She balanced making short films and teaching online writing and literature courses at PCC.

Two years ago, Rue had heard about what was going on in Helvetia and decided to make a short film dramatizing the issues through the eyes of kids. But after her first trip scouting locations, the fictional story dissipated and a non-fiction documentary emerged.

“It was so serendipitous,” said Rue, who directs, produces, edits and promotes her films. “The very first farm that I stopped at was the Gates’ farm. It was this completely picturesque setting with snow capped foothills in the background and absolutely beautiful textures and colors everywhere. I just fell in love with it.

“I did not begin with the idea that I was going to do a documentary,” she added. “And it turned out to be a really good thing. I started doing test shoots and got to know (the Gates). They got comfortable talking with me about their land and I got more insight personally into what they were going through as they wondered about the future of that area.”

It was a perfect project for Rue. She grew up on a farm in Kentucky and after leaving to establish her teaching career in Oregon, she returned later to find an erosion of historic farmland. Seeing her childhood area change so dramatically struck a chord with her when Helvetia began battling encroachment issues from Portland and its suburbs. 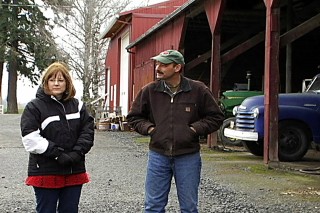 Pam and Spencer Gates in the film, ‘Century Farm.’

“My interest goes way back,” said Rue. “I know a lot of the politics. I watched it play out and know many of the farmers that have been affected there (in Kentucky). It’s a worldwide issue on how to balance these issues. I wasn’t trying to get into an argument so much as to simply reflect what is at stake for people’s personal identities, their connections to the land and their history. It’s a big and complex question.”

“Century Farm” is just one of many short films that Rue, who recently earned her certificate in filmmaking from The Northwest Film Center, has made. Her latest film, “The Land Between,” was inspired by the many returning war veterans she’s taught over the years who are struggling with post-traumatic stress disorder. The piece is a short narrative about a young girl who attempts to help an Iraq veteran emerge from the nightmare of war. Rue is submitting it to festivals and hopes to premiere it in Portland this spring.

And she is back to shooting a new documentary. It follows a small group of people who are currently or formerly homeless as they learn to make films with the help of artists-in-residence at Bud Clark Commons. She’s hoping to seek major distribution for the project when it’s completed.

“The film explores the power art has to create community, to empower, and to heal,” she said.

“We’re extremely fortunate with the diversity, talent and creativity of our students at PCC,” she said. “It is a wonderful place to teach.”

x by Usha Ramanujam 8 years ago

x by E Knight 8 years ago

That is terribly terrific!!! So happy for you!

x by bryan hull 8 years ago

Nice to see that you are getting a bit of recognition that you deserve for your inspiring work!

x by Dominique Lamar 8 years ago

Congratulations to Melissa!! I would love to be able to see “Century Farm” and “The Land Between.”

x by Sara Guerre 8 years ago

It’s wonderful to read about your film Melissa! I hope to hear more about you and your future projects.

x by Hilary Davis 8 years ago

Wat a great surprise to see your beautiful face on here when I logged on. Great job and congratulations on both your certificate in film, but also this great project. This is only the beginning for you!
Hilary Davis

x by Jane Goekjian 8 years ago

This is so terrific, Melissa. Congratulations!

x by Rebecca Allen 8 years ago

My sincerest congratulations on your accomplishment. Balancing your art with your outstanding teaching is no small feat. We are very lucky to have your skill and insight available to us as a teacher.

Here’s to many more achievements to come!