This content was published: September 25, 2012. Phone numbers, email addresses, and other information may have changed.

Randy Leonard’s moment of “this is what it means to be a grownup” came back in September 1969 when he was in Basic Training with the Marines Corp. His next stop after sunny San Diego – the bloody battle fields of Vietnam and everything that went along with war.

He was 17 and on his own made the decision to leave high school and join the Marines. But with torn ligaments in his ankle and a medical discharge all but certain he decided to return home to Portland and start over.

“That was such a jarring experience,” Leonard recalls. 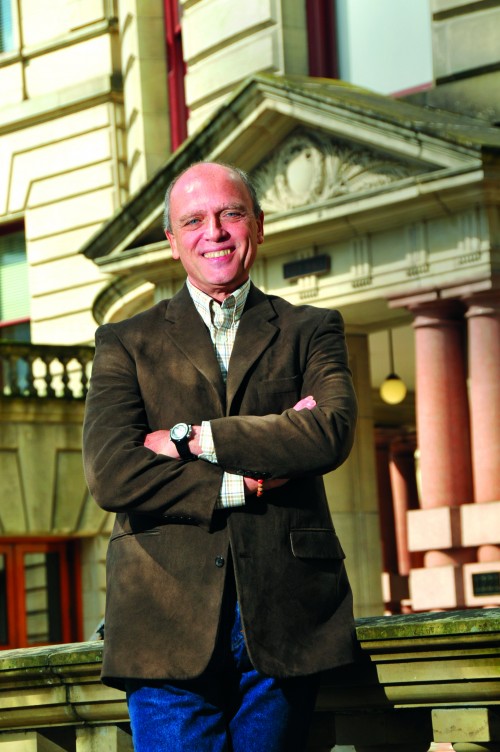 ‘It was a period of time that was the happiest of my life,’ said Leonard. ‘PCC allowed me to make up for being a poor student and allowed me to be proud of myself.’

He went back to Grant High School with a renewed effort to attend class, participate in discussions, take tests and graduate within a year. That was a far different picture from his previous school experience where he was enrolled but didn’t exactly engage. It wasn’t that he was lazy – in fact, he ran his own janitorial and maintenance business and worked long hours cleaning toilets and doing jobs no one else wanted – but he wasn’t focused on school.

“I had such little confidence back then that I was afraid to stand in front of a class and speak,” said Leonard, who’s served as a Portland City Commissioner for the last 10 years.

He kept busy during his senior year making up lost assignments and completing homework. “I appreciated everything that I had and I viewed the world differently,” he said.

After graduating he called Portland State University to see what it took to apply. The answer: With his grades, don’t bother.

He quickly turned to Portland Community College. By September 1970 he was taking classes at the Sylvania Campus and loving every minute of it.

“I thought it was pretty cool,” Leonard said. “There was a brand new radio station and a café. I enjoyed all of my classes because I wanted to be there. The college and the way it was set up definitely fit my personality.”

He lived on his own in a small apartment and would hop on his motorcycle, cruise up Interstate 5 in the rain (and often in the dark) and make it to his 7 a.m. class. He excelled in English, history and not surprising, political science. He thought law school was in his future.

“It was a period of time that was the happiest of my life,” said Leonard, who turned 60 this past summer. “PCC allowed me to make up for being a poor student and allowed me to be proud of myself.”

The native Portlander eventually went to PSU after leaving PCC where he was involved with student government, Greek life and he even made the Dean’s List.

By 1976 he was managing former State Rep. Ed Lindquist’s campaign and a year later he applied to the Portland Fire Bureau. He studied for the entrance exams for months, spending days in the library, memorizing information. “I was obsessed with getting hired,” he said.

He went on to a 25-year career with the fire bureau both as a firefighter and union president.

In early 2013 Leonard begins an unknown but hopefully happy period as he leaves his job as Portland City Commissioner. He ends a 20-year stint as an elected official, first as a state representative (1993 to 2002) followed by commissioner.

As for what lies ahead the only thing Leonard knows for sure is that his days will include plenty of time with his grandson Cole, who lives in Southwest Washington and plays a number of sports. Aside from that he has no firm plans.

His advice for college students, especially those who may be in the same situation as the younger Leonard: Go to college. Don’t make excuses about not being able to afford it because scholarships and financial aid are available. He points to Future Connect, a program spearheaded by the City of Portland and PCC that targets first-generation college students who show promise for succeeding in school but face barriers, as a prime example.

“I came from a challenging background, but I believe in surviving,” he said. “And down the road you will see the benefits of having a college education.”

x by Ryan 7 years ago

“I came from a challenging background, but I believe in surviving,” I’m sure plenty of the people Mr. Leonard forced out of business for personal gain believed in surviving, too. :)

I find Randy Leonard to be an embarrassment to the ideals of PCC. His documented history of poor relations with the people in his ‘commission’.
And on a personal note; almost going to combat is as close as he can come to a major life experience? That that is his defining experience? I expect more ‘life’ experience from someone who is going to use said experience as a point in his ‘curriculum vitae’.

x by Erica Leonard 7 years ago

I find Randy Leonard to be an ispiration to me as a student at PCC. I can appreciate that his success started from PCC and continued from there. He is a testament to how far one can go from a start at a community college. The only thing that limits us is ourselves!

x by Erica Leonard 7 years ago

For the record, I can spell inspiration!

x by Anne 7 years ago

I am glad that Randy Leonard’s words ring some sounding bells, especially to many of us who very well can relate to having been pulled out from some “challenging” backgrounds. The best is ours, if we keep our foot inside college grounds.