This content was published: September 25, 2012. Phone numbers, email addresses, and other information may have changed.

Adam Clark comes full circle thanks to Gateway to College

Adam Clark was a teenager on the wrong path. Having bounced around various high schools in the Gresham area, and after finally being expelled from Madison High School, he found himself at a crossroads.

At the age of 17, he found his way, thanks to PCC’s Gateway to College Program. Now 24, he has come full circle and earns a living providing tutoring and technical support for the program at the Southeast Center. 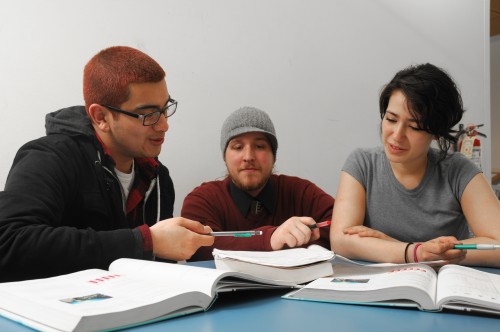 Once expelled from high school, Adam Clark (center) has come full circle and earns a living providing tutoring and technical support for the Gateway to College at the Southeast Center.

“I wouldn’t have gotten any education at all without Gateway to College,” Clark said.

After his expulsion, Clark decided that his best option was to earn his General Educational Development (GED) certificate. He enrolled in the YES Program (Youth Empowered to Succeed) — a branch of Gateway for students under 21 — and earned his GED after one term of study.

“It came as a slight surprise to me,” Clark said of his swift success. “I didn’t think of myself as a bright guy.”

GED in hand, Clark pondered his next move.

“With a GED, I knew I could get a job, but not a career,” he said. “I knew at that point that I wanted more from my life.”

A PCC resource specialist referred him to the mainstream Gateway. He was accepted into the program, received a scholarship and began his studies in 2005. The wayward kid who didn’t think much of his own abilities found that he was a thriving student.

“It’s a great program,” Clark said. “You get lots of support, lots of guidance.”

Then, with things going so well, Clark hit a snag during his second term. He ran afoul of the law, and faced incarceration. His bright future was on the verge of being snuffed out.

But, to his surprise and gratitude, his PCC mentors and instructors weren’t quite ready to give up on him. Letters of support started to pour in on his behalf. The judge in charge of his case, Clark recalled, stopped reading after about the 10th letter.

“Had I made the case on my own,” he said, “it wouldn’t have made a difference. Because of all the letters, the judge saw I was working toward something better and gave me another chance.”

The support from Gateway to College helped reduce Clark’s sentence to probation and a short time in jail. When he was released, the program welcomed him back with open arms. He returned to his studies with gusto, finished the program, and is now studying psychology at Portland State University, with a minor in Spanish. Along the way, Clark started working for the Gateway program.

He credits his success — and second chance — to the support he found in Gateway to College.

“They knew I was a good person before I did,” he said.

For more information about Gateway to College and other alternative high school programs, visit www.pcc.edu/prep.

x by Tim Bannister 7 years ago

I’m proud of you Adam and I look up to you a lot. You were a big part of my success during my first term in the Gateway To College program. Thank you for everything you have done for both me and the students around me at PCC.

x by Chris Seymour 7 years ago

Adam is awesome! Cheers to you, and the excellent people in the GtC program! ~Chris

x by Marie Mahon 7 years ago

Adam, I don’t know you very well but just being in Room 106 one day a week at SE, I can tell you are a valuable staff member in the Gateway to College Program.

x by Lauren Kuhn 7 years ago

Adam, you know I feel about you and your success. I think you have taken at least three classes from me, and you have excelled in them all. Your commitment to your academic and personal growth has been inspirational to many of us. You have very high self-efficacy – and continue to raise the bar for yourself. It is a pleasure to support you on the path you are on.