This content was published: June 13, 2012. Phone numbers, email addresses, and other information may have changed.

Portland Community College has hired Tony Broadous as the new head coach of the PCC men’s basketball team. A Portland native, Broadous comes to PCC from Grant High School, where he has been the head coach since 2002. 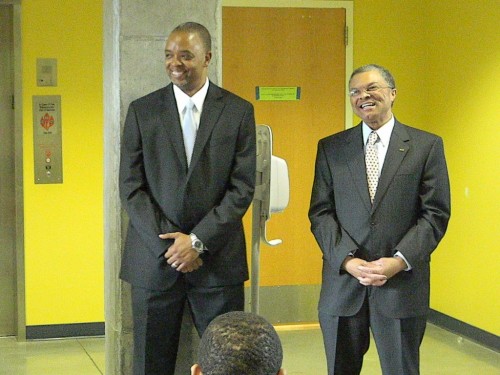 Portland Community College has hired Tony Broadous (left) as the new head coach of the PCC men’s basketball team. A Portland native, Broadous comes to PCC from Grant High School, where he has been the head coach since 2002.

Broadous was welcomed to the PCC family with a reception at the Cascade Campus Gym – the home court of PCC basketball – on June 12.

“We’re so excited to have Tony with us, and we’re looking forward to great things from him,” said Cascade Campus President Algie Gatewood at the reception. “Tony is a local guy, a native Oregonian, a longtime Portlander, and he’s just the guy to put PCC basketball on the map.”

Gatewood’s sentiments were echoed by PCC Board member Harold Williams.

“This is a great step forward for PCC athletics,” Williams said. “I’ve known Tony for a long time – he’s from this neighborhood and he’s a great fit for PCC basketball.”

Broadous’ new job represents a return to the neighborhood he has known since he was a boy. A Jefferson High School graduate, he grew up learning the game in the area around Cascade Campus, and even recalls playing games in the old Quonset hut that once served as the campus gym.

“I grew up less than five minutes from the Cascade Campus and rode my bike in the parking lot for years starting at the age of 7,” he recalled. “I vividly remember shooting around and playing games in the old gymnasium with my friends as we became teenagers.”

Broadous brings a wealth of experience to PCC as both a player and coach. After graduating from Jefferson, he went on to play basketball and baseball at Lane Community College, a member of the Northwest Athletic Association of Community Colleges, the same conference in which PCC plays. After his stint at Lane, he moved on to graduate from Oregon State University with a bachelor’s degree in sociology.

Prior to taking over head coaching duties at Grant High School, Broadous was the head coach at Roosevelt High School from 1997 to 2002. While at Grant, he was named Portland Interscholastic League Coach of the Year three times, and led the team to the Oregon 6A championship in 2008. He also worked with the Nike Global team in 2010.

In addition to his success as a coach, Broadous has a strong record of sending his players on to college after they graduate, something that bodes well for players in terms of continuing their educations once their time at PCC is over.

Accompanying Coach Broadous to PCC will be two of his longtime assistants, Aaron Bell and Tyrone White. Like Broadous, both men grew up in North and Northeast Portland and played their high school ball here – Bell for Benson High School and White for Jefferson. The similarities don’t end there – both men also played basketball in community college, Bell for Grey’s Harbor Community College in Washington State, and White for Chemeketa Community College in Salem, Ore.

Broadous will be at the helm when PCC’s basketball season kicks off this October. More information about the team, and the 2012-13 schedule, can be found at www.pcc.edu/about/athletics/.

“I want to build this program into a place where young men want to come; a place where they want to play ball and get started on their college education,” Broadous said. “I want this to someplace where the team mirrors the school in terms of excellence in all areas.”

x by David Bruesch 8 years ago

Good Luck with the program Mr. Broadous!Lots of talent around here hope you can do good things with it.Look forward to seeing you weather it be on campus or at a game.

x by Lisa Arceneaux 8 years ago

Welcome aboard Coach. It will be a pleasure to have you as a part of the PCC Goal of excellence.

x by Steven Wallenstein 7 years ago

Do you have to try out for the PCC Panthers or can I just show up and play? I am thinking about starting to exercise more and have always wanted to play full court basketball. I watched the Panthers one time and wasn’t sure if it was a “pick up game” situation like at 24 hour fitness. Also, do I need to buy a Panthers jersey or can I just swap with whoever I am subbing in for? Let me know.

[…] High students to earn college credit at Cascade while they’re still enrolled in high school. The Jefferson alum also loved basketball, helping procure new uniforms and saving athletics from the budget axe because he felt it too […]